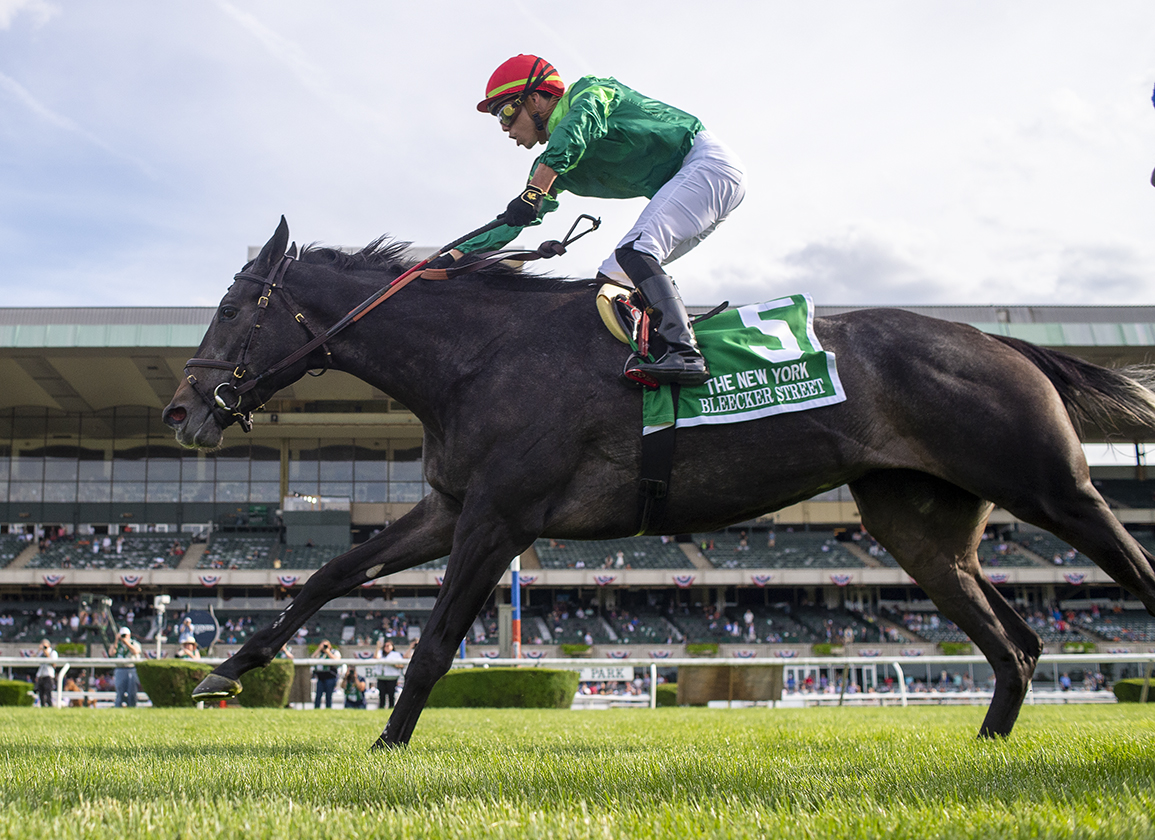 For a brief few moments in the stretch it looked like Chad Brown, represented by odds-on Rougir (Fr) (Territories {Ire}); six-for-six second choice Bleecker Street; and 9-2 third choice Virginia Joy (Ger) (Soldier Hollow {GB})–not to mention pacesetter Flighty Lady (Ire)–might not actually get his record-tying fourth New York S. trophy. But depth like that, and all for Peter Brant, is nearly impossible to beat, and Bleecker Street, perhaps the most unsung unbeaten horse in the country, flew home in last-to-first fashion to reach a new high.

Stretching out to 10 furlongs for the first time off of consecutive nine-furlong scores in the GII Hillsborough S. at Tampa Mar. 12 and as part of a productive weekend for Brown and Brant at Churchill in the May 6 GIII Modesty S., Bleecker Street was content to trail early as Flighty Lady was hard ridden to the first turn, but then only posted somewhat un-rabbit-like fractions of :24.54, :50.76 and 1:16.48. Family Way tracked a couple lengths behind that one and further clear of the rest of the field. Family Way took over heading for home, and Irad Ortiz, Jr. had a fistful of horse on Bleecker Street as he guided his mount to the far outside for clear sailing. Family Way still looked like a winner to midstretch as nobody near her really kicked it in, but Bleecker Street–sporting a red cap to distinguish herself from her three stablemates–zoomed home to be up in time.

“Her closing kick, especially with those slow fractions, was nice,” said Ortiz, who had also piloted newly named 'TDN Rising Star' Artorius (Arrogate) as well as GII True North S. runner-up Sound Money (Flatter) for Brown on the card. “Not too many horses can go around a slow pace, slow fractions, like that. I made a wide move to go around and she still got there. She gave me a good kick. She's very nice. They were backing up into me a little bit and they were a little slow and then everybody was sprinting home, so it was hard to catch them. But she got the job done.”

This was Ortiz's first time riding the winner–Flavien Prat hopped off her for Rougir.

“I had never ridden her before so I talked to Flavien and he gave me some tips, like she's pretty easy to ride and she's not too fast out of the gate,” Ortiz said. “I tried to find out everything I can about her. She was undefeated and I wanted to keep going with her. Now she's 7-for-7 and everything worked out perfect. Thank God.”

Brown, whose three prior wins in this event also include a 2019 score for Brant, said of the winner, “What a remarkable horse. I wasn't sure about a mile and a quarter. She finished her races like she would get it, but as you know, handicapping doesn't always work out that way. Just because they're closing and you keep on stretching them out, sometimes it has to do with pace, when they make their move and how long their move is. This filly does everything we put at her. What a remarkable horse–where she started and where she came from. She's moving up in the ranks of one of the better ones I've had.”

Bleecker Street began her career as a member of Brown's perceived “B team,” winning first out at Monmouth and clearing her first-level allowance condition at The Meadowlands. She was entered and withdrawn from last year's Keeneland November sale.

As for Rougir, last year's G1 Prix de l'Opera winner and most recently an impressive victress of the G3 Beaugay S. going shorter here, Brown said, “She just didn't fire today. She was in a good spot, always ahead of Bleecker Street. We didn't have any excuse. We'll go back to the drawing board. Maybe the softer ground in her form suggested [she prefers softer turf], but she certainly trained really well at Belmont.”

Pedigree Notes:
Bleecker Street becomes the 14th Grade I winner for Quality Road, and second for Brown and Brant, following in the hoofsteps of Dunbar Road. This is the first highest-level winner in North America out of a mare by Danzig's son Exchange Rate (he has three in South America).

Dam Lemon Liqueur (Exchange Rate) was a debut winner and stakes-placed juvenile for owner/breeder My Meadowview Farm and the late Rick Violette. She was acquired by Ben Berger's Branch Equine for $75,000 in foal to Honor Code at the 2016 Keeneland November sale and RNA'd at that auction two years later for just $19,000 after not being bred back following the foaling of Bleecker Street. Bleecker Street has a 2-year-old half-sister named Red Lemonade (Always Dreaming) who was bred by Delia Nash, a yearling filly by Flatter and an Apr. 6 foal colt by Not This Time.