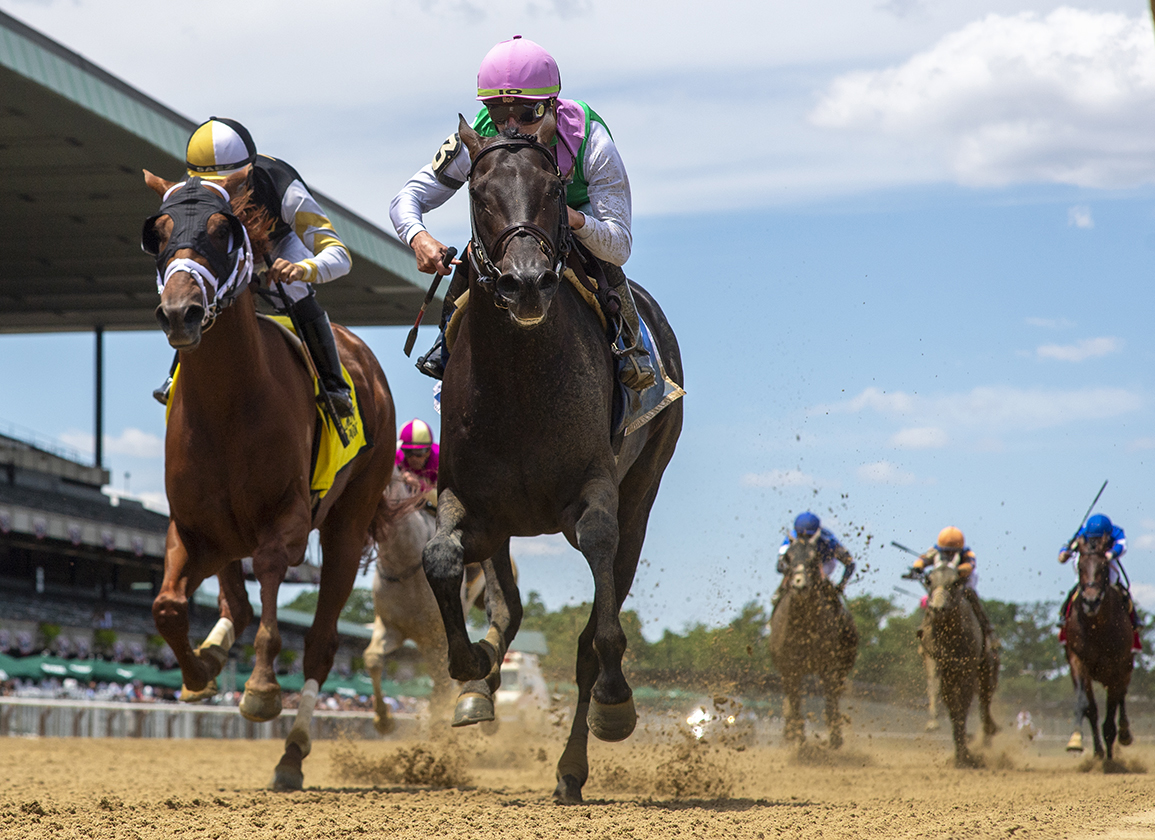 Juddmonte's Artorius (c, 3, Arrogate–Paulassilverlining, by Ghostzapper) backed up his highly impressive runner-up effort on his six-furlong debut behind 'TDN Rising Star' Under Oath (Speightstown) at Keeneland Apr. 16 with a similarly promising performance when stretched to a mile Friday at Belmont. His deceptively easy 3/4-length success over big-figure maiden Gasoline (Curlin x Yellow Agate) earns him the 'Rising Star' designation.

With the vanguard early, the dark bay eased back to sit third and on the fence behind a sharp opening quarter-mile in :22.98. Shuffled back one position to sit midfield past the half in :46.61, Artorius was back into the bit and ready to roll, but in need of running room as the field hit the top of the stretch. The gap came one off the inside with a bit more than a furlong to travel, and Artorius took it professionally, but wanted to run around a bit at the eighth pole. The colt received a few reminders from Irad Ortiz, Jr. and held sway to win narrowly, albeit comfortably, in racehorse time. Gasoline, who finished a neck behind subsequent Texas Derby winner King Ottoman (Curlin) in a May 7 Churchill maiden going this one-turn mile configuration, prompted the pace throughout and boxed on gamely once passed in another high-class outing.

Artorius is the first foal out of Paulassilverlining, a four-time graded winner and third in the 2016 GI Breeders' Cup Filly and Mare Sprint for her breeder Vince Scuderi, then was acquired privately by Juddmonte prior to her 5-year-old season in 2017, with an eye on a future mating with Arrogate. The plan paid immediate dividends when Paulassilverlining won the GI Madison S. and GI Humana Distaff S. in her first two appearances in the legendary Juddmonte green-and-pink before her retirement at the end of that campaign.

Arrogate's Artorius (@JuddmonteFarms silks, inside) on his way to @theTDN Rising Star honors in the Belmont opener. Was recently featured in our 'Second Chances' series. https://t.co/eqkGwKs6Jb pic.twitter.com/Ku5BaNQX9x