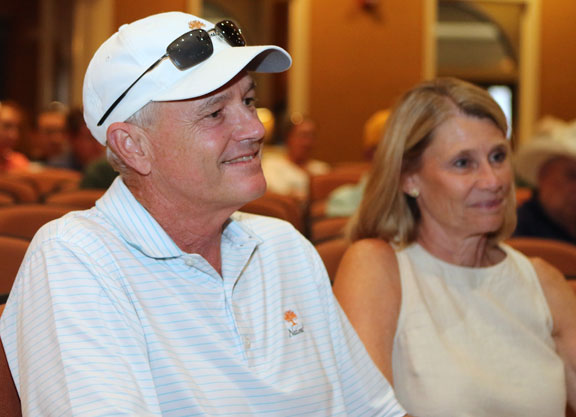 For the American Graded Stakes Committee, 2020 presented challenges unlike anything it has faced before as the pandemic played havoc with racing schedules and caused the cancellation of numerous stakes. The TDN sat down with the committee's chairman Everett Dobson to discuss the challenges, why it made the changes that it did for 2021 and what might in store for future years.

TDN: Take us through what the process entails when it comes to evaluating stakes races. What are the numbers that you crunch?

ED: We look at a tremendous amount of information. The Jockey Club puts together an enormous amount of what I call objective analytical data that we go through. There are a variety of data points. The objective information that we look at is on the TOBA website, if anyone wants to take a look at it. From that, you get a pretty good indicator of the relative strengths of a race. We look at it over a five-year period and look at the relative performances of the horses over what is now 15 divisions. We actually look at every single race. With some, we don't feel compelled to look too long. An example would be the Breeders' Cup Classic. It doesn't warrant much discussion when it comes to whether or not it should be a Grade I race. It's the same for the Kentucky Derby and a few other races.

TDN: In what was a very unusual year, there were several major stakes, for instance, the Arlington Million and the Pennsylvania Derby, that were not run. Did that throw a wrinkle into things and how did the committee deal with this set of circumstances?

ED: We had 69 graded stakes that weren't run in 2020. There were another 63 listed races that were on the calendar that weren't run. So, 132 total stakes races were not run. Yes, that threw a wrinkle into things. Despite that, we still went through the process and looked at those races. While 2020 was an exceptional year, we still had a fair amount of data for each of those individual races. We felt like we owed it to the tracks, those races, the owners, trainers, breeders and everyone involved to take a look at those races.

TDN: Because of the COVID-19 shutdowns, there was a period when some tracks were the “only game in town” and their stakes races were actually much stronger than normal. How did the committee deal with that issue?

ED: We had a separate call among the committee members a couple of weeks before the session actually started to discuss that very issue. How were we going to approach the process this year? We decided to be somewhat cautious about giving a race too much credit when it came to evaluating it off just the one year. We didn't want to significantly reward a race because of COVID or the impact of the COVID effect. In the United States, we have a committee that discusses and analyzes and debates the relative merits and strengths of a race. While we do have objective analytical data points, we ultimately use our collective wisdom to assign the grade of the race for the following year. We made a conscious decision to not overly penalize a race or reward a race if it was clear there was a COVID impact on that race.

TDN: There were few changes for 2021. Is there any particular reason why?

ED: There were undoubtedly fewer changes than normal, whether a race was promoted up or down. The answer is, that was the result of our decision to be cautious because of COVID. That resulted in fewer changes.

TDN: There were a handful of stakes this year, including Grade I events, where the quality of the fields was disappointing. Are there any races that are on the committee's radar that might be nearing the point where they are in jeopardy of being downgraded?

ED: The answer is yes. We actually meet no less than four or five times a year in between the session where we assign the grades. In those meetings, we discuss a lot of what we are seeing in terms of trends within the races we will be asked to analyze. Those trends include things like a situation where certain geographic areas are seeing smaller fields in their stakes races. We will discuss and analyze whether something like that is having an impact on quality. Are races being impacted because of where they are positioned on the calendar opposite other races? We look at field size across the board. We've noted that field size in turf races has gone up. That has had some influence on the quality and strength of those fields. We look at the size of the foal crop. We've had a significant reduction in the size of the foal crop over the last 20 years. But interestingly enough, the size of the foal crop in Kentucky is actually pretty flat. We do an enormous amount of analytical research and have a tremendous amount of discussion about what we are seeing. We like to see the big picture.

TDN: In recent years, the committee has let it be known that it recognizes that the foal crop has gone down, that top horses race less frequently than they used to and, because of this, there is an overall need to downgrade races or take graded status away from some races. Have those adjustments now been made or is that still a work in progress?

ED: We see a little bit more stability in the foal crop, despite it being down. But there are still legitimate concerns about the foal crop as it relates to the strengths of the stakes over time. Yet, the rate of decline, if you will, has subsided quite a bit, particularly when you consider that the foal crop out of Kentucky is relatively flat over the last five or six years. In our minds, that bodes well for the relative quality. That's not to say that markets like Florida and California, where there has been significant reductions in the foal crops, aren't a concern. It is. But Kentucky is relatively stable, and that helps.

TDN: This year, there were some complaints from Kentucky Downs, which felt it had been treated unfairly by the committee. They must be happy since they had more races upgraded than any track. Could you address their situation and why these upgrades didn't happen sooner?

ED: In some cases, it was a matter of it taking a two-year renewal of a race for us to consider it for a grade. Why it hadn't happened sooner? I can't really answer that question without breaking down individual races, looking at the divisions and how a race stacks up against other races. Kentucky Downs, obviously, is a tremendous bright spot in our sport right now and we are thrilled at what they are doing. We certainly see the relative strength of turf racing in the U.S. improving. We are benefitting across the board when it comes to turf racing with all the European horses coming to the U.S. to run, and some of those horses wound up running at Kentucky Downs. Overall, turf racing in the U.S. is doing very well and Kentucky Downs is a significant bright spot when it comes to that.

TDN: In the past, the committee had made it known that it might take a stand when it comes to Lasix. One possibility has been that stakes races run with Lasix will lose their grading. With so many tracks disallowing Lasix in their stakes for 2021, is the committee once again thinking of penalizing stakes where the medication is still allowed?

ED: I hate to say this, but this is a topic I cannot comment on…maybe for obvious reasons.

TDN: The committee members have a pretty thankless job and, at the end of the day, a lot of people are not happy with some of the decisions that it makes. What can you tell people so that they are more sympathetic when it comes to the challenges the committee faces?

ED: I'll go back to my opening comments. We have 11 dedicated people on the committee that are enormously knowledgeable about the sport, their heart is in the right place and they work really hard. It takes me a good week to prepare for the grading session. It takes a tremendous effort to be prepared to go into those sessions and be able to have a knowledgeable discussion about individual races. I think we do it the right way and analyze things the right way. In other countries around the world, they take a number and do their analysis based on something like speed ratings. They take the human element out of it. When you do that, how do you evaluate things like what happened in 2020? That's exactly where you need people with knowledge of the sport to come in, weigh in and make the right decisions. We have five racing secretaries on the committee that are spread around the country and represent different tracks. They leave their badge back at home. They work really hard when it comes to being fair and assigning the grades as they should be. Everybody works exceptionally hard to get to the right answer.