Put A Ring Around Speightstown's Olympiad at the Spa 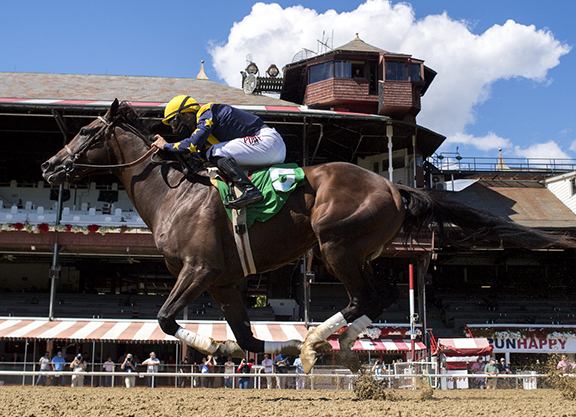 5th-Saratoga, $72,000, Msw, 9-5, 2yo, 7f, 1:22.78, ft.
OLYMPIAD (c, 2, Speightstown–Tokyo Time {GSP, $249,177}, by Medaglia d'Oro), off as the 2-1 chalk to improve on a distant debut third to 'TDN Rising Star' Reinvestment Risk (Upstart) Aug. 1, broke running and raced prominently from third and three off the inside just off an opening quarter-mile in :22.80. Traveling sweetly on the turn, the $700,000 Keeneland September yearling came calling for the lead in upper stretch and finished nicely to graduate by a little more than two. The second most-expensive of 38 of his outstanding sire's progeny reported as sold in 2019, Olympiad is bred on a wildly successful cross over Medaglia d'Oro that has been responsible for Grade I winners Rock Fall and Competitionofideas. Another of Speightstown's top-level winners, She's Happy (Arg), was produced by a Sadler's Wells mare. 'TDN Rising Star' Shirl's Speight was produced by a daughter of Perfect Soul (Ire). A half-sister to multiple graded-stakes winner Hungry Island (More Than Ready) and GSW Soaring Empire (Empire Maker), Tokyo Time produced a filly by Quality Road in 2019 followed by a War Front filly this term. She was bred back to American Pharoah. Sales history: $700,000 Ylg '19 KEESEP. Lifetime Record: 2-1-0-1, $48,240.
Click for the Equibase.com chart or VIDEO, sponsored by Fasig-Tipton.
O-Grandview Equine, Cheyenne Stables, LLC and LNJ Foxwoods; B-Emory A. Hamilton (KY); T-William I. Mott.