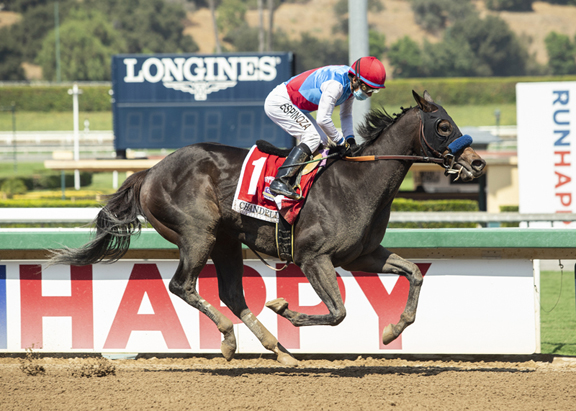 Making her two-turn debut following an eye-catching debut win at Del Mar Aug. 22 and runaway score in the GI Del Mar Debutante S. Sept. 6, the $1.35-million OBS Spring topper wasn't the quickest away from her rail draw beneath Victor Espinoza.

She rode the rail into the first turn, but was no better than third. Princess Noor did not appear completely at ease being stuck down inside, but she jumped into the bridle when taken out into the three path, quickly making progress to sit second into the final turn.

She easily claimed the front-runner with about five-sixteenths of a mile to race and was not asked for her best in strolling through the final 100 yards en route to an 8 1/4-length victory. Stablemate Varda (Distorted Humor) was second.

“When you are in the one hole, they usually don't break as well, but I think Victor rode her with a lot of confidence,” Baffert said. “He's been on enough good horses and he knows. This filly is just incredible and very talented. I don't train her as hard and I run her into shape. You never know if they can go two turns until they do and it looks like that's not going to be a problem.”

Princess Noor drew high praise from her rider as well.

“She reminds me of other great horses I used to ride like American Pharoah and California Chrome,” Espinoza said. “The talent is there, we just have to let them be happy around the racetrack. I've been riding amazing horses, but as a filly, she's the best one I've ever ridden.”

It's a contentious race between the top three freshman sires of 2020, with each sporting two black-type winners to date and their earnings all within range of each other. Not This Time, a son of Giant's Causeway, leads the list by individual winners with 11 and has two undefeated stakes winners in Princess Noor and Dirty Dangle, who won last week's Woodbine Cares S., plus the Grade III-placed Hopeful Princess.

Princess Noor made headlines before she even ran as Not This Time's most expensive sales horse to date when she brought $1.35 million at OBS this spring (:20 1/5), but Not This Time hasn't done badly in this curtailed yearling sales season either, with 32 sold this year in North America for an average of $135,504 on a $15,000 stud fee. Princess Noor was previously a $135,000 KEESEP yearling.

Princess Noor is out of the 2014 GIII Senorita S. winner Sheza Smoke Show, who has a yearling colt named Protonic Power (Protonico) and delivered a filly by Tapwrit this year. She was bred back to Protonico for 2021. International Equities Holding purchased Sheza Smoke Show, carrying Princess Noor, for $185,000 at the 2017 KEENOV sale.