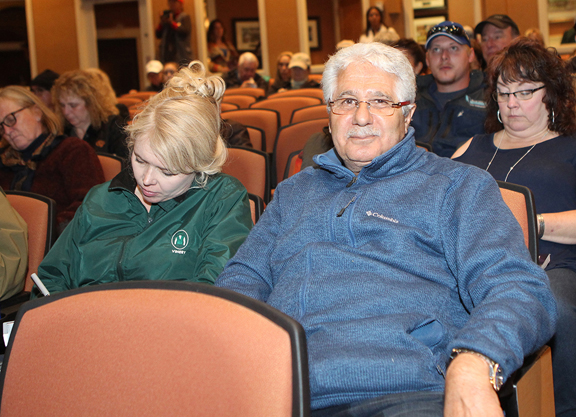 LEXINGTON, KY – When Oussama Aboughazale purchased the former Belvedere Farm in Paris, Kentucky four years ago, he immediately began building a broodmare band for the 235-acre property. Those initial investments are now finding success both in the sales ring–where the operation was represented by its first $1-million yearling in 2019–and on the racetrack where Princess Noor (Not This Time), bred by Aboughazale's International Equities Holding, recently won the GI Del Mar Debutante.

“I loved Kentucky from the first time I came here more than 20 years ago,” Aboughazale, born in Jerusalem and previously based in Chile, said of the decision to begin operations in the Bluegrass. “I fell in love with it. I said, 'I want to have the Kentucky passport.'”

With the help of bloodstock manager Frances Relihan and farm manager Jody Alexander, Aboughazale purchased 11 mares at the 2017 Keeneland January sale and a further five mares at that year's Keeneland November sale. The plan, according to Aboughazale was to find quality that was just under the radar.

Relihan added, “We feel that buying a good physical is one of the most important things we can do. And then we gauge from there to see how much pedigree we can afford with that.”

Among the mares purchased that January was Brushwork (Discreet Cat), who was in foal to Kitten's Joy and sold for $150,000. Shadwell Estate Co. bought the mare's Kitten's Joy colt for $750,000 in September 2018.

The group of mares purchased in November 2017 included Sheza Smoke Show (Wilko), in foal to Not This Time, who was acquired for $185,000

Asked what he liked about the mare, Aboughazale smiled knowingly and said, “As I told you, cousins of Angelina Jolie.”

Sheza Smoke Show won the 2014 GIII Senorita S. and is the daughter of stakes winner Avery Hall (A. P Jet).

“She could run and she had speed,” Relihan said of the mare's appeal. “And the mating was a nice cross for her physically. When you buy a mare, you're buying that foal she's carrying, that investment and it's always good to like the mating because it puts you one step ahead when you get that foal on the ground before you breed her back.”

Sent through the ring at Keeneland last September, the mare's Not This Time filly sold for $135,000.

“We always liked this filly, but Not This Time was not well known at the time and we thought we got very good money for her,” Aboughazale said of the result. “She was very nice. Then when she started training, she was a monster.”

The filly worked a lights-out quarter-mile in :20 1/5 before topping the OBS Spring sale when selling for $1.35 million.

Asked if he regretted selling the filly when he saw her results at OBS, Aboughazale laughed heartily and said, “Yes, of course. But thanks God, my best friend, he's like a nephew to me, he bought her. He paid a lot of money for her.”

The filly, now named Princess Noor, was purchased by Saudi businessman Amr Zedan. She was a dazzling debut winner in August before taking the Del Mar Debutante last week.

“I have known him since he was a kid. He calls me uncle,” Aboughazale said of Zedan. “He didn't know at first that I had bred the filly. He didn't find out until later. But he called me and said, 'Uncle Oussama you know who bought this filly?' I am very happy for him. I hope she becomes a champion. I believe in God, I believe whatever happens in your life is decided by God. So God decided we should not have her, that somebody else should have her.”

“The Protonicos, nobody will buy them,” Aboughazale said ruefully. “He is beautifully bred and a beautiful horse. I love him so much. I am backing him, I am giving him every year a minimum of 10 good mares. And the best of all the yearling colts now who will go for training is Sheza Smoke Show's son. They will go for breaking at the end of the month.”

Sheza Smoke Show also has a weanling filly by Tapwrit and was bred back to Protonico this year. Plans for the weanling are still up in the air.

“Possibly,” Relihan said when asked if the filly would go through the sales ring. “We will monitor Princess Noor's progress and decide that and who to send the mare to.”

Despite a slower market, International Equities Holding has already had a pair of strong results in the sales ring this week in Lexington.

Through the Gainesway consignment, the operation sold a colt by Gun Runner (hip 570) for $500,000 to trainer Jeremiah Englehart. The yearling is out of Divine Dawn (Divine Park), a mare purchased for $285,000 at the 2017 Keeneland November sale.

“That's the second foal out of the mare,” Relihan said. “We bought her in foal to Nyquist, so Mr. Aboughazale is going to race that filly, she's a 2-year-old. The Gun Runner was just such a good commercial filly, very correct, she is a May 1 foal and had everything. Those kind of fillies you can take to market.”

During Sunday's first session of the Keeneland September sale, Aboughazale sold a filly by Curlin (hip 138) for $600,000 to bloodstock agent Mike Ryan. The yearling is a granddaughter of Aboughazale's Chilean champion Wild Spirit (Chi) (Hussonet), who traveled stateside to capture the 2003 GI Ruffian H.

“When you get one that looks like her, you have to keep the cash flowing,” Relihan said of the decision to sell the yearling.

The International Equities Holding broodmare band currently numbers about 40 head and Aboughazale admitted that's about as many mares as his farm can hold. He expects to offer all his foals at auction, but is ready to take them home if need be.

Relihan added, “We have to take them to market to prove to the market that Mr. Aboughazale is breeding good, quality stock. Sometimes in the past, Mr. Aboughazale kept the best and sold some of the ones that weren't that good. But now he's taking good product to market.”

International Equities Holding still has a handful of offerings to come as the Keeneland September sale moves into Book 2 Wednesday. Through the Taylor Made Sales Agency consignment, it will offer a filly by Pioneerof the Nile (hip 535), a colt by Empire Maker (hip 702), and a colt by Nyquist (hip 790).

“We have some nice horses coming up in Books 2 and 3,” Relihan said. “If they don't bring a good market value, we have the luxury that Mr. Aboughazale can race, he has a racing operation. If they don't bring what we think they are worth, then we go to Plan B.”

Aboughazale, an exporter of fruit from South America and a majority shareholder of the fresh produce division of Del Monte Fruit Company, was perennially a leading owner in Chile, but he expects his Kentucky operation will eventually take over.

“In the long run, I will close Chile and I will concentrate on Kentucky,” he said.

The uncertainties in the market caused by the global pandemic and several major foreign buyers missing from the results sheets so far at Keeneland may make selling yearlings more difficult, but Aboughazale may be ready to strike at the November breeding stock sales if the market continues to be weak.

“I think maybe this year we will buy Angelina Jolie in this market,” he said with a laugh.

Following a dark day Tuesday, the Keeneland September sale continues with the first of two Book 2 sessions Wednesday at 10 a.m. The auction continues through Sept. 25.