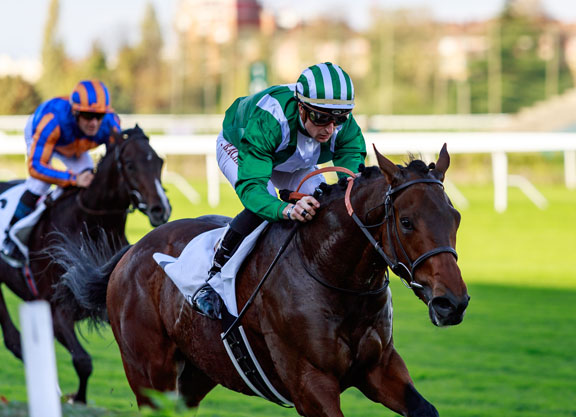 Needless to say, the pecking order has changed considerably in the ensuing years and Makfi's innings in Europe was limited to six seasons–four at Tweenhills Farm And Stud and then two at Haras de Bonneval–before an offer from Japan was accepted in October 2016. His final European crop is therefore two years old, and his son Mkfancy (Fr) has provided the 2010 G1 2000 Guineas and G1 Prix Jacques le Marois winner with a fitting valediction with his front-running victory in the G1 Criterium de Saint-Cloud.

While it is hard to know what to make of the Saint-Cloud form, Mkfancy comfortably repelled a pair of well-connected Camelot (GB) colts from Ballydoyle. His record now stands at two clear-cut victories from three starts, his single defeat being his third behind the 'TDN Rising Star' and future G1 Prix Jean-Luc Lagardere winner Victor Ludorum (Ire) (Shamardal) in a Longchamp newcomers' race.

The inescapable fact regarding Mkfancy's form is that both his wins have been gained when the ground was very soft or heavy, and it is tempting to pigeon-hole him as a soft-ground specialist. To do so may be misleading, as I will explain later, but there is a strong link between the colt's sire line and soft-ground success.

Makfi handled bottomless conditions better than most. Having been culled by Shadwell as an unraced 2-year-old for 26,000gns almost exactly 10 years ago, Makfi made his debut for his new trainer, Mikel Delzangles, a month later when he won a Class F newcomers' race at Fontainebleau in November on very soft ground. The ground was again very soft when his Classic aspirations were put to the test in the G3 Prix Djebel on his reappearance at three and he passed the test with an easy three-length success. The slow conditions failed to blunt his acceleration.

Makfi was also victorious on the only other occasion when he tackled very soft ground, cutting down the great Goldikova to take the Jacques le Marois. Makfi wasn't a one-trick pony, though, as he'd already demonstrated in the 2000 Guineas on good to firm going. Dismissed at 33/1, he had again quickened well to thwart the Hannon pair of Dick Turpin (Ire) and Canford Cliffs (Ire). Clearly, he was at home on quite a wide range of underfoot surfaces.

That said, I thought his appreciation of testing conditions would prove beneficial in his move to Haras de Bonneval, as soft ground is very common on France's racecourses. Also, French breeders were likely to be very appreciative of his bloodlines, as Makfi had followed his sire Dubawi (Ire) and grandsire Dubai Millennium as the third successive generation of his male line to win the Jacques le Marois.

The ground had also been very soft back in 1999 when Dubai Millennium contested the Deauville Group 1 and Timeform went so far as to call it heavy. The Godolphin colt relished the conditions and made all the running to hand out a hefty defeat to Slickly (Fr) and Dansili (GB). The ground was also soft when Dubai Millennium romped home six lengths clear in the G1 Queen Elizabeth II S., but he too could handle faster conditions. The Racing Post considered the ground to be good to firm when Sheikh Mohammed's superstar won a conditions race by nine lengths and the G1 Prince of Wales's S. by eight.

Dubawi never encountered really soft ground during his eight-race career, but he hinted that he too would have handled it well. It was good to soft when he landed the 2005 Jacques le Marois, and also when he took the G3 Superlative S., while the going was described as yielding when he won the G1 National S.

Interestingly, Dubawi's action was described by Timeform as short and choppy, and the Halifax experts had previously commented that Dubai Millennium had a short, unimpressive action. The Racing Post's statistics for Dubawi show that his progeny have won 19% of their starts on heavy and 28% on soft. The figures for Pivotal (GB), a stallion whose progeny are renowned for their liking for very soft ground, are 23% on heavy and 30% on soft, so Dubawi's figures aren't very far behind. Again, though, that is not to say that the Dubawis aren't similarly effective on good to firm ground.

Among Dubawi's winners on very soft or heavy are Al Kazeem (GB), Coronet (GB), Hunter's Light (GB), New Bay (GB), Postponed (Ire), The Revenant (GB) and Zarak (Fr), while Night of Thunder (Ire) won both his juvenile starts on soft and later failed by only half a length to win the G1 Queen Elizabeth II S. on heavy.

Makfi isn't the only member of this male line to have enjoyed success during the recent spate of rain-soddened ground. Night of Thunder's first-crop daughter Pocket Square won the G3 Prix des Reservoirs on heavy. Then there's Makfi's G1 Poule d'Essai des Poulains winner Make Believe (GB), another successful first-crop sire who is responsible for Ocean Fantasy (Fr), a Group 3 winner on heavy in Germany, and Tammani (GB), a listed winner on heavy at Deauville. Make Believe was himself successful on heavy. Dubai Millennium's son Echo of Light (GB) figures as the broodmare sire of King of Change (GB) (Farhh {GB}), who defeated The Revenant to take the Queen Elizabeth II S. on heavy.

As I have tried to stress in this article, the ability to act on very soft ground doesn't necessarily mean that the horse in question will struggle to handle much faster conditions. Mkfancy's broodmare sire, Muhtathir, showed his best form on good to firm and firm, notably springing a surprise in the Prix Jacques le Marois of 2000 (a race which had been the target for the same operation's Dubai Millennium until he suffered a fracture eight days before).

Mkfancy's dam Fancy Green (Fr) won a 15-runner newcomers' event over a mile at Compiegne in the June of her 3-year-old season and she has now produced a Group 1 winner as her second foal. Mkfancy's second and third dams both failed to produce any black-type performers but third dam Mountain Spirit (Ire) had the distinction of coming from a very successful Wildenstein family. Her dam Martingale (GB) produced the G1 Prix Saint-Alary winner Muncie (Ire), as well as Mersey (Ire), a high-class staying filly who won the G1 Prix Royal-Oak. Martingale in turn was a half-sister to several major performers, including Mount Hagen (Fr) (G1 Prix du Moulin) and the top filly Madelia (Fr) (G1 Poule d'Essai des Pouliches and G1 Prix de Diane).