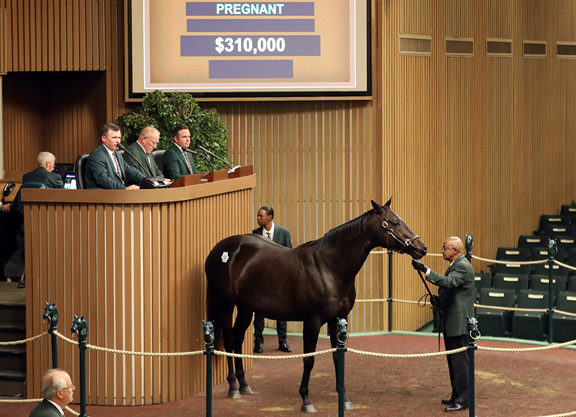 Patrick Masson purchased Ultimate Cause (Giant's Causeway) for his family's Green Lantern Stables for $310,000 from the Bluewater Sales consignment. Lynn Hancock matched that bid later in the session when purchasing Ducru (Broken Vow) on behalf of her family's Stone Farm from the Runnymede Farm consignment.

Andrew Cary was active as a seller through Select Sales and as a buyer, signing for a pair of mares on behalf of Coteau Grove Farms.

“It's still strong on quality,” Cary said of Saturday's market. “I think there is always a transition from book to book, some of the mares that are in that middle range are a little soft–I'd say in the $40,000-$80,000 range. People are probably not exactly sure what to appraise them at. I think you are still seeing huge demand for quality. And foals are still selling great. I think the momentum is going to continue, but there is always a bit of a feeling-out process when you transfer from the early books and on.”

The Keeneland November sale continues through Nov. 17 with sessions beginning daily at 10 a.m.

Ultimate Cause to Green Lantern

Ultimate Cause (Giant's Causeway) will be joining the broodmare band at the Masson family's Green Lantern Stables after Patrick Masson purchased the 6-year-old mare (hip 1301) for $310,000 at Keeneland Saturday. In foal to City of Light, she was consigned to the sale by Bluewater Sales on behalf of Kirk Wycoff's Three Diamonds Farm.

“I liked her physically,” Masson said of the mare. “She had a really nice shoulder, a deep girth, and a very nice hip. We hope that she'll produce really nice horses.”

Ultimate Cause is a daughter of graded stakes winner Supreme (Empire Maker) and from the family of GI Kentucky Derby winner Monarchos.

She was Masson's second purchase at the November sale. He purchased Criminal Mischief (Into Mischief) (hip 981) for $240,000 during Friday's session of the auction.

“I got outbid on every single mare except the one yesterday and this one today,” Masson said. “I believe we are done at this point in time.”

“We try to be as commercial as we can be, but at the end of the day, all we really want to do is produce and breed a really good racehorse,” he said. “The ultimate goal is to breed a good racehorse and then the commercial market will follow after that. I think if you breed a good physical, whether it's by Tapit or War Front, or anyone that is under $50,000 or $20,000 or $10,000, if you have a good physical, you can sell the horse. If you just try to breed a racehorse, I think you'll be ok.”

Three Diamond Farms claimed Ultimate Cause for $35,000 out of a sixth-place effort at Saratoga last July in what was the mare's final race.

“My son [and stable manager] Jordan really gets the credits for claiming her,” Wycoff said Saturday. “We actually claimed her twice. We claimed her, lost her, and claimed her again.”

Asked what the mare's appeal was, Wycoff said, “She is by Giant's Causeway–he's a great broodmare sire. And we knew her half-sister Tillie's Lily (Distorted Humor) had run some very fast numbers. We thought Jonathan Thomas might get [Tillie's Lily] stakes placed, so that was our incentive to claim her.”

Three Diamonds Farm is no stranger to parlaying claims into graded stakes success. Most famously, the operation claimed Bigger Picture (Badge of Silver), who went on to win the 2017 GI United Nations S.

“Everything we claim is really to run,” Wycoff said. “We usually claim more geldings than fillies. So it's very odd that we would have a filly that we end up breeding just because she's at the end of her racing career. All of the fillies we have that are stakes winners, we keep as broodmares.”

Ducru (Broken Vow), who topped her Book 4 session of last year's Keeneland November salewhen selling for $300,000 while in foal to Violence, was again a session-topper at the auction when bringing co-top bid of $310,000 from Stone Farm's Lynn Hancock Saturday in Lexington. The 5-year-old mare, a half-sister to multiple graded stakes winner Unified (Candy Ride {Arg}), was in foal to Good Magic. She was consigned by Runnymede Farm.

“She is a Broken Vow mare and we love the family,” Hancock said after signing the ticket on hip 1433. “Way back there, it's a Ned Evans family and he was a good friend of my dad [Arthur Hancock]. We actually bought Saintly Sister (Saint Liam) out of [second dam] City Sister (Carson City) from his dispersal. So it's a really good family–Unified is an exciting young stallion. She's beautiful and she acted right. And we loved the weanling.”

Ducru followed her Violence weanling colt into the sales ring Saturday. The chestnut foal, bred by Grandview Equine, RNA'd for $57,000.

“We were hoping for that kind of price,” Runnymede's vice president and general manager Romain Malhouitre said of Ducru's $310,000 price tag. “She was popular over the last two days at the barn. We had the right people from around here and around the world looking at her. Everything worked perfectly and we are happy with the price. I would like to thank the owners who trusted us with this mare. She has been a hell of a mare. She obviously had a nice foal by her side who helped her sell as well.”

A filly from the first crop of Grade I winner Mastery was the top weanling of Saturday's session of the Keeneland November sale, selling late in the day for $220,000 to Lynn Alexander's Alastar Farm. Bloodstock agent Bruce Wilkinson, whose brother Jack is the Alastar manager, made the winning bid on the weanling (hip 1509).

“He might race her, he might run her back [through a sale],” Wilkinson said. “But he'll very likely keep her. He likes to race in California. He's not afraid to roll the dice.”

The weanling is out of graded-placed Jungle Tale (Lion Heart). She was consigned by Claiborne Farm.

“She was the only chestnut Mastery I've seen and I've seen most of them,” Wilkinson said of the weanling's appeal. “It's like he's stamping them, but this was the best I've seen. She had the physical presence and the demeanor. And I think Mastery is just going to blow the roof off.”

Alastar Farm has now purchased four weanlings and three mares at the Keeneland November sale. Hip 1509 was the operation's second weanling purchase by Claiborne's Mastery, having already paid $95,000 for another filly, hip 465.

Mares in Foal to City of Light in Demand

Through the first week of the Keeneland November sale, mares carrying foals from the first crop of multiple Grade I winner City of Light (Quality Road) have generated plenty of competition. Through Saturday's session, 22 mares in foal to the Lane's End stallion have sold for $5,535,000 at an average of $251,591. In addition to Saturday's $310,000 co-session topper purchased by Green Lantern Stables, the stallion was also represented by a $410,000 in-foal mare purchased by Claiborne Farm, agent, earlier in the week.

The results are no surprise to Lane's End bloodstock agent David Ingordo.

“City of Light has been as popular a first-year horse, now going into his second year, as we've had at Lane's End in my time there,” Ingordo said. “He's a fantastic physical. His race record is impeccable. He is just the whole package. Last year, people were trying to get mares in and couldn't, so I think it created great demand to buy them. I bought a couple that I'm ecstatic about.”

City of Light was a three-time Grade winner on the racetrack. He captured the 2018 GI Triple Bend S. and GI Breeders' Cup Dirt Mile before capping his career with a dominant victory in the GI Pegasus World Cup Invitational in January. He stood the 2019 breeding season at $35,000.

“I love everything about him,” Cary said of City of Light. “He's gorgeous, he's by a great sire who is going to continue to get better. And he was a heck of a racehorse. So I think he ticks all of the proverbial boxes. I think Quality Road is going to be a big-time sire for a long time. I'm a big supporter of Klimt (Quality Road), as well. I think the whole sire line is big, they're fast, they're great looking, and they sell well.”

Cary admitted he had been outbid on several other mares in foal to the stallion this week.

“I'm glad I got them bought earlier this week,” he said. “I think now the momentum is really growing for the ones that are in foal to him–today is showing that. I'm a huge fan and I think he has a great shot to be a leading sire.”

Beyond those three mares, Cary has been busy buying for Keith and Ginger Myers's Coteau Grove Farms. He has purchased seven mares for the Lousiana-based operation for a total of $940,000 and an average of $134,286.

“They are based in Louisiana, but their horses can sell anywhere,” Cary said. “And then they have the Louisiana program in their backyard as a Plan B, so to speak. But it's just showing that you can raise really good horses down there as well. They do everything top class.”

“Selling that filly for $400,000 showed them that they can play in that part of the market,” Cary said. “I think that was a great result and kind of encouraged them to upgrade a little bit more. So they are expanding a little bit and upgrading a little bit.”

Cary continued, “I'm just following a few up and seeing if they fall in the right range. Today, I bought a mare [Silks and Tassels {Elusive Quality} (hip 1240)] in foal to Honor Code from Mitole's family that's got some potentially big updates coming. So we're looking for mares with good pages and good physicals that have some more upside in the family.”