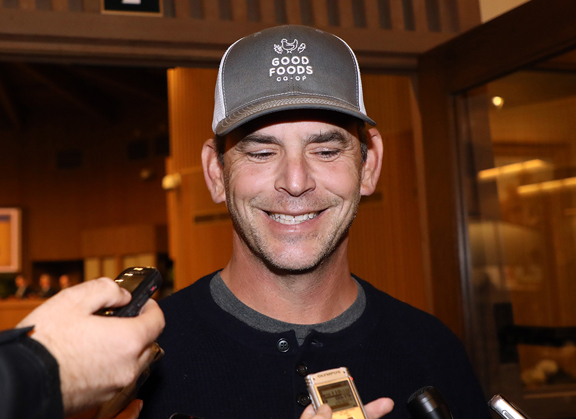 A colt by Kantharos (hip 2380), consigned by Hunter Valley Farm, had the day's highest weanling price tag when selling for $180,000 to Magnolia Farm.

In all 14 horses sold for six figures Sunday, bringing the two-day Book 4 total to reach that threshold to 26.

Keeneland will offer horses of racing age during its Monday and Tuesday sessions of the November sale. The auction runs through Friday with sessions beginning at 10 a.m.

Ducru (Broken Vow), who sold for $150,000 at the Keeneland January sale last winter, returned to the ring at Keeneland Sunday in foal to Violence and sold for $300,000 to bloodstock agent Jason Litt.

“We have clients who have shares in Good Magic, so we bought her to breed to Good Magic,” Litt explained. “She was a standout here. She's absolutely beautiful and from a very precocious family. We think it's a really perfect mating for him. He is a beautiful horse and talented and all we need to do is to find something that won't get in his way. And she is the right type.”

The 4-year-old mare (hip 2430) is out of stakes-placed Union City (Dixie Union) and is a half-sister to multiple graded stakes winner Unified (Candy Ride {Arg}). She was consigned by Hill 'n' Dale Sales Agency.

Bloodstock agents Nick Sallusto and Hanzly Albina signed the ticket on the mare at the Keeneland January sale on behalf of Steven Marshall of Black Rock Thoroughbreds. Sallusto was the first over to congratulate Litt on the purchase.

“Our plan was to do exactly this,” Sallusto said. “We wanted to buy her potentially for Violence because [Marshall] owns many shares in him. So we were looking for mares who would be compatible to use our seasons. We wanted to use them and not sell the seasons. The plan was to offer her and, if she brought what we felt was acceptable money, to sell her.”

Of Sunday's result, Sallusto added, “We're very happy with that. It's hard to double your money in any market in that short amount of time.”

Waters Parts With the Nyl

Mike Waters purchased a bay filly by Pioneerof the Nile for $35,000 at the 2017 Pegasus sale, named her Princessof the Nyl and watched as she carried the colors of his Muddy Waters Stables to an eight-length victory in this year's Washington Oaks. Waters decided to test the market with his stakes-winning filly Sunday at Keeneland and was rewarded when the 3-year-old (hip 2613) sold for $200,000 to Dixon Enterprises.

“We had had a lot of interest in her,” Waters said of his decision to offer Princessof the Nyl at the November sale. “People were calling about possibly buying her. She ran really well for us as a 3-year-old and we thought we'd try to sell out and she what she'd sell for. She sold for a good number, so we decided to let her go.”

Asked if he was tempted to breed the filly, Waters said, “I just race them.” He added with a laugh, “That is a bad enough addiction as it is.”

Princessof the Nyl is out of Arabisini (Bernardini), a daughter of stakes winner Arabis (Deputy Minister) and from the family of Atelier, Althea and Aldiza.

Fred Seitz signed the ticket on Princessof the Nyl on behalf of a partnership and he said it remained to be seen if the racing/broodmare prospect would race again.

“We're actually not sure if she'll race again, but it's more likely she won't,” Seitz said. “But, it's not positive yet.”

Of the filly's appeal, Seitz said, “Number one, she has probably one of the best pedigrees you can buy, in my opinion. And number two, she's just a really pretty mare. Everybody wants a really good-looking horse and I'm just like everybody else in that. To me, she was really pretty.”