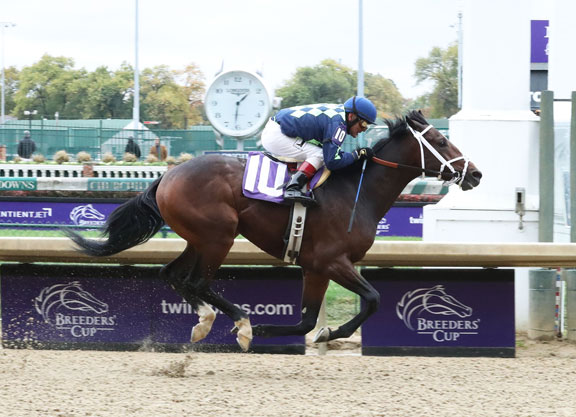 Perhaps under the radar in the hustle and bustle of Breeders’ Cup Friday was the maiden-breaking score by the 2-year-old Jack Van Berg (To Honor and Serve) in the second race on championship weekend. The colt is owned by Mike Waters’ Muddy Waters Stables and is trained by Tom Van Berg, son of the late Hall of Fame trainer for whom the horse is named.

“It was surreal,” Waters said of the victory. “I’ve been going to the races for 40 years, but I never experienced anything like that. It was inexplicable. There were people crying, but I was laughing. I was just overcome with joy.”

A lifelong racing fan, Waters has been a racehorse owner for just about five years now. He is in the commercial flooring business and is based in Seattle, where he hooked up with trainer Mike Puhich. It was Puhich who introduced Waters to Jack Van Berg.

“Alysheba was my favorite horse,” Waters recalled. “I was at Oaklawn and Mike Puhich told me he wanted to introduce me to someone, but I didn’t know who. He asked me who my favorite horse was and I said, ‘Alysheba.’ Jack winked at me and said, ‘Come on in.'”

Waters added with a laugh, “It was all down hill from there. We claimed a horse together the very next day. I got to be very close with Jack. He always said we would win the Kentucky Derby together.”

Waters and bloodstock agent Christina Jelm were shopping at last year’s Keeneland September Yearling Sale where they purchased a colt by To Honor and Serve for $28,000.

“I was at Keeneland and Jack was there buying horses for other clients,” Waters said. “I told him I wanted to name a horse after him. We bought this horse and I showed him to Jack and asked, ‘What about this one?’ and he said, ‘He looks like a winner to me.’ So three weeks later, I was at Keeneland and got him to sign the papers and sent them into The Jockeys Club. It was all approved of by Jack.”

Van Berg passed away two months later. His equine namesake made his first two racetrack appearances in stakes company at Emerald Downs for Puhich, including a runner-up effort in the W.T.B.O.A Lads S.

“The plan was always to send him to Tom, but these stakes popped up at Emerald Downs and we decided to take a chance,” Waters said. “But it didn’t seem right not to have the horse with a member of the family.”

The 2-year-old colt joined the Churchill-based barn of Tom Van Berg in October and made his first start for the outfit last Friday. Let go at 14-1, the bay went wire-to-wire and scored by two lengths (video).

“It couldn’t have worked out more perfectly, to have him win on the undercard of the Breeders’ Cup at Churchill Downs and to do it so easily.” Waters said. “It was perfect.”

The victory was part of a two-win day for Tom Van Berg, who came back to win the next race on the card with Casino Star (Flatter).

With the maiden victory, Jack Van Berg may have earned himself a start in Churchill’s Stars of Tomorrow II card Nov. 24, but Waters said no definite decisions have been made.

“We’ll let the horse tell us when he’s ready,” Waters, sounding like the late trainer he so admires, said.