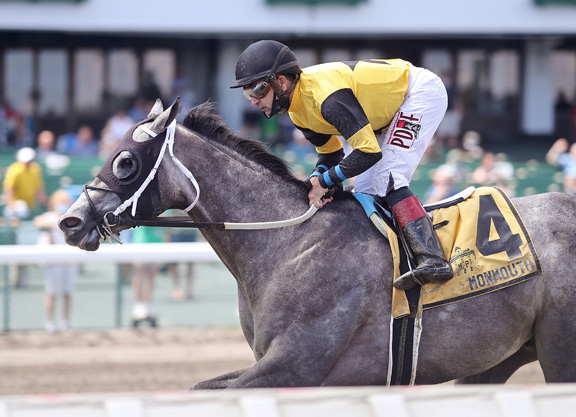 County Final topped last month’s Fasig-Tipton July Horses of Racing Age sale at $475,0000 last month, and began chipping away at that investment first time for the new connections here. A four-length debut winner turf sprinting for trainer John Ennis at Churchill June 5, the grey was second in the GIII Bashford Manor S. on the Louisville dirt 22 days later behind soon-to-be stablemate Cazadero (Street Sense). While Cazadero could only manage fifth in Friday’s GII Saratoga Special S., fellow Steve Asmussen pupil Jackie’s Warrior (Maclean’s Music) impressed in that event. With G2 Norfolk S. runner-up Golden Pal (Uncle Mo) and well-regarded Fauci (Malibu Moon) scratched when the race came off the grass, County Final’s main challenge appeared likely to come from those two’s stablemate Spicy Marg, an unraced Wesley Ward-trained filly. Spicy Marg blasted out of the gate, and quickly cleared as County Final was ridden along to keep up. The favorite came under the whip around the bend as the frontrunner floated him wide at the top of the stretch, but County Final was undeterred and leveled off nicely in the lane to cruise by his tiring foe in hand. The winner’s dam was a stakes winner going both long and short on the dirt while trained by Asmussen. She produced a Keen Ice filly in 2019 and a Will Take Charge colt this term before being bred back to Ransom the Moon.