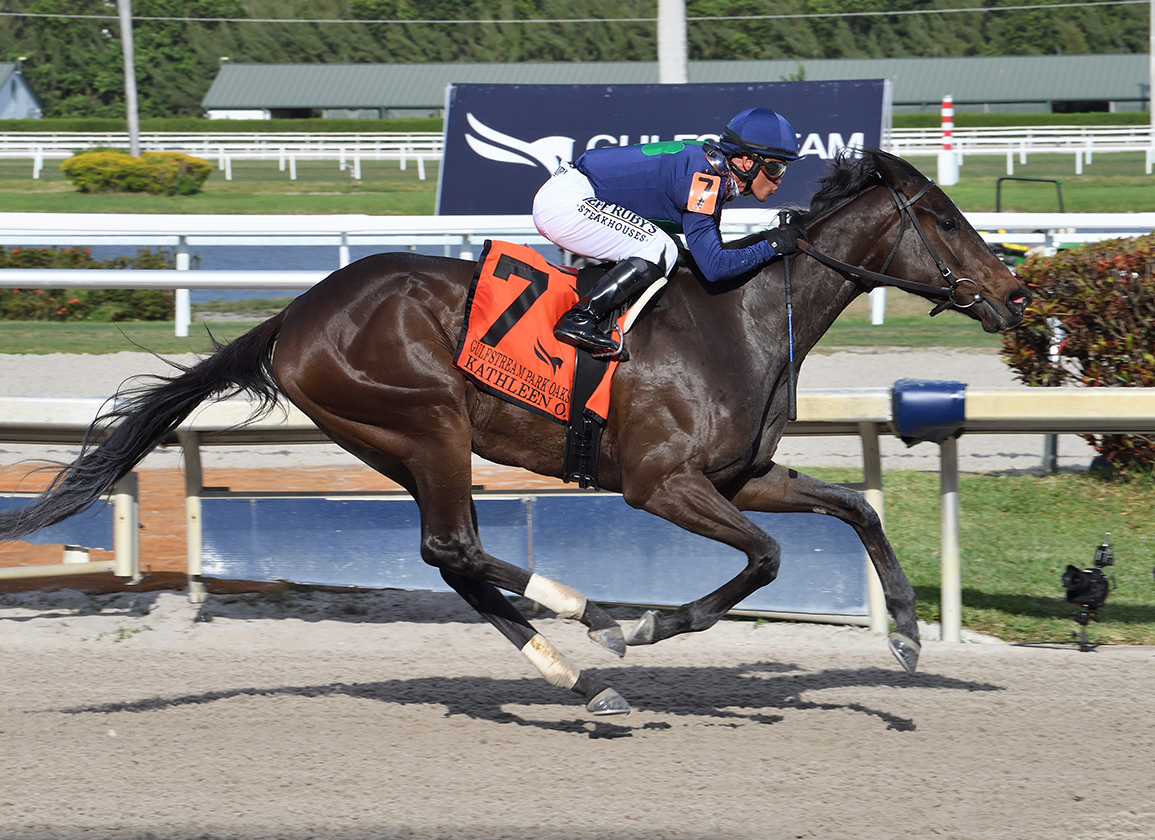 HALLANDALE BEACH, FL–Undefeated Kathleen O. (Upstart) put on a show yet again for an appreciative crowd at Gulfstream Saturday, rallying to another good-looking score in the GII Gulfstream Park Oaks. Earning 100 points for the victory, the Winngate Stables colorbearer moves to the top of the GI Kentucky Oaks leaderboard.

Away well from the outside post in this seven-horse affair, the 1-2 chalk sat patiently at the back of pack, racing off the fence just behind second-choice Goddess of Fire (Mineshaft) as 25-1 shot Cancel This (Malibu Moon) clocked an opening quarter in :24.17. Goddess of Fire inched up a bit in the five path with Kathleen O. mirroring that move to her outside as the half was clocked in :48.27. Goddess of Fire picked it up a notch on the backstretch, surging to the lead with Kathleen O. hot on her heels and full of run as three-quarters went in 1:12.50. Goddess of Fire entered the far turn in front, but Kathleen O. was right beside her at the top of the lane and shrugged her off with ease, coasting clear to an 2 3/4-length victory. Goddess of Fire held second with Running Legacy (Gun Runner) third.

“We got an outside post going around the first turn the first time and she kind of drifted out a bit,” trainer Shug McGaughey said. “I think she wants to run a distance of ground. She

just does everything right. She laid in there and Javier [Castellano] you can see when he kind of let her run up to him, she does it pretty easy. He said from there he just kind of let her cruise.”

The Hall of Famer continued, “We'll see how she comes out of it. Obviously the Kentucky Oaks is a big spot for me. I really like the Oaks. I've won it one time. I remember the thrill and I'd like to have it again. The long stretch at Churchill Downs, maybe it will be for her.”

“This is just awesome,” said new owner Patrick Kearny of Winngate Stables. “A year ago I didn't own a horse. I told Shug, we'd known each other for a long time, 'I'd like to do something different and get some excitement in my life. Do you mind if I get a horse?' He said, 'You don't get one horse, you get two.” So long story short, in Ocala last year he picked out Kathleen O. Then there was another horse we picked out called Cloudy. This is just incredible. I know I'm living a dream. It's just wonderful.”

“I had a beautiful trip,” Castellano said. “I had no question at all that she would handle two turns. She has strong power at the finish. I like the way she did it today, nice and easy with a strong finish. She has a lot of potential. I think she's going to be fun in the future.”

An $8,000 KEENOV weanling turned $50,000 FTKOCT yearling, Kathleen O. summoned $275,000 from McGaughey, who does not typically shop juvenile sales, at last year's OBS April sale after breezing in :21 1/5. Patiently handled by that Hall of Famer, she made her career bow going seven furlongs in the mud at Aqueduct Nov. 12, where he made a strong late run to get up by a head. Stepped up to stakes company next out here at Gulfstream, the dark bay unleashed a powerful turn of foot in the lane, inhaling the field and storming clear to win the one-mile Cash Run S. by 8 1/2 lengths. Biding her time at the back again in the track-and-trip GII Davona Dale Mar. 5, Kathleen O. charged past her foes once again, rolling home to a two-length score over GII Gazelle S.-bound Classy Edition (Classic Empire).

Kathleen O. is one of six black-type winners and two graded scorers for her young sire Upstart. She is also one of six black-type victors and three graded winners out of a daughter of Blame. The winner hails from the family of GISW sire Cupid (Tapit) and MGSW Heart Ashley (Lion Heart). She is the first foal out of Quaver, who has since produced the juvenile colt Tap Collector (Tapwrit), who brought $65,000 at the OBS Yearling Sale, and had Tapwrit fillies in 2021 and 2022.