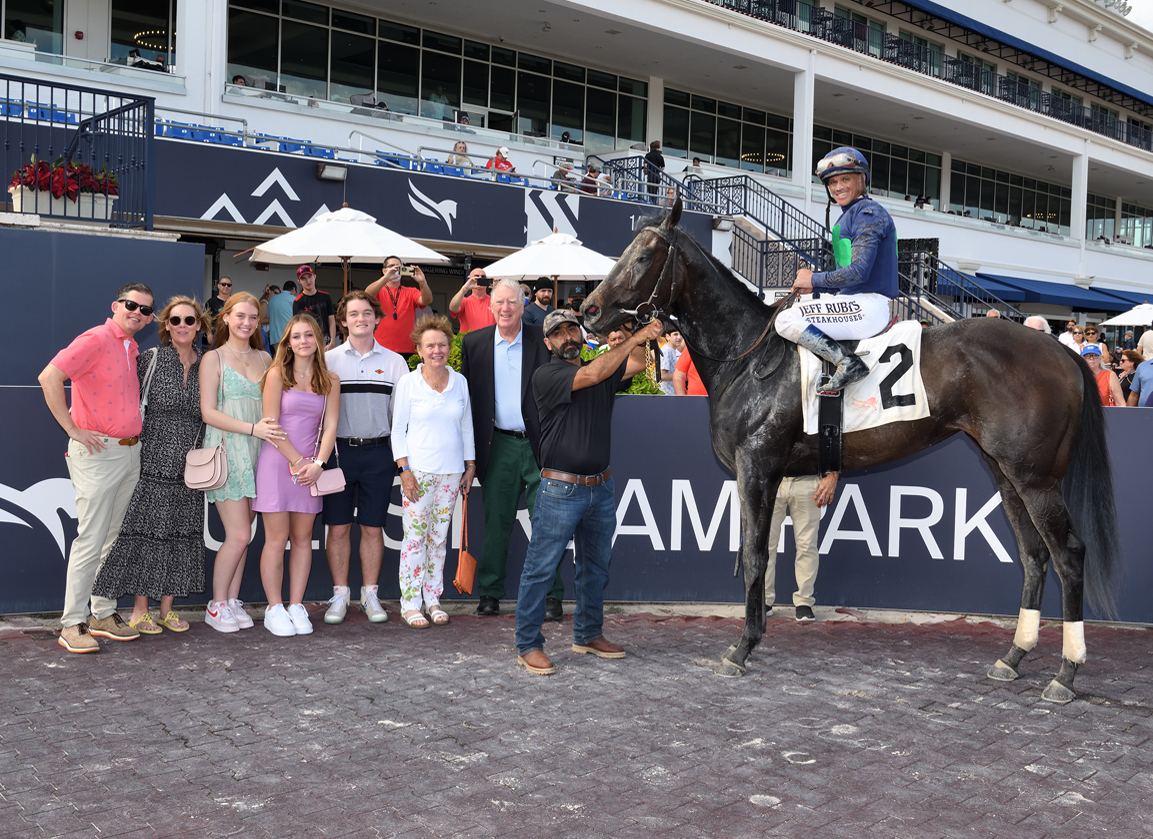 The sport is not supposed to be that easy, even if some people make it look that way sometimes.

Pat Kearney is 83, admits he doesn't know much about racing, has a fairly modest budget and had never owned a horse when he showed up last year at the OBS April 2-year-old sale. Fast forward some eight months later and Kearney is the owner of Kathleen O. (Upstart), one of the more promising 3-year-old fillies in racing right now. Making her second career start Saturday at Gulfstream, Kathleen O. won the Cash Run S. by 8 1/2 lengths in an impressive effort despite hesitating at the start. The victory came after she broke her maiden in her debut in November at Aqueduct.

“It has been an amazing, exciting, energizing experience,” said Kearney, who races under the name of Winngate Stables.

Prior to getting involved in ownership. Kearney was a casual racing fan who started going to the track at Arlington Park with his father as a child.

“I'm not a good handicapper,” he said. “I don't know much about breeding or pedigrees. What I did was take my $50, spend a day at the track and make some bets. It's good entertainment. I always really liked the horses.”

Kearney, who is retired after working in the securities industry in Chicago and as a lawyer, and Hall of Fame trainer Shug McGaughey have known each other for about 20 years and often play golf together. Somewhat out of the blue, Kearney one day asked McGaughey what he thought about his buying some horses.

“I talked to Shug and I asked him if he would work with me and buy some horses,” Kearney said. “I asked him what to do and he said I should buy two horses, a filly and a colt, get them at auction and buy them at a 2-year-old sale. He explained the costs and explained that you don't get into this sport to make money but for the satisfaction and the fun of the game.

“I wanted to find something I was interested in that I could do and didn't have to make a huge commitment. Not so much financially, but more so time and effort. I didn't want to have a lot of obligations.”

Having gotten off to a successful start in the game, Kearney only wishes he started earlier.

“I don't know why I didn't do it earlier,” he said. “About a year ago I just decided I wanted to get involved in something new. Do I wish I did it 10 years earlier? Absolutely. It had just never come up. The one question I had was whether I was too old to get started in the business. Fortunately, I am in good health.”

Kearney bought Kathleen O. for $275,000. He named the filly after his wife, whose maiden name is Kathleen O'Boyle. His other purchase, Cloudy (Noble Mission {GB)}, was bought three days later at the same sale for $130,000. He is winless in two starts.

“I enjoy going to the sales,” McGaughey said. “I worked the yearling sales pretty good last fall and we bought some nice yearlings. We also looked at some 2-year-olds last winter. It's been fun and interesting.”

It was apparent early on that McGaughey had picked out a filly with talent. Sent off at 3-1 in her first start in her debut, Kathleen O. was next to last and 6 1/2 lengths behind with a furlong remaining, but still found a way to get up in time to win by a head.

“I think we've got a lot to look forward to,” McGaughey said after the Cash Run. “I'm very pleased with the way she's come along and the way she ran today, and her maturity level. I was just saying to [my wife] Alison, think of what she's going to look like in a year from now. She's always been tall and she's still filling out.”

He may still be learning about the sport, but Kearney knows enough to know that the GI Kentucky Oaks could be part of the filly's future.

“I know that she's a very talented horse and I know there is a race called the Kentucky Oaks, but I have no idea if she will qualify for that or not,” Kearney said. “So far, it's been like hitting the lottery. I'm flabbergasted.”