Omaha Beach, Spun to Run Out as Pegasus Field Decimated 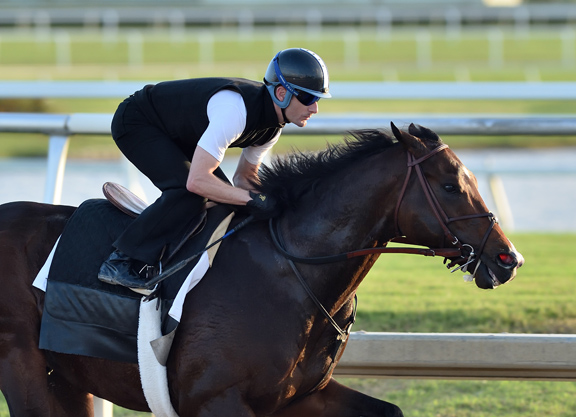 In what may be an unprecedented example of bad luck for a major race, Saturdays's GI Pegasus Invitational lost not just its marquee star, but also its second choice Thursday. The day kicked off with the news that GI Breeders' Cup Dirt Mile winner Spun to Run (Hard Spun) would be scratched due to a skin issue. About five hours later, it was learned that morning-line favorite Omaha Beach (War Front) would also be a late scratch as trainer Richard Mandella discovered his colt had an issue with his right hind ankle.

The defections of both horses were first reported by the Daily Racing Form's Jay Privman.

After Omaha Beach had a routine gallop Thursday morning, trainer Richard Mandella noticed a possible problem and had X-rays taken and sent to Dr. Larry Bramlage. Bramlage told Omaha Beach's connections that the X-rays revealed the possibility that the problem could be the beginnings of a fractured cannon bone.

“It was observed this morning that Omaha Beach had light swelling in his right hind fetlock,” Mandella told Gulfstream's publicity department. “While we are disappointed to have to miss the Pegasus World Cup Invitational, Omaha Beach's safety and well-being comes first and we wanted to do what was best for him. He has been a great pleasure to have around the barn and we are grateful for the opportunity to train such a magnificent horse.”

“From what Dr. Bramlage told us, there was no way we could take a chance with this horse,” owner Rick Porter said. “It's a good thing that he didn't get to run because if he had it might have been a disaster. That would have been a last-straw type of thing.”

Mandella had a similar outlook on the situation.

“The way you have to look at this is that if we ran him and he got hurt we would have really looked bad,” he said.

Omaha Beach will soon be on his way to Spendthrift Farm to begin his career as a stallion. It was a career that will be remembered more for what could have been than what was. After winning the GI Arkansas Derby, Omaha Beach was installed as the morning-line favorite for the GI Kentucky Derby. But he had to miss that race when coming down with an entrapped epiglottis.

At the time, Mandella believed his horse would be sidelined for just a brief period. He had a virus and another setback in his training, which cost him his chance to run not only in the Triple Crown races but in all the major 3-year-old races during the summer. Mandella brought Omaha Beach back for the Oct. 5 GI Santa Anita Sprint Championship, which the colt won after running down the top 3-year-old sprinter Shancelot (Shanghai Bobby). Because his horse had been off nearly six months, Mandella didn't think he was ready for a mile-and-a-quarter and entered him not in the GI Breeders' Cup Classic, but in the Dirt Mile. He had to settle for second in that race, losing to Spun to Run.

The Pegasus was expected to be Omaha Beach's chance to bask in the glory of a victory in a marquee race before going off to stud. Instead, his career ended with a win in the seven-furlong GI Malibu S.

“It's so unfortunate that he didn't get one last chance,” Mandella said. “But you couldn't do much more in a career than he did. He won sprinting. He won at a mile-and-an-eighth and did so at the very highest level. We probably didn't see his best. He had grown and developed so much since the spring. He just galloped in the Malibu. I know that he was really good. But just how good? He never really got a chance to prove that.”

“It's just a bummer,” Porter said. “While I look at it that the glass is half full, we will never know just how good he was.”

Omaha Beach retires with a record of 5-4-1 from 10 starts. He won three Grade I races and four stakes overall. He is a half-brother to 2014 Breeders' Cup winner and champion 2-year-old filly Take Charge Brandi (Giant's Causeway). His second dam is three-time GI-winning millionaire Take Charge Lady (Dehere), who was named Broodmare of the Year in 2013 after her son Will Take Charge (Unbridled's Song) was the Eclipse Award-winning 3-year-old colt that same year. She's also the dam of GI Florida Derby winner and sire Take Charge Indy (A.P. Indy).

Trainer Juan Carlos Guerrero said that Spun to Run had been dealing with skin issues for “three or four weeks” and was breaking out in hives. He originally thought they wouldn't be an impediment to his horse running in the Pegasus.

“We were training him with the skin issues and he was training really good,” Guerrero said. “He worked really good the other day. It didn't seem to bother him.”

Guerrero said that once the skin problems showed up on Spun to Run's legs he knew the only option was to withdraw from the race.

“It would kind of go away and then the next day it would pop back up somewhere else,” he said. “The last one was on his legs. The body I could have handled, but not the legs. The legs are for running so I couldn't do it, I couldn't run him. I didn't want to be in any position where he could get hurt. He's too valuable for me to do that. The last thing you want is for him to try to get off one leg and put too much weight on the other. That's how a horse can get hurt. I decided to take him out and live for another day. That's what's best for him.”

Guerrero was clearly upset about the development, saying that it nearly brought him to tears.

“I want to cry,” he said “It's horrible. Gulfstream has been so good to me. I feel bad for them. I feel bad for Javier (Castellano), who took off another horse (Tenfold) to ride him. That's what hurts the most. Gulfstream gave me everything I wanted, they were more than great to me. The race was between our horse and Omaha Beach. Now it's a whole different race. We just have to move on. Every time I talk about it, I feel like crying, but that's not going to change anything.”

So far as a new target for Spun to Run, Guerrero said he might have his horse ready for a trip to Dubai in March.

“I will go over it with the owner and see what he wants to do. Right now, I don't know. He has lost all his hair and doesn't look like himself. I want to get his hair back normal, make him happy and go from there. The good news is the horse is fine and his skin will clear up. It would have been a lot worse if I ran him and he wound up getting hurt. Then I would really be devastated. He's happy, eating fine and the vet has already started treating him for the skin problem. We should be good.”

The Pegasus does not have an also-eligible list, meaning just 10 horses will start. The race still has a $3-million purse and Gulfstream can expect a large and enthusiastic crowd, but the quality of the field is nowhere near what it should be for a $3 million race. Mucho Gusto (Mucho Macho Man) will be the morning-line favorite despite the fact he is coming off a fourth-place finish in the GIII Oklahoma Derby and his biggest wins have all come at the Grade III level. Higher Power (Medaglia d'Oro) and Seeking the Soul (Perfect Soul {Ire}) are the only Grade I winners in the field.  Seeking the Soul won the GI Clark H. in 2017 and Higher Power won the GI TVG Pacific Classic last summer at Del Mar.

Omaha Beach's defection will also affect his stud fee at Spendthrift. His stud fee was first announced at $40,000, but Spendthrift had a contingency written into the contacts whereby the fee would increase by $5,000 with wins in either to Malibu or the Pegasus. It is now set at $45,000.

Asked if whether or not this would affect the start of the breeding season, Spendthrift's General Manager Ned Toffey said, “He will go to Spendthrift on Monday and we will assess him. I won't see him until tomorrow morning, but just in preliminary conversations with Richard Mandella, we don't know, but I'm cautiously optimistic that this isn't a problem for the start of breeding season. If we had more time, they could do an MRI and potentially say this isn't what we think it is. It's essentially a precursor to a fracture. All there was according to Richard was a very small amount of filling and he was a little tender to flexion, but had been totally sound in the workout this morning. But these are things you just don't take chances with.”