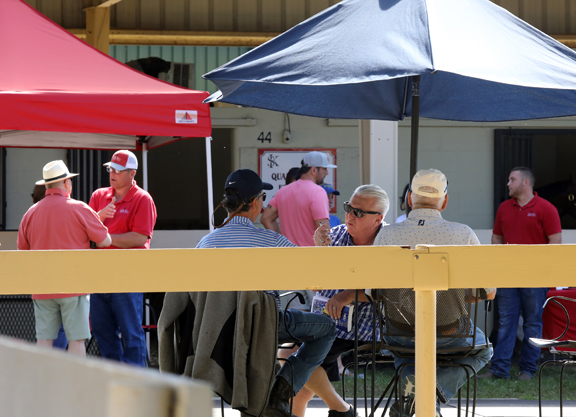 The Ocala Breeders' Sales Company will hold its two-day March 2-Year-Olds in Training Sale Tuesday and Wednesday amid unprecedented circumstances as the nation and world grapple with the COVID-19 pandemic that has caused most major events to be canceled or postponed and racing conducted without spectators, if at all. Add to that a plummeting stock market–circuit breakers were again triggered as trade opened Monday despite the Federal Reserve announcing Sunday evening that it would slash interest rates to 0% and launch a $700-billion quantitative easing program–and a doping scandal that rocked the racing world last Monday but now almost seems in the distant past, and it's obviously difficult to know what level of trade to expect this week in Florida.

In addition to breezes, pedigrees and conformation, buyers and sellers must now also attempt to handicap the future in ways they're not accustomed to.

Will there be races for these horses to run in in the late spring and summer? Some tracks have started to cease operations for at least the next couple weeks, with the Centers for Disease Control and Prevention issuing new guidelines that recommend canceling events with more than 50 people for the next two months. Races like the GI Kentucky Derby appear very much in doubt of being run in their typical calendar spots as of this writing.

With the horses and consignors already on the grounds and with many buyers having already made the trip to Ocala for under-tack shows that began last Thursday–right around when the realities of the Coronavirus outbreak became apparent–OBS shareholders made the tough decision to soldier on and conduct the sale. OBS has increased its phone bid capacity, posted ThoroStride virtual inspection videos for many hips, and increased cleaning protocols in order to facilitate as much trade as possible and do its best to mitigate the risks of a large gathering of people from around the world.

“For the most part, the horsemen that we spoke to have felt strongly about moving forward with the sale,” OBS Director of Sales Tod Wojciechowski said. “We've gotten a lot of overwhelming support in that regard. As far as what the sale is going to be like and getting a read on it, I will say that we've had plenty of people looking at horses.”

He continued, “Everybody, I think, understands it's tenuous circumstances, but we're all going to get through it.”

Hip 129, a The Factor colt from GOP Racing Stable Corp. Click for breeze.

Hip 347, an Anchor Down colt from Pike Racing, Agent I. Click for breeze.

Hip 477, a Will Take Charge colt from Golden Rock Thoroughbreds. Click for breeze.

The unbeaten Structor (Palace Malice), an $850,000 OBS March '19 (:21 1/5) purchase by Mike Ryan on behalf of owners Jeff Drown and Don Rachel from the Pick View LLC, Agent II, consignment at this sale last year, put an exclamation point on a perfect three-for-three season with a dramatic win in the GI Breeders' Cup Juvenile Turf at Santa Anita.

The 2019 March Sale has also produced Reddam Racing LLC's last-out G3 UAE Two Thousand Guineas winner Fore Left (Twirling Candy), who RNA'd for $145,000 from the Wavertree Stables, Inc. (Ciaran Dunne), Agent II, consignment following a :10 flat breeze; and Koichi Nishikawa's unbeaten Cafe Pharoah (American Pharoah), who rose to the top of the Japan Road to the GI Kentucky Derby standings with an impressive come-from-behind victory in the Hyacinth S. at Tokyo Racecourse. The latter brought $475,000 from Narvick International, agent, after breezing a quarter in :21 1/5 from the consignment of Eddie Woods, Agent XXI.

After registering an OBS March record of $2 million at last year's sale, Chestertown (Tapit) is entered to make his stakes debut in Saturday's $1-million GII TwinSpires.com Louisiana Derby at Fair Grounds. The gray, consigned by Sequel Bloodstock on behalf of breeders Chester and Mary Broman after breezing an eighth in :10 1/5, is campaigned in partnership by a group headed by West Point Thoroughbreds.

“I know the consignors put their heart and soul into this,” West Point's Terry Finley said Monday morning. “Whether this sale still happens or not, and with the next couple of 2-year-old sales already canceled, we are with you all, and we're going to support you in a huge way to move these horses. Don't think that we're going to forget about you, because we're not.”

“As crazy as it sounds, we were up [Sunday] in terms of the shows we had from last year as a group. And our most popular horse, we've shown more times than our most popular one last year. There are plenty of people here. Everybody has that deer in the headlights look like, 'what's happening.' I think if nobody panics, we'll all be ok.

“For the last 10 years, we've sold 30% of what we've cataloged. What did they catalog here? 681. They are down to 534 before final scratches. If they sell half of them, it will be business as usual. For the last few years, we've been lucky in terms of the top end, which has covered the mistakes at the bottom. We're going to need the top end to be strong to maintain that. I don't think anybody has a clue where the market is going to be. But they are shopping them, they are doing the things they are supposed to be doing. It's a less than ideal situation–you could run out of reasons for why it's less than ideal. But at the end of the day, it's life. You've got to carry on and make the best of it. It'll be what it will be and hopefully we live to fight another day.” –Consignor Ciaran Dunne, Wavertree Stables

“I would think at this point it would take government intervention [to cancel]–if somebody in the Florida state government or county government says, 'no large gatherings'–that's the only thing that might curtail it. And I think that makes sense. OBS should go on with the sale. Yes, we have a significant problem, but it's not like there have been five guys taken off the grounds coughing or with temperatures, either. In Florida, there are 150 cases to date. It makes sense to go on with the sale.

“Basically, all of the major players are here. There are some nice horses and that top 20% always does well at any sale that you hang up there in the world. The question is, the middle range has been suspect the last couple of years, and is the current economic crisis going to impact that? My feeling is that it has to.” –Bloodstock agent and pinhooker Pete Bradley

“Well, it's been a little subdued, honestly. With the things going on around with the Coronavirus and the stock market, it's been a little tough to find some optimism, but when you have good horses I think people tend to gravitate to them. Hopefully we can pull this off.” –Consignor Paul Sharp

“It's like controlled panic. I've made the analogy that I feel lik we're on–there was a movie years ago with Jim Carrey called The Truman Show, where Jim Carrey did not realize that he was actually the subject of a TV series. That's the way I feel. We're going through the motions, but we don't really know if this is real or not.

“There are definitely less buyers. I mean, we're happy for the ones that we have. For me, personally, because we don't know when these horses would be able to sell out a later date, it's kind of like ripe bananas. It's very, very difficult to bring a horse to the peak of their ability and performance, and then say, 'Okay, just sit quietly,' for an unknown length of time. It's certainly unprecedented. It's not like a natural disaster where we had a hurricane, or a fire, and something was rescheduled.

We don't know when we can reschedule this.” —Consignor Becky Thomas, Sequel Bloodstock

“Obviously, from a market perspective, there's a lot of unpredictability here. We're cautiously optimistic that there will be viable marketplace and a potentially fair one from a buying standpoint. Judging by the buyers who are here, there should still be money and demand for the higher-priced horses. But there's a broad range of horses in this catalog and there should be buying opportunities throughout.” –Bloodstock agent Nick Hines

“OBS is great. They're really supportive of all of us local consignors here. They help us out, they do what they can. I think they do their best to put on a good presentation of horses and I think they do a really good job of separating it for what the sale is… March used to be a select sale based strictly on pedigree. I think they've done a really good job with making it a showcase of physicals and showing that a horse can maybe not have the $300,000 pedigree, but it can have the physical conformity to be a graded stake horse.” –Consignor Michele Hemingway, Hemingway Racing & Training Stables LLC