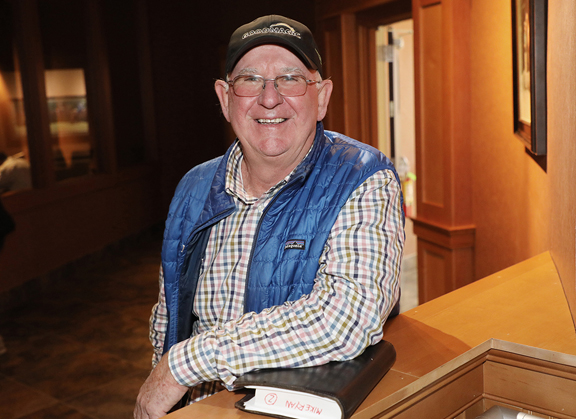 Structor (Palace Malice)–an $850,000 OBS March (:21 1/5) purchase by Ryan from the Pick View LLC, Agent II, consignment at this sale last year–capped a perfect three-for-three season for owners Jeff Drown and Don Rachel and trainer Chad Brown with a dramatic win in the GI Breeders' Cup Juvenile Turf at Santa Anita. Fellow OBS March graduate and millionaire A Thread of Blue (Hard Spun) was also selected by Ryan on behalf of owner Leonard C. Green for $430,000 at this sale in 2018.

Q: The picture of Structor in the winner's circle following the Breeders' Cup Juvenile Turf on the cover of this year's OBS March Sale catalogue seems like a good place to start. I know you're well-connected to him on both sides of his pedigree (Structor a Ryan Horse Top and Bottom), but can you reflect a little bit on his breeze and what you liked about him as an individual?

MR: He's magnificent–a big, beautiful, powerful, imposing horse. He's a blend of (grandsire) Curlin and (damsire) More Than Ready. He's got the size and frame of Palace Malice, but he's a little darker and has the More Than Ready coming through with the color. His breeze was spectacular–when I saw him at the barn the day after he breezed I said, 'Oh my god. This horse is going to be very expensive.' He was a good-looking, powerful horse and looked like a horse that shouldn't show the speed that he did because he's certainly two turns.

I was talking to Chad one morning just before Saratoga in early July last year and he said, 'Structor looked like my Derby horse coming down the lane this morning.' He always trained very well on the dirt, but Chad felt that grass was the best way to go because sprinting on dirt at Saratoga, two-turn horses get run off their feet.

It was a good call–he won first out and was very impressive. He had to really belly down in the (GIII) Pilgrim and he showed a lot of heart and effort that day because he wasn't challenged first time out winning with the handbrake on. He improved tremendously from the Pilgrim to the Breeders' Cup. It was a loaded field as it always is. He showed an incredible turn of foot. It was a tremendous performance.

Q: Take us through your process while shopping the 2-year-old sales. What is your approach and how does the synthetic Safetrack surface at OBS influence your evaluation process?

MR: My approach begins with my assistant Anna Thompson in Lexington-she does a terrific job. She transcribes all my yearling notes. Not that I see every one of them, but I'll see a large percentage of what would have come out of Fasig-Tipton Saratoga, Keeneland Books 1-4, and also yearlings out on the farm, and that's been a great asset to me over the years to see how they have changed or developed since I last saw them. So I start there.

The breeze on the synthetic-you know, a lot of horses breeze very well on that surface because it's easy for them. It doesn't really separate them much. A lot of horses will breeze fast because they can fly over the top of it. It's like running on firm turf–it's very fast. They fly around there.

I watch every breeze live, then the ones we like, we'll watch the videos. We'll go look at them next back at the barn. I look at them just as I'm looking at yearlings. You're looking at their conformation, shape, make, fitness level, soundness level, etc. It's an attrition process.

Q: You also play the role of seller each year at the 2-year-old sales. What are you looking for at the yearling sales for your pinhooking prospects?

MR: The OBS April Sale is almost like our Keeneland September Sale of the 2-year-old market now. You'll see a lot of horses in the March Sale with average pedigrees, weak on the bottom side or by light sires, but a good horse can come from anywhere, I'm well aware of that. They expanded it and I like that. Some people want to go in there and look for that fast, early horse who doesn't have a lot of pedigree, but they want some 2-year-old action, and those horses that are mature and forward, they'll do very well in this sale. There will also be some Classic-type horses like Structor, too.

Q: Who are some of the freshman sires that you're high on from this class?

MR: I've seen several by Frosted and Nyquist that are very nice, and I'm not just harping Nyquist because we have a connection to him. Both of those jump out of my mind first. Niall has a Nyquist out of a Quality Road mare going to Gulfstream (Hip 166) that reminds us so much of his father. He's a big, powerful horse with speed. He's been very impressive and has shown us a lot. He's a Classic kind of horse.

I've seen a couple of Runhappys that are very nice–he was so dominant and he's very consistent; he really breeds a nice physical. Speightster–I've heard a bit of talk about them, they were nice yearlings and I liked them, too. I also liked the Exaggerators. After the yearling sales were finished, I had a very positive feeling about him.

Outwork is another one. I've seen several by him that I like. I bought two of them at the yearling sales–one is going to the sales and the other is going to the races. He was a horse that impressed me without giving him a whole lot of thought beforehand.

We'll get educated pretty quickly in the next couple of weeks.

Q: How do you see the 2-year-old market playing out this spring? Polarization always seems to be the takeaway these days.

MR: I think it will be the same old story. You have to breeze well and go fast, but you've got to look good doing it and gallop out nicely. There's so much emphasis put on the gallop out–it's a little crazy in my mind. Most horses are still breezing from the wire to the three-quarter pole. When horses are going out in :33 and change, :32 and change, :45 and change, etc. That's not a gallop out, that's a breeze.

You'll have to look the part back at the barn, and, of course, have a good vet report. And the ones that do, everybody lands on the same ones. It's either feast or famine.

The change of ownership rate from the catalogue after scratches and RNAs is about 50%, isn't it? People are thorough and they know what they want. They'll pay for quality–it's all about quality. There's no demand for a marginal horse anymore.

Q: The 2-year-old sales keep growing in popularity as its graduates continue to have an added presence in the Classic races each spring and you see so many more outfits at these sales that you didn't 10 years ago. What are your thoughts on this trend?

MR: I think it's changed significantly. Years back, 20 years ago or so, it used to be the horses that didn't get sold as yearlings and the horses that the pinhookers used to favor, those Quarter Horse, very fast looking, precocious individuals. But now the pinhookers–they're very good horsemen and a lot of them are very good judges–buy a nice horse. So, the quality coming to the 2-year-old sales is completely different than what it used to be.

I remember the April sale about 10-15 years ago, you didn't give it a whole lot of respect because the lower-end horses were going there–the horses that didn't make the cut for OBS March, Keeneland or Fasig Gulfstream, it used to be Calder back then–but that's not the case anymore. The pinhookers are a huge force in the yearling market and they buy nice horses. They put a lot of money up and they've got a big investment. Those guys know what they're doing and make a living out of it.

Q: Final question. You touched on the gallop outs earlier. Is that the biggest issue facing the 2-year-old sales right now or is there something else that sticks out to you?

MR: I think we're way too influenced by the watch. And it doesn't really make any sense because they're never going to be solo again in their lives going 200 or 400 meters. Most of them you know cannot sustain that :10 1/5 or :10 flat for four furlongs. We're not really thinking it through very smartly.

It's a one-shot deal. But a lot of them are very, very fit. A lot of them look like they've had a couple of races they're so fit. They're as fit as Bob Baffert or Todd Pletcher could get 'em. Any horse, in my mind, can run a fast 200 meters or a fast quarter, especially on a synthetic. But they're fit, well-programmed, have plenty of schooling at home, and they go over there and act very professional. But just because they breeze fast doesn't mean they are quality racehorses, either.