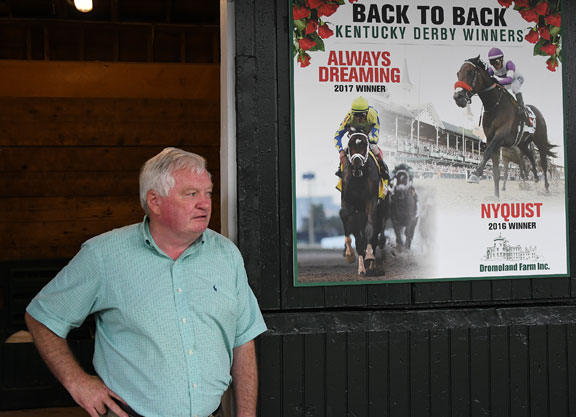 “We were best friends for over 40 years,” Ryan said. “It is quite sudden and a big shock to us all. He was a very, very kind man and did so much for so many people. He would give you the shirt off his back. Gerry took tremendous personal pride in bringing students from Ireland, who aspired to be successful in the horse business, to work on his farm. He has done that for over 30 years and still does to this day.”

Ryan continued, “In addition to his family and friends, his farm and his horses were his life. He was on the farm all day, every day. He was very hands on, foaling mares, prepping yearlings, he did it all. There is nothing he loved more, even on the worst of days, than to be out there feeding his horses. He didn't care what the elements were. If he was outside with his stock, he was a happy man. We will all miss him terribly. This is a huge loss.”

“He was one of the greatest ambassadors in the American horse business,” Costello said. “I don't know of anybody who ever had a bad word to say about Gerry. He was the ultimate horseman and a beautiful human being. He loved his family unbelievably. It is so tragic.”

A native of County Clare in Ireland, Dilger came to the United States in 1978 after graduation from the Irish National Stud course the previous year. He began working at a Lexington farm and eventually became a farm manager. He started a weanling-to-yearling pinhooking partnership with Mike Ryan and the success of that venture led to Dilger's purchase of Dromoland Farm in Kentucky.

Dilger and Ryan also has a breeding partnership known as Santa Rosa Partners. They purchased GSW Above Perfection (In Excess {Ire}) for $450,000 in foal to Dixie Union at the 2006 Fasig-Tipton November Sale. The resulting foal was Hot Dixie Chick, who captured the 2009 GI Spinaway S. The following day Dublin (Afleet Alex), who was bred by Dilger in partnership with Peter Blum, won the GI Hopeful S., providing Dilger with a rare double as a breeder.

Hot Dixie Chick was not Dilger and Ryan's only success with Above Perfection. In 2014 she produced a Bodemeister colt who was purchased by bloodstock agent Steve Young for $350,000 at Keeneland September. That colt was 2017 GI Florida Derby and GI Kentucky Derby hero Always Dreaming. Dilger and Ryan also bred and campaigned Above Perfection's 2016 foal, GII Demoiselle S. victress Positive Spirit (Pioneerof the Nile).

“We started in business together in 1980 and have been best friends and business partners ever since then,” Ryan said, reflecting on his longtime partnership with Dilger. “We started pinhooking foals and he loved breeding and the mares. We were very lucky to have a very good mare in Above Perfection. I saw her this morning and she is incredible for 22-years-old. She produced three stakes winners for us and Gerry and I still own her daughter Positive Spirit. She is going to run at Keeneland Apr. 10. Above Perfection has a yearling filly by Curlin and is due in about 30 days with a Quality Road filly.”

Always Dreaming is not the only Florida/Kentucky Derby winner Dilger had ties to. Along with partners Ted Campion and Pat Costello, he bought 2015 Kentucky Derby winner and champion juvenile Nyquist (Uncle Mo) for $180,000 as a weanling at Keeneland November in 2013 and raised him at Dromoland. They resold him for $230,000 at Keeneland September to a group that included Ryan. Finally, Nyquist was bought for $400,000 at the 2015 Fasig-Tipton Florida Select 2-Year-Olds in Training by Reddam Racing.

In a TDN story on Dilger after he won the Irish Thoroughbred Breeders' Association's annual Wild Geese Award, which is given to someone from Ireland who has excelled outside of their native country while “flying the Irish flag with pride on a global stage,” Ryan said, “Gerry is one of the best horsemen I have ever met. “His specialty is looking at young stock, which is not easy because they change so much. He's always upbeat, always thinking positive. Even when the horse business was going through challenging times, he was always cheerful and bright.  I think that's part of the reason for his success, that he has a positive attitude and he loves what he's doing.”

Many prominent members of the industry took to Twitter Wednesday morning, writing tributes to the beloved Dilger.

“Gerry Dilger was a hero to us all,” Tom Ryan tweeted. “That big, welcoming smile. He never refused a youngster an opportunity. When it came to his family and business, he stood seven-foot tall, oozing pride and conviction. That little man from Clare will forever be remembered as a giant. Sláinte Gerry.”

Canadian breeder and consignor Dave Anderson of Anderson Farms wrote, “I was stabled beside Gerry at Keeneland in my first sale after my dad died. He took me under his wing and helped me through it like a great coach. I will be forever grateful. He told me how much he loved my dad. I just wish I had a chance to say the same to him. Love you Gerry. RIP”

Florida horseman and consignor Colin Brennan said, “We lost a Grade I winner of a man. Gerry Dilger was a wonderful man, friend, horseman, and so much more. His cheery Irish personality and jokes will be deeply missed.”

Breeder John Gunther of Glenwood Farm tweeted, “I met Gerry Dilger when I first came to Kentucky 30 plus years ago. We often met at Goshen's for a beer and a few laughs. Very memorable times. Will miss his smiling face at the sales. RIP Gerry.”

Dilger is survived by his wife Erin and three children.

“We are deeply saddened at Gerry's passing,” a statement from Erin and family, and the Dromoland Farm Team, read. “He has touched many people's lives, and was an amazing father and husband. We are tremendously grateful for all that the doctors and staff did for Gerry this past week, at Baptist Health Hospital. We appreciate the overwhelming love and prayers we continue to receive from people around the world. At this time, Dromoland Farm will continue to operate according to Gerry's vision. Funeral arrangements to be made, and will be announced soon.”