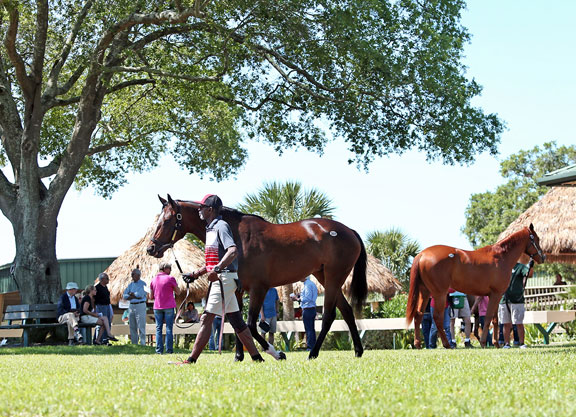 The Ocala Breeders' Sales Company's Spring Sale of 2-Year-Olds in Training kicks off a four-day run Tuesday with sessions beginning at 10:30 a.m. daily.

The sale comes on the back of a very strong OBS March Sale where 378 juveniles summoned $49.941 million, including four seven-figure sellers.

“The March Sale was very good,” said OBS Director of Sales Tod Wojciechowski. “There was a lot of activity at all levels in March and we anticipate that strength to carry over into April.”

There was a high level of activity on the OBS grounds leading up to the March Sale and consignors saw the same during the seven-day Spring Sale under-tack show last week.

“There was a good buzz in the air at the March sale, better than we've had in some time,” Coastal Equine's Jesse Hoppel said. “I feel the same type of environment coming here in April. I anticipate another strong horse sale.”

With 1231 juveniles in the catalogue, the Spring Sale is a major player on the calendar each year for both buyers and sellers.

“The April Sale is the largest 2-year-old sale in the world and probably the most productive,” Wojciechowski said. “If people are only going to be able to attend one 2-year-old sale, this is probably going to be the one they will attend. The consignors are always impressive. Each year they outdo themselves with the quality of horses they bring.”

“We ran one-two in the Saudi Cup, won the G1 Dubai World Cup,”Wojciechowski said. “There are horses that win all over the world that come out of the April sale.”