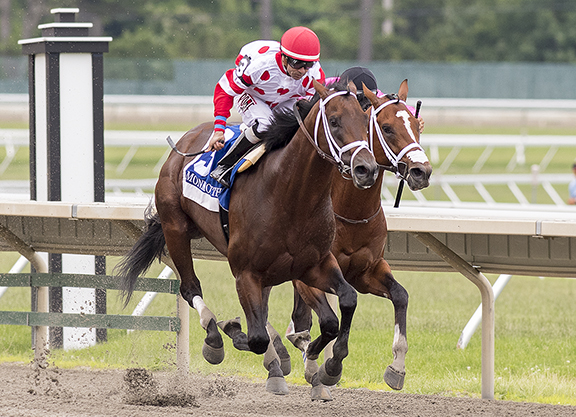 The New York State Thoroughbred Breeding and Development Fund's incentive and rewards program continues to drive new interest and investment in New York stallions, particularly those whose pedigrees fit the race conditions and surfaces of the New York Racing Association (NYRA). Sons of champions and horses that were popular and successful in New York are debuting at stud and coming with significant mare bookings generated in part by the buyers' market at the breeding stock sales during the past three months.

New to stud in 2021 and new to the roster at Irish Hill are King for a Day (Uncle Mo) and Lookin At Lee (Lookin At Lucky).

“King for a Day arrived in late December, and that was a big day for us and for breeders in New York,” said Irish Hill Century Farm stallion manager Bill Leak. “Being a son of Uncle Mo, who currently has three of the top four 2-year-old sires in the country, is definitely a big plus. He's going to provide a lot of good opportunities for New York breeders.”

King for a Day is owned by Red Oak Stable and was trained by Todd Pletcher. Earning $260,550 in seven starts, King for a Day had three wins, a second and a third. He beat Maximum Security (New Year's Day) in the Pegasus S. at Monmouth Park but ran into traffic in the GI Haskell S. four weeks later, finishing fifth. High-cruising speed is a term that has been used to describe the running style of King for a Day and that of his sire, Uncle Mo.

“Uncle Mos have done really well at getting out there early with early speed in dirt races and carrying it through the finish. I think that's something at which he's going to do well, bringing that into the program in New York.”

“King for a Day was bred and raced by Red Oak Stable,” said Leak. “They owned the mare, and she's produced three stakes winners for them. They've got a very deep family history of breeding horses in Florida, Kentucky and now in New York. They're very committed to this stallion, making sure that he gets the right horses to start off properly as a young stallion.”

In fact, Ubetwereven was featured by TDN in June, 2019 and coined 'the gift that keeps on giving.' Rick Sacco, Red Oak's racing and operations manager, told TDN, “I bought the mare privately for Mr. Brunetti about 15 years ago off of Irv Cowan in Kentucky. We were looking to upgrade and Mr. Cowan was looking to cut back and sell some mares. I just loved her physically and loved French Deputy. She is a mare with a lot of bone, good conformation and just looked the part.

Ubetwereven has produced seven winners from nine foals of racing age. Three of those winners have captured black-type events. She'll be bred back to Uncle Mo this year.

“King for a Day's conformation, I think, is very similar to Uncle Mo. He stands over a lot of ground. He's got a lot of leg, a little bit of a shorter back–something that we've been seeing lately, that has been proven to show that high-cruising speed ability,” said Leak.

“We've been fortunate and lucky enough to have had our hands on a few Uncle Mos,” said Sacco. “And King for a Day is definitely one of the big, good-looking ones.”

Leak reports that King for a Day has been very well received by New York breeders.

“They see an opportunity here for him to bring things to their mares that maybe they haven't seen before, or they have seen before and were able to capitalize on,” said Leak. “He's a total outcross through his first four lines. So, there are opportunities for breeders to breed all sorts of mares to him. Uncle Mo and his sons have been very successful with multiple different lines of breeding.”

Continued Sacco: “Red Oak will be supporting King for a Day with at least 12 mares as of today and that number could rise to 15. Some have been recently retired from the track, a couple are from our Kentucky division, some are recently purchased and we will be attending the upcoming February Fasig-Tipton Kentucky Sale.”

Sacco added, “Red Oak looks forward to participating in every facet of the lucrative New York-bred program. There is benefit in owning a stallion in New York and receiving stallion awards, breeders' awards and rich New York-bred restricted race and stakes programs offered to owners.” 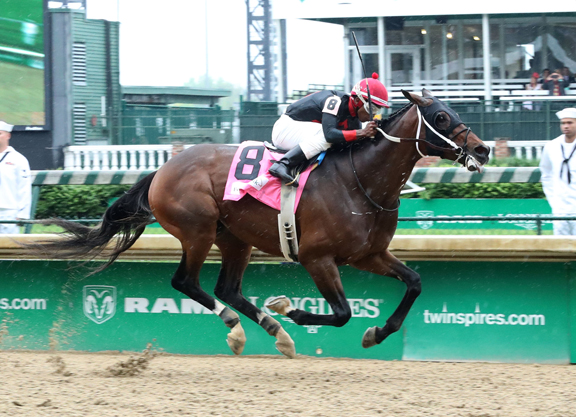 Lookin At Lee was second in the 2017 Kentucky Derby | Coady

Also new to Irish Hill and Dutchess Views is Lookin At Lee. The 2017 GI Kentucky Derby runner-up (from post one at odds of 33-1) to Always Dreaming (Bodemeister) earned $1,343,188 for L and N Racing, a four-way partnership composed of Lee, Andy and Michael Levinson, and Don Nelson. The winner of the Ellis Park Juvenile S. at two and the Downs At Albuquerque H. at age five–trained throughout his career by Hall of Famer Steve Asmussen–was fourth in the GI Breeders' Cup Juvenile at Santa Anita.

In the first leg of the Triple Crown, Lookin At Lee beat Classic Empire (Pioneerof the Nile), to whom he was runner up twice as a 2-year-old, as well as Battle of Midway (Smart Strike), Tapwrit (Tapit), Girvin (Tale of Ekati), Practical Joke (Into Mischief) and others in that talented field.

“It was so exciting and special,” said Lee Levinson. “Since Risen Star [Secretariat, in 1988], no horse that started in the Kentucky Derby from post position one before Lookin At Lee had finished in the top three.”

The Levinsons bought Lookin At Lee as a yearling for $70,000 at the first horse sale they ever attended.

“He was in Book 1 at Keeneland,” said Levinson. “We liked the way he looked and we liked that his family on both sides has proven winners. We would have paid more.”

As for what Lookin At Lee brings as a young sire, Levinson said his soundness and health while being consistently competitive at that level of racing throughout his career stands out most dramatically. His pedigree on both sides is a close second.

“After the Breeders' Cup Juvenile, he went on and competed in exclusively graded stakes for his 3-year-old campaign, racing in eight graded stakes over five months,” said Leak. “He's a very durable horse, and I think that's one thing he brings to the New York program–durability–as well as a high performance level.”

“The New York breeders' program is one of the better ones,” said Levinson. “And with a horse like him who stayed so healthy, ran in all three Triple Crown races and had no leg issues through these long campaigns, we thought he could really make a name for himself in New York.”

Lookin At Lee was bred in Kentucky by Ray Hanson and is out of a Langfuhr mare, Langara Lass. His sire, Classic-winning Lookin At Lucky, is also the sire of five-time Grade I winner Accelerate and Kentucky Derby winner Country House, who are both at stud.

“It took 23 years of Mr. Hanson breeding this family and refining it to get to this point where he got Lookin At Lee,” said Leak. “Not only did he get Lookin At Lee, but he also got his half-brother, Blended Citizen [Proud Citizen], who's a multiple Grade III stakes winner, and also his half-sister Battlefield Angel [Proud Citizen], who produced Manny Wah [Will Take Charge], who ran in the Breeders' Cup Sprint this year.”

“Lookin At Lee's conformation is very classic. Durability is what you see when you see him,” said Leak. “He stands up straight. He's got good feet, good bones. He's got a great shoulder, a nice back, and a good motor to go with it.”

At Irish Hill, breeders are showing interest in Lookin At Lee and the Levinsons have sent a number of mares to the farm.

As for the 7-year-old's adjustment to life on the farm, he appears calm and confident.

“Lookin At Lee is really easy to be around. He's got a great personality,” said Leak. “He's a very smart horse who is willing to be a participant in whatever it is you want him to do.”

Added Asmussen: “He's a lovely horse. He's a talented, sound horse that will be a good addition to the New York breeding program.”