Ubetwereven, The Gift That Keeps On Giving For Red Oak Stable 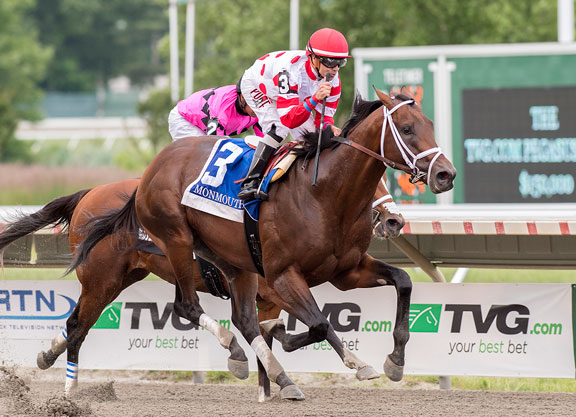 King For a Day | Sarah Andrew

The unraced mare Ubetwereven (French Deputy) has proven to be quite a shrewd investment for the Brunetti family's Red Oak Stable. Privately purchased almost 15 years ago, she has produced seven winners from eight foals of racing age. Three of those winners have captured black-type events, including her youngest foal in training, King For a Day (Uncle Mo), who bested Maximum Security (New Year's Day) in Sunday's Pegasus S. at Monmouth Park.

“I bought the mare privately for Mr. Brunetti about 15 years ago off of Irv Cowan in Kentucky,” said Rick Sacco, Red Oak's racing and operations manager. “We were looking to upgrade and Mr. Cowan was looking to cut back and sell some mares. I just loved her physically and loved French Deputy. She is a mare with a lot of bone, good conformation and just looked the part.”

King For a Day showed promise from the start, finishing third to a 'TDN Rising Star' performance from subsequent Grade I winner Complexity (Maclean's Music) in his sprint debut at Saratoga Sept. 3 and earning his diploma next out when stretched out to 1 1/16 miles at Belmont Oct. 4. Concluding his juvenile campaign with a fourth in the GII Kentucky Jockey Club S. at Churchill Downs Nov. 24, he returned from six months on the sidelines to annex Pimlico's Sir Barton S. May 18 (video).

“We ran him on Preakness day on the undercard in a non-winners of a sweepstakes race,” Sacco said. “We were coming off six months and it was just the perfect race for our colt. He ran super. Johnny [Velazquez] said there was a lot more in the tank. We really benefitted from that first race back.”

He continued, “We were scheduled to run in the [GIII] Indiana Derby [July 13]. We thought this horse was just doing so good and he really got a lot out of the Sir Barton S., so we called an audible and opted to come into the Pegasus S. Honestly, from what we were reading, we thought Maximum Security wasn't running. It was not like we wanted to hook this horse on top of his game, so fast, so good, so experienced right now. We were kind of thinking we needed another race before we went up against the elite 3-year-olds. It just so happened we came in right and ran a superior race.”

While Grade I winner Maximum Security, who was making his first start since being disqualified from first in the GI Kentucky Derby, stumbled at the break of the Pegasus, King For a Day was away in good order and kept the pressure on his more accomplished rival every step of the way. It was a two-horse race in the stretch and King For a Day determinedly pushed past the heavy favorite in the final strides to score (video).

“We are thrilled about the win,” said Sacco, who was in attendance at Monmouth Park Sunday. “The colt is an important horse to the whole operation. We own the mare. We own all the siblings. It is just a very, very satisfying win with a colt that we knew had a lot of potential as a 2-year-old, but had some minor setbacks and we waited patiently for him to return.”

As for what's next for their promising sophomore, Sacco said, “He came out of the race in very good shape. We kept him here at Monmouth Park for about three days to let him recover. We have a 72-hour rule and the idea of that is that we want the horse to let us know that he came out of the race in perfect order. We want to see that he ate up that night, that he is good two days later and three days later. Then we will go back to our game plan of what race is best for the horse. Logically, you have the [GI] Haskell [Invitational S. July 20], which is right [at Monmouth] and he just won over this track, and then the [GI] Travers [S. Aug. 24] or even the [GII] Jim Dandy [at Saratoga July 27]. We are going to weigh it.”

King For a Day is not the first success story the Brunetti family has had with Uncle Mo. The Ashford sire is also responsible for their Grade I-winning homebred mare Unbridled Mo, who, like King For a Day, was conditioner by Todd Pletcher.

“What's not to like about Uncle Mo? He was a precocious horse, really did it all and is gorgeous,” Sacco said. “Stephen Brunetti was astute enough to see how much value was in him at around $25,000. Breeding at that level, we got King For a Day and Unbridled Mo, who is a Grade I winner in foal to Quality Road. Stephen Brunetti has been a fan of Uncle Mo from day one.”

Prior to King For a Day, Ubetwereven produced a pair of stakes-winning fillies by Lightnin N Thunder in Ima Jersey Girl and Feel That Fire, who in turn produced another Grade I winner for Red Oak Stable in Mind Control (Stay Thirsty).

“Ubetwereven produced Feel That Fire, who was a stakes winner at Monmouth Park, and she produced Mind Control,” Sacco said. “We also have Mind Control's 2-year-old half-sister by Bodemeister, named My Gift From Above, who is at Monmouth Park right now. She is about three weeks away from running and really looks like she could be a nice 2-year-old filly.”

Runner-up to next-out GII Saratoga Special S. winner Call Paul (Friesan Fire) in his Delaware Park unveiling July 5, Mind Control graduated next out at his trainer Greg Sacco's Monmouth Park homebase Aug. 12 and followed suit with a 10-1 upset in Saratoga's GI Hopeful S. (video). Off the board in the GI Breeders' Cup Juvenile in November, the bay returned to winning ways in Aqueduct's Jerome S. on New Year's Day and was second in the GIII Gotham S. there Mar. 9. Capturing that venue's GIII Bay Shore S. Apr. 6, he was eighth after a troubled trip last time in Belmont's GI Woody Stephens S. June 8.

“Mind Control stumbled badly out of the gate and that just threw him off his game,” Sacco said of the Woody Stephens. “Johnny [Velazquez] just collected him, but now we are in a Grade I, sitting 10 or 12 lengths off the lead, which is not normally where he is at. He is also not normally taking dirt like that. We came into the lane and the horse on the outside was obviously moving much faster than us. He got shut off and taken back abruptly at the eighth pole and we only got beat 4 1/4 lengths. The horse came out of the race awesome. He will be on the worktab over the weekend. We are looking at the [GII] Amsterdam [at Saratoga July 28] and the [GI] H. Allen Jerkens [S. Aug. 24] down the road has always been the main goal.”