Not This Time Back On Top at OBS 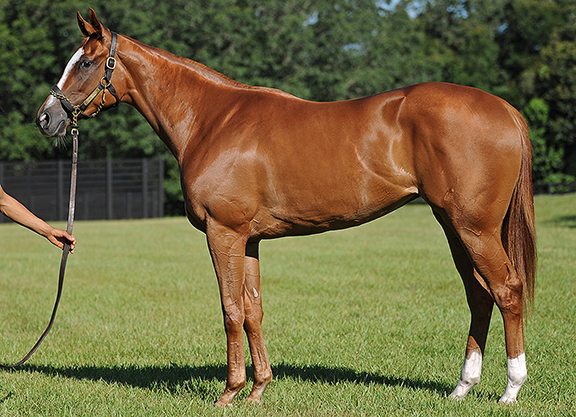 Hip 640 – Wednesday's Topper by Not This Time | Sandra Madison

A filly by freshman sire Not This Time topped the last auction in Ocala, the Ocala Breeders' Sales Company's Spring Sale, last month and the young stallion was back on top again at OBS Wednesday with one of his daughters (Hip 640) topping the day's trade at $270,000. Consigned by de Meric Sales, Hip 640 was purchased by Mike Mulligan's Emerald Sales on behalf of owner Tobey Morton.

“It's a bizarre market,” said Dennis O'Neill, who picked up the day's top colt, a $185,000 son of Half Ours (Hip 383). “When I got here, I was the only one here and I was joking when I was looking at horses, I said, 'Guys, I can't buy every horse in the sale.' It was really bizarre how few people were here Monday and then by Tuesday it had picked up.”

He continued, “It was really hit or miss. If you didn't have anybody on the horse you liked, it was very, very easy to buy. But, I got shut out on two horses which I couldn't believe because there weren't many people there. At this sale, I haven't seen any New York people or California people, so there aren't a lot of people who traveled out here, which I can understand with the quarantine and everything going on.”

Mulligan said he also felt the lack of representation from certain regions impacted the marketplace.

“There is virtually no demand for the lower or middle market horses,” Mulligan said. “Without influences from people taking horses out of the country–the Korean buyers have not been here–so the lower market is really getting hit hard. The top 5% or 10% of the horses here are fine. If the horse is worth $75,000 to $150,000, that horse is fine. Horses that are $150,000 and up to whatever the sale topper will be here, I think those horses are in really good order. But underneath that, it's tough. There is pretty solid demand. I got outrun on a couple of horses today. And so it's not like we are coming in here and buying everything.”

Horseman Randy Bradshaw is typically a seller at OBS, but this week he adapted to the unconventional times by trying his hand at buying to help those unable to make it to Ocala due to COVID-19 related travel restrictions. That meant the horseman was able to provide a market perspective from both sides of the fence.

“At this sale, it is definitely a buyers' market,” Bradshaw said. “You can definitely buy a nice horse for 50 cents on the dollar. Everyone is thinking about going back to the yearling market pretty soon. If you were buying, I think it was good, but if you were selling, I think it was not very good at all. It is tough to see people struggling, but hopefully the world will get back to normal and we can get back to work and do what we do.”

Silvestre Avila and his brother-in-law Chalino Lopez had tried to enter their Not This Time filly (hip 640), purchased for $19,000 at last year's OBS October Yearling Sale, at previous juvenile auctions this season, but the chestnut didn't make it into any catalogue until the July sale. She made the most of the opportunity with a bullet :9 4/5 furlong work last week and rewarded the two men when selling for $270,000 through the de Meric Sales consignment in Ocala Wednesday. Mike Mulligan's Emerald Sales made the winning bid on behalf of owner Tobey Morton.

“We had entered her in some earlier OBS sales and unfortunately she couldn't get in,” Avila said through an interpreter Wednesday. “I was thinking of going to Maryland, but with the COVID scare, I didn't know if the sale would go on. This was the last chance to sell her. She got in and did her thing.”

Avila, who has been a vital member of the de Meric team for the past eight years, purchased the filly before Not This Time's hot start on the track and in the sales ring this spring.

“In my mind, I am always trying to double or triple the purchase price. I do this to make a profit and that's what I am hoping for,” he said.

The only yearling Avila purchased last year, the filly impressed him right from the start.

“When I started getting her ready, she was very smart and super sound and never did one thing wrong,” Avila said. “I started noticing that she was doing everything really well and then, as God would have it, Not This Time started getting hotter and hotter. Fortune and good luck was on our side with that. Those are the things you can't control, but it favored us this time.”

Avila and Lopez had success pinhooking last year, selling a filly by Daredevil purchased for $5,000 at OBS October for $155,000 at OBS March, but Wednesday's result was their biggest sale to date.

“It is the biggest pinhook score that I've ever made,” Avila confirmed. “I am just humbled and grateful for the opportunity to do this.”

As for his plans for the upcoming yearling sales, Avila said, “If everything goes all right, with the way things are in the world, if there is a way for us to buy yearlings this coming fall, we will.”

A New York-bred filly, hip 640 is out of Exotic Design (A.P. Indy), a daughter of multiple Grade I winner Exotic Wood (Rahy).

She will be joining the New York stable of John Kimmel, Mulligan confirmed Wednesday.

“She is going to Saratoga to John Kimmel tomorrow or the next day,” Mulligan said.

Of the filly's appeal, Mulligan said, “When we watched the breeze show and after being in Maryland [for the Fasig-Tipton Midlantic sale] and seeing the top of the market being so strong, we felt like the top 30 or 40 horses here would be hard to obtain because quality horses are still in demand. That's the bottom line. We elected to go after that filly because she checked all of the boxes. She has amazing physical ability. She worked awesome, galloped out awesome. We thought she was one of the best fillies in the sale and the New York-bred was just a bonus for us.”

Bradshaw Gets New Perspective at OBS

Randy Bradshaw is usually selling at the OBS sales, but, in keeping with the unconventional nature of 2020, the horseman found himself on the buying side at this week's July Sale.

“I told some of my clients this is a great opportunity because horses are really going to be discounted,” Bradshaw said. “We knew New York people couldn't come down because of the quarantine situation. We are all in this together. Hopefully, I can help people out a little and get them through tough times, so when we can do that, that is what we need to do. We are probably going to put a partnership together.”

Bradshaw's first purchase of the sale was a colt from the first crop of Air Force Blue, who he secured for $100,000 Tuesday. The :21 flat breezer was purchased by consignor Brick City Thoroughbreds for $30,000 at Keeneland September. Hip 120 was bred in Louisiana at Summerhill Farm, which purchased her unraced dam Savviest (El Corredor) for $43,000 with this colt in utero at the 2017 KEENOV sale. Savviest is also the dam of SP Take Ten (Uncle Mo) and is a half-sister to GISW Tactical Cat (Storm Cat).

“I've liked the Air Force Blues all year,” Bradshaw said. “I have been a big fan from what I've seen. We were looking to buy a horse for Dallas Stewart and one of his clients and one of my clients. We do partner together. This colt is a May foal, so he looks like he is still growing, though he is plenty big enough now. He worked well, went out well and I decided to take a shot. Luckily we got him bought.”

During Wednesday's second session, Bradshaw picked up a daughter of Uncle Mo for $150,000 from the Gayle Woods consignment. Bred by Carhue Investments, Chelsea Bloodstock and Paget Bloodstock, the $45,000 KEESEP RNA is out of a half-sister to GISW Funny Moon (Malibu Moon). Hip 427 was clocked in :34 2/5 after bolting during her breeze.

“I loved her breeze,” Bradshaw said. “Turning for home, she bolted. She saw something on the inside and bolted to the outside. I counted the seconds and she lost two or three seconds before the rider got her straightened out and leveled off. We probably would have had to pay a lot more money for her if she worked straight. She had a nice pedigree and I am an Uncle Mo fan also. We got lucky and got her bought at the right price.” –@CDeBernardisTDN

Half Ours Colt to Reddam

Dennis O'Neill has had success prioritizing individual over pedigree when buying such standouts as GI Kentucky Derby winner I'll Have Another (Flower Alley) on behalf of California owner Paul Reddam and the bloodstock agent will be hoping the formula works again after purchasing a colt by Louisiana stallion Half Ours (hip 383) for $185,000 Wednesday in Ocala. Consigned by Sergio Centeno's Blue River Bloodstock, the bay colt blazed a quarter-mile in a bullet :20 1/5 during last week's under-tack show.

“This was a horse who fits our M.O.,” O'Neill said. “His breeding was a little sketchy to say the least, but we just loved his breeze. Usually you see these horses who breeze pretty fast and then you look at them and they are Quarter Horse-looking, really fast-looking horses. When I saw this horse, I called Paul and said, 'Man, he's really, really nice looking.' He has some length to him and some size. He just doesn't look like a horse that would go in :20 1/5. I told Paul, 'He is just the perfect horse for us. He's not going to be a million dollars because of his pedigree, but he looks like a running son of a gun.”

In addition to 2012 Derby winner I'll Have Another, Reddam has had graded-stakes success with other horses with less-than-fashionable pedigrees like Mistical Plan (Game Plan) and Great Hunter (Aptitude).

“We've had success in the past buying horses who had ability and looked good, vetted good, breezed good and weren't necessarily the best-bred horses in the world,” O'Neill said. “And Paul is a gambler. It didn't take a lot of convincing. When I called him, I thought I was going to have a heck of a time convincing him to do this. But as soon as I finished my sales pitch, he said, 'Get it done.'”

“I know they payed $1.35 million for a horse in that last sale that worked in :20 1/5,” O'Neill said. “To me, I thought this horse's breeze was just as good as that one. And this horse looked as good as that one. It was just obviously pedigree-wise a little bit different. I try to find individuals and the last thing I look at is the page. If you can get over that, we've been really successful buying the best horses of a certain sire. I think Half Ours is due to have a really good horse. Hopefully, we got the best Half Ours. That's our plan.” @JessMartiniTDN