No Doubting Stradivarius In The Lonsdale Cup 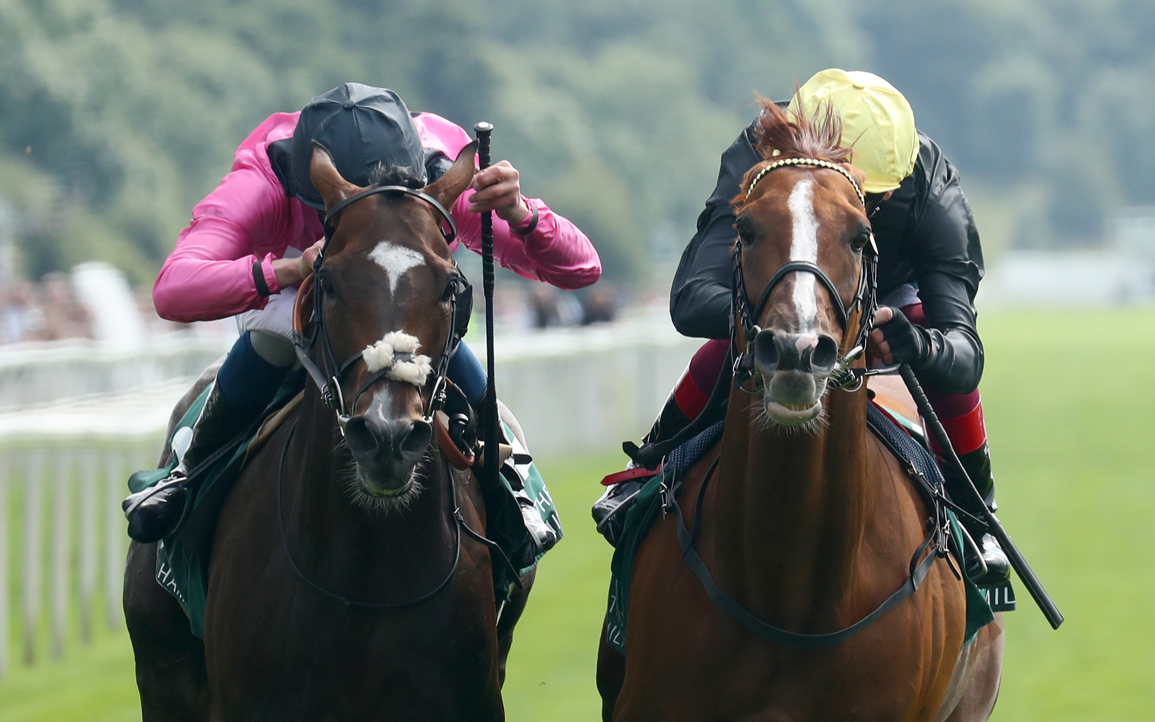 Stradivarius turns back Spanish Mission in the Lonsdale Cup | racingfotos.com

With the drying ground ruling out the G1 Goodwood Cup hero Trueshan (Fr) (Planteur {Ire}), Friday's G2 Weatherbys Hamilton Lonsdale Cup at York was teed up perfectly for Stradivarius (Ire) (Sea the Stars {Ire}) to register an inspiring third success in this marathon. Open to questioning following his fourth in the G1 Gold Cup at Royal Ascot June 17, Bjorn Nielsen's staying star was settled in second early by Frankie Dettori as The Grand Visir (GB) (Frankel {GB}) set off in isolation. Joined by Spanish Mission (Noble Mission {GB}) approaching two out as they loomed on the front end, William Buick had the upper hand for much of the rest of the distance and looked likely to prevail until the final yards. It was then that the 4-6 favourite was lifted by the crowd to give extra and outstay his chief rival for an 18th career and 16th pattern-race win by a head as The Grand Visir finished seven lengths adrift in third. “I'm feeling emotional,” Frankie said. “It was always going to be a messy race and I was using Richard [Kingscote on The Grand Visir] as a reference point, but Strad likes a target and so I pushed him close to William [Buick] and it worked–he only does enough and William would not go away, so it was a tremendous horse race. The reception he got–he's loved by everyone.”

One of the most consistent staying stars of all time, Stradivarius has drawn on his incredible constitution to maintain a level of ability that is still unattainable to much-younger rivals. Spanish Mission had shown when winning the G2 Yorkshire Cup and last year's G2 Doncaster Cup that he is a stayer of considerable merit and he held every chance of subduing the Gosden A-lister with everything to suit but ultimately came up short. With Subjectivist (GB) (Teofilo {Ire}) out of action for now, Stradivarius has the opportunity to garner more of these before time is called.

Dettori thinks there is more to come from the 7-year-old. “Every time he's run here I've felt he is below-par–he fell in the last two times he won this for the bonus–and I feel he's much better at Ascot,” he said of the hero of two Yorkshire Cups and the 2018 and 2019 renewals of this race. “He's getting older, he's getting wiser. He got the job done and knows exactly what he's got to do.”

John Gosden added, “He's phenomenal. All those miles of racing. I always think flat horses are at their peak at five, but some of the great jumpers race on so we'll see how he is. He's a very happy horse and he's got a very good sense of humour as well. As long as he's happy, we can keep racing. He was a really angry chap when he came home from Goodwood and hadn't run. He used to sting like a butterfly and float like a bee, but he's a little more rope a dope now! He's still up for it and it was a proper race for everyone to watch between two fabulous horses. The [Sept. 10 G2] Doncaster Cup is a possibility and there is Champions Day, I hope it's decent ground but if it's bottomless we might have to reroute.”

Anna Lisa Balding said of the runner-up, who is bound for the G1 Melbourne Cup, “He's run a hell of a race and I actually thought we'd won when he went ahead. I thought we'd got him, but we didn't. We'll stick to Plan A, Australia here we come and let's hope he does his stuff out there.”
Stradivarius is the last foal out of Private Life (Fr) (Bering {GB}), who was bought by Nielsen for 70,000gns at the 2006 Tattersalls December Mares Sale. She also produced the G3 Bavarian Classic and G3 Furstenberg-Rennen scorer Persian Storm (Ger) (Monsun {Ger}), the group-placed Rembrandt Van Rijn (Ire) (Peintre Celebre) and the stakes-placed Magical Eve (Ger) (Oratorio {Ire}). Like Peintre Celebre a descendant of the great Pawneese (Ire), who captured the G1 King George VI and Queen Elizabeth S. and the G1 Prix de Diane, she is also connected to the G1 Melbourne Cup hero Protectionist (Ger) (Monsun {Ger}).