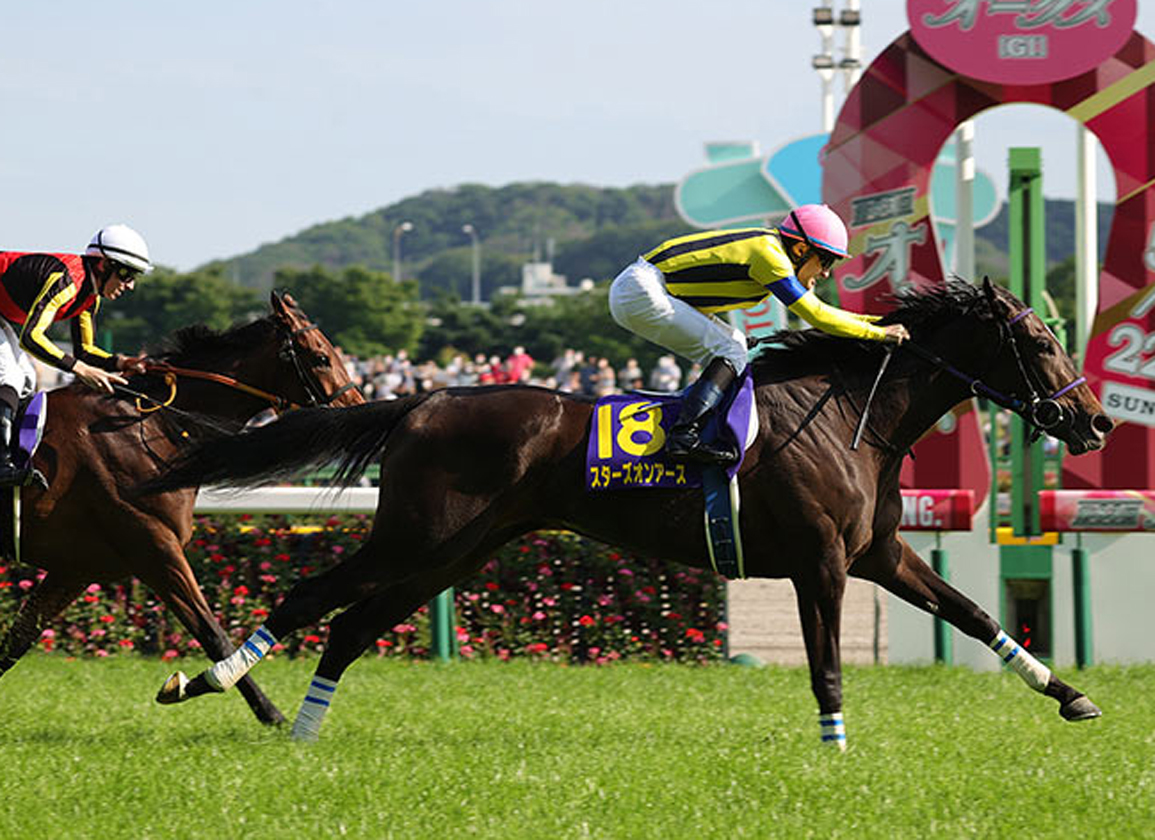 Sent off as the 5-1 third choice, the bay broke well from the widest gate in 18, but was stuck wide as the field strung out in the wake of Nishino Love Wink (Jpn) (Epiphaneia {Jpn}). Sitting in eighth, Christophe Lemaire had his filly relaxed on the backstretch and she remained there entering the second and final turn.

Wheeling into the straight with plenty of horse, Lemaire cut Stars On Earth loose and she immediately began to pick up with a quarter-mile to travel while out in the centre of the course. The pacesetter still maintained her advantage, but Nishino Love Wink was starting to flag and several rivals were ready to pounce.

Flashing the greatest turn of foot, Stars On Earth grabbed the lead inside the final furlong and fended off a late run from Stunning Rose (Jpn) (King Kamehameha {Jpn}) by 1 1/4 lengths. It was the same margin back to Namur (Jpn) (Harbinger {GB}) in third. Favoured Circle of Life (Jpn) (Epiphaneia {Jpn}), the champion juvenile filly in Japan last year was a 2-1 shot, but she broke slowly and never engaged, trailing in 12th of 18.

“I am really thrilled to have won in front of a big crowd today– it's really not fun to win with an empty stand so I appreciate all you fans for coming,” said Lemaire, who was winning his first Group 1 of 2022 and third Oaks after Soul Stirring (Jpn)        (Frankel {GB}) in 2017 and Japanese Fillies Triple Crown victress Almond Eye (Jpn) (Lord Kanaloa {Jpn}) one year later.

“The filly was in great condition coming into the race but it requires a lot of effort to start from an outside draw, so I was easy with her in early. She stayed calm and responded really well in the closing stages so I was happy. It was her first attempt at 2400 meters but her pedigree showed that she should be up in terms of stamina so I thought it shouldn't be a problem. She's already won at 1600 meters and shown to handle 2400 meters, so I think she has a pretty good chance to win her third Group 1 triple over 2000 meters.”

Never off the board in six previous starts, Stars On Earth broke her maiden at second asking last October and ran third in the Akamatsu Sho to Namur locally in November. She resumed with a runner-up performance to Lilac (Jpn) (Orfevre {Jpn}) (11th) in the G3 Fairy S. at Nakayama in January and filled the bridesmaid role again in the G3 Daily Hai Queen Cup here on Feb. 12. The Japanese 1000 Guineas, where she defeated Water Navillera (Jpn) (Silver State {Jpn}) (13th) was only her second victory on Apr. 10.

The second foal, runner and winner for her dam, who won once as a 3-year-old over 2000 metres in England, Stars On Earth is followed by a 2-year-old colt by Daiwa Major (Jpn). A homebred for Teruya Yoshida, Southern Stars, a half-sister to Lemaire's 2017 Japanese Oaks winner Soul Stirring and G3 Artemis S. victress Schon Glanz (Jpn) (Deep Impact {Jpn}), was covered by Mikki Isle (Jpn) last spring.