'Stars' Out in Oka Sho 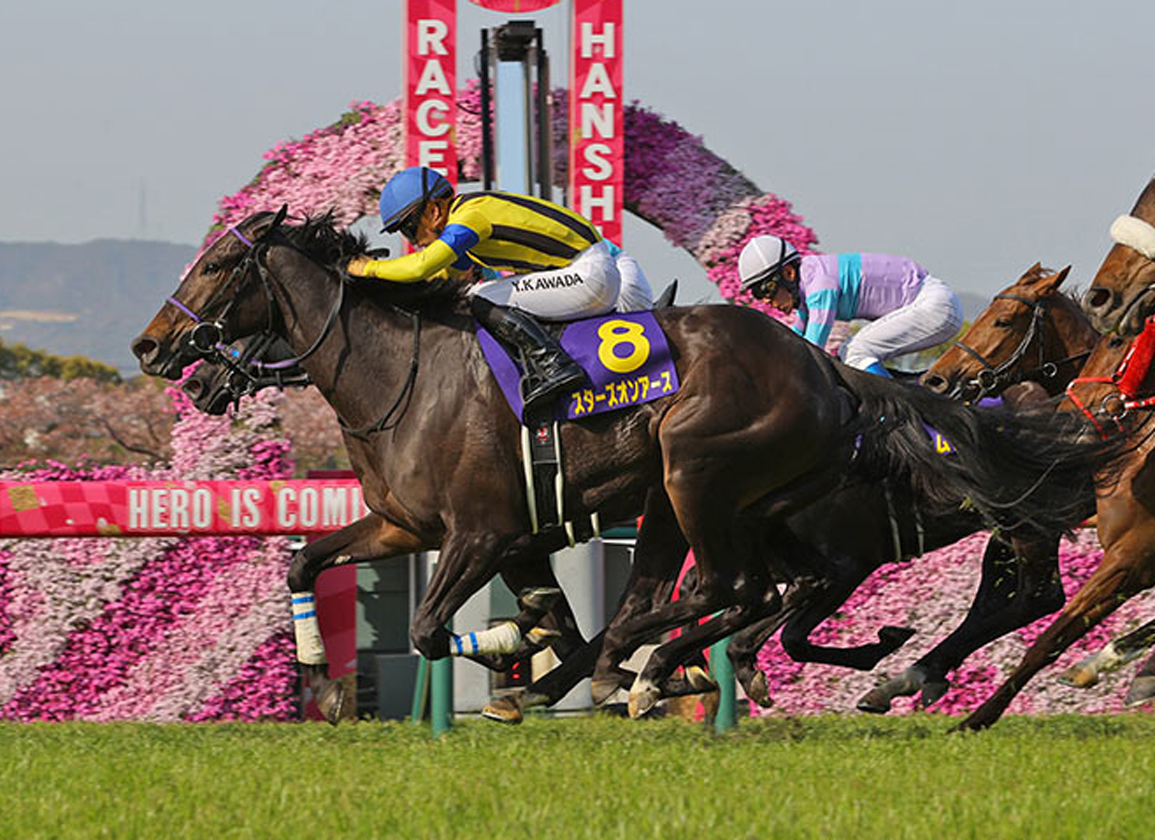 Stars on Earth (Jpn) (Duramente {Jpn) closed from off the pace to get her nose down in front of Water Navillera (Jpn) (Silver State) in Sunday's G1 Oka Sho at Hanshin, the first leg in the Japanese Triple Crown for fillies. The victory marked the first black-type score for the Shadai homebred.

The filly settled in midpack as Kafuji Tetragon (Jpn) (Kizuna {Jpn}) showed the way with Water Navillera in close pursuit. As the field constricted turning for home, Water Navillera gained control passing the furlong pole as Stars on Earth eagerly searched for racing room a few lengths behind. Finally finding a seam while brushing with rival the lates stages, Stars on Earth dug in late and made it up in time to edge Water Navillera at the wire. Race favorite and Tulip Sho victor Namur (Jpn) (Harbinger {GB}) had a wide trip near the rear after breaking from the widest stall and improved her position slightly before hitting the straight but lacked a final kick, finishing 10th.

“I'm just so glad that she actually snatched the win at the end–I knew we had caught up but couldn't tell who'd won,” said winning jockey Yuga Kawada, who last won the race in 2014 with Harp Star (Jpn). “I'd been aware during workouts that she was a bit difficult to control but besides keeping that in mind, the plan today was to stay in mid-pack and let her run in a comfortable rhythm. It was definitely her strength and determination that shone and gave us the win today. I'm looking forward to how she develops from here.”

Stars on Earth, a winner in her second career start at Tokyo last October, entered the Oka Sho off a pair of runner-up finishes in 2022 in the Jan. 10 G3 Fairy S. and G3 Queen Cup S. Feb. 12.

Pedigree Notes:
The Shadai homebred is one of two foals out of Southern Stars (GB), a minor winner out of grass champion mare and French Highweight 3-year-old filly Stacelita (Fr) (Monsun {Ger}), a winner of a sextet of Group 1/Grade I races, including the G1 Prix de Diane (French Oaks) and GI Beverly D S. That earner of over $2.3 million has also proven prolific in the breeding shed, foaling Japanese champion 2 and 3-year-old filly Soul Stirring (Jpn) (Frankel {GB}) and G3 Schon Glanz (Jpn) (Deep Impact {Jpn}). With Sunday's Classic victory, Stars on Earth becomes the second Group 1 winner for Duramente and the third group score for the Japanese champion.