New Racing Partnership Living Up to Its Name 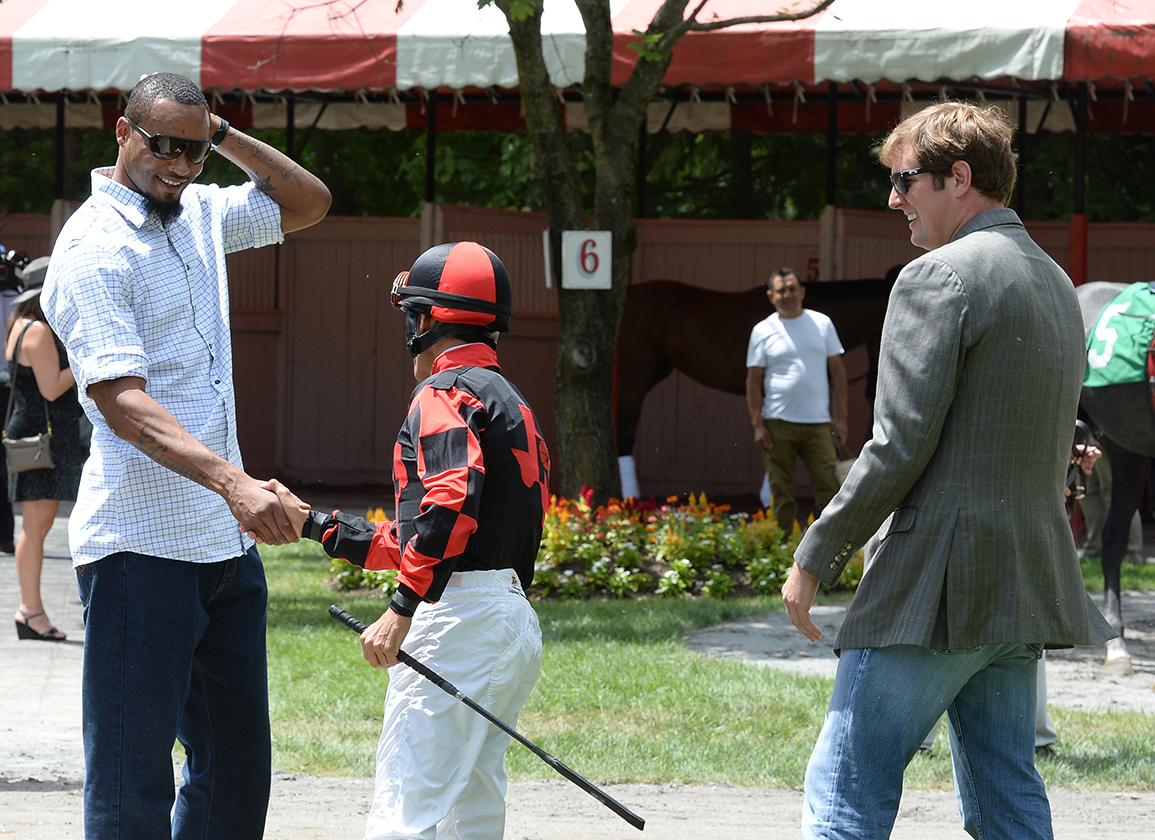 When Hidden Connection (Connect)–the co-second choice at 5-2 on the morning line for Friday's GI Breeders' Cup Juvenile Fillies–ran away to a daylight score carrying the colors of Hidden Brook Farm with Ocean Size back in second, the frontman for the fledgling partnership Black Type Thoroughbreds quickly switched gears.

“When she drew off at the eighth pole, I looked down at the Form again and I saw that Hidden Brook owned her. As soon as she crossed the wire, I sent [Hidden Brook's Bloodstock Services & Client Relations] Bryan Cross a text and said, 'If she's for sale, please let me know,'” Ballis said.

She was. But with the filly not even back to the winner's circle yet, the folks at Hidden Brook, quite understandably, needed a little bit more time to digest.

“I spoke to him again the next day and they wanted to wait for the numbers to come out,” the 41-year-old native of Houston, Texas said. “I made them an offer–I didn't care about any of the numbers–and they waited until Friday when the Rags came out and [Hidden Brook partner] Dan [Hall] called me and told me the figure. I told him that my offer stood. He came back with one other number and I just said, 'OK.'”

After working out a deal for a 40% minority interest for an undisclosed sum, the new partners and trainer Bret Calhoun began to set their sights on the first Friday in November at Del Mar via the 'Win and You're In' GIII Pocahontas S. Sept. 18.

“We were running back in four weeks off a really big effort going 5 1/2 furlongs and stretching to 1 1/16 miles and there were other options,” Ballis said. “I talked to Bret [Calhoun] and he told me, 'I've been training this filly for the Pocahontas before she broke her maiden. I'm not gonna get off that plan.' That's how high he was on her.”

You can certainly see why now.

Off as the 9-5 favorite while making her two-turn debut beneath the lights at Churchill Downs, Hidden Connection stalked and pounced her way to a second straight runaway decision, this time by 9 1/4 lengths, while establishing a new stakes record. She went two points higher on the Beyer Speed Figure scale as well, earning a very strong 87 rating.

“It's hard to be right in this game, so when you are, it's a lot of fun,” Ballis said. “We brought 40-something people to the race, too. She was very impressive.”

From just five horses to race, the early results for Black Type Thoroughbreds–launched in 2019–have been awfully impressive as well.

Up in Smoke (The Big Beast), a $230,000 Fasig-Tipton Midlantic 2-year-old purchase by Black Type and R. A. Hill Stable, hit the ground running with three straight victories at Gulfstream before adding a win in the Game Face S. in Hallandale and a third-place finish in Saratoga's GI Longines Test S.

Black Type, R. A. Hill Stable, et al, joined Fergus Galvin on the ownership line to repatriate Breaker of Chains (Bernardini) to these shores after a pair of placings in Ireland and were immediately rewarded with a visually impressive maiden tally at Kentucky Downs. She gave herself a bit too much to do after a slow start in a paceless race and had to settle for sixth, beaten only 3 3/4 lengths, in Keeneland's GIII Rubicon Valley View S. over yielding ground Oct. 29.

“Originally, it was just me, a couple of buddies and my family, and we kept it in house, then two years ago, I finally decided that I needed to get more people involved like Eclipse and West Point and all those groups that I want to emulate,” Ballis said.

“We've had five horses that have run–and two of them are Grade I-placed–and Hidden Connection won a Grade III and will be second or third choice in the Breeders' Cup. It's really been a heck of a ride. Maddie helps me with private purchases and also at the sales. She previously worked with Josh Stevens Bloodstock and gives me another perspective. She is a huge part of Black Type Thoroughbreds's success and future growth.

He continued, “To get a lot of friends involved from Houston as well as new partners–we only had six people put up money on our very first horse, which was Up in Smoke, and now I think I have close to 30–it means everything for me to be able to grow quick and have success for these guys. They trusted me and this year alone we've been able to take a lot of partners to the Kentucky Oaks and the Breeders' Cup. [Longtime friend and former NBA All-Star] Rashard Lewis owned horses with me back in the day and he got in on Hidden Connection. He's pumped up and hopefully he'll make it out for the Breeders' Cup.”

Ballis, a former standout college basketball player and the son of John Ballis of champion sprinter and GI Breeders' Cup Sprint runner-up Groovy fame, decided it was time to get his family back into the game after graduating from University of Houston with a degree in business management in 2003. Enter Groovy's former Hall of Fame rider Angel Cordero, Jr.

“I grew up flying with my dad to New York to watch his horses run,” Ballis said. “I was six or seven years old, so I don't remember a ton. But Cordero used to ride for my dad and he was the one that I reconnected with when I got out of college. He's been a mentor and has really helped us. Every horse that we buy I send him either replays, breezes, walking videos, etc. I value his opinion and he's still a big part of what we're doing. He was the guy that bought [2009 GII Pennsylvania Derby and GIII Tampa Bay Derby second and GI Kentucky Derby seventh] Join in the Dance (Sky Mesa) for us. That got the bug going for me.”

In addition to Join in the Dance, other previous success stories for Ballis include GSWs Cigar Street (Street Sense) and White Rose (Tapit) as well as three-time graded winner Race Day (Tapit), a $285,000 KEENOV horse of racing age purchase on behalf of owner Matthew Schera.

“Join in the Dance was our first horse and we went to the Derby and I figured it was easy,” Ballis said with a laugh.

With the imposing unbeaten 'TDN Rising Star' and MGISW Echo Zulu (Gun Runner) the clear-cut horse to beat, the task ahead will be anything but easy in the Breeders' Cup Juvenile Fillies. Still, Ballis remains confident as ever in Hidden Connection and the team behind him, which will be rolling 70-plus deep at Del Mar this weekend.

“I feel really good about Hidden Connection and all the partners involved,” Ballis concluded. “We have every bit as good a shot to win that race as any filly in the country.”