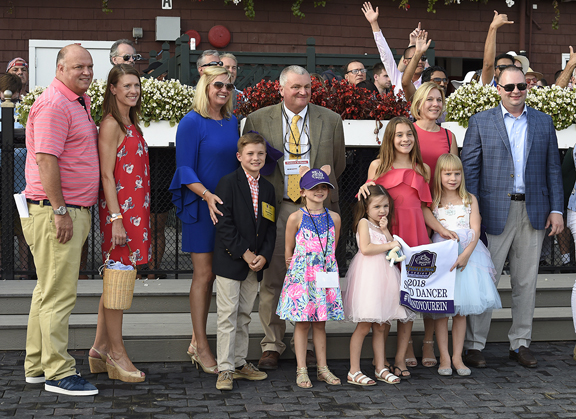 LOUISVILLE, Ky – Already armed with a degree in meteorology, it was a smooth transition for Matt Schera to begin trading energy commodities for a Connecticut-based hedge fund a little over a decade ago. It was his love for racing, believe it or not, that made it an even easier one.

“I know other good meteorologist who can forecast the weather well, but would have a lot of trouble with managing risk and having literally hundreds of millions of dollars on weather trades, or basically, weather bets,” Schera said. “But because I had been gambling on horses, really for my whole life, I had already experienced that feeling and I think it really helped me.”

“It would be a dream come true,” Schera said when asked what a Breeders' Cup victory would mean to him.

From Penn National to the Famed Twin Spires…

Growing up in Pennsylvania about an hour outside of Penn National Race Course, racing wasn't exactly love at first sight for Schera.

“It's funny because I just couldn't figure out for the longest time why my mom was so into this,” he said. “It just wasn't that exciting for me.”

That all changed right around 1994 as Schera began following the career of that term's popular Horse of the Year and champion 3-year-old colt Holy Bull. He also began attending the races with his mother at his hometown track around that time, too.

“He was my favorite and ever since then I kind of caught the bug and began handicapping and following horses,” Schera said. “It's such a puzzle handicapping races and it's really fun even outside of the betting part. I was a fan for a long time–my mom had the Breeders' Cup races on VCR tapes and I would just watch them over and over again. I used to write notes on all the horses and also saved the video tapes of their races. I never thought I'd own horses at that time. Luckily, things went in my direction.”

For some owners, racing is nothing more than an expensive hobby and a fun way to spend a weekend with family and friends. Schera is not one of them.

“I've put a serious amount of my money into this game and I'm trying to get a return,” he said. “I've told all my trainers time and time again, I won't keep doing it if we don't make money.”

Schera's current stable, which includes a handful of broodmares and babies, hovers right around the 40-head mark. That number has held steady without stocking up at the yearling sales this fall.

“I've always been trying to make a profit and that's not something I just say,” the graduate of Penn State University said. “I'd really like to make this a business that can last and that's why I think yearlings have kind of taken a back seat.”

Schera, instead, prefers to add to his barn via the claim box or through private purchases. This summer's GI Sword Dancer S. and GII Bowling Green S. upsetter Glorious Empire was claimed by trainer Carlos Martin on behalf of Schera for just $62,500 in May 2017.

“When I have a line on how the horse runs and can actually see its past performances, I do much better,” Schera said. “I enjoy the chase of trying to find the good horses and also doing the hard work and research end of it. I don't really like the lottery ticket of an expensive yearling. Obviously, they're riskier, but they also have more upside.”

Schera added with a laugh, “I guess 'Glorious' is pretty good upside for his claiming price, though.”

Three years before celebrating his aforementioned first Grade I victory at Saratoga, three-time graded winner and current Spendthrift Farm Kentucky stallion Race Day (Tapit) helped put Schera on the map with wins in the 2015 GII Oaklawn H., GII Hagyard Fayette S. and GIII Razorback H. Already a two-time winner at the time, Race Day was acquired as a 3-year-old by Schera for $285,000 at the 2014 KEENOV Sale from the WinStar Horses of Racing Age draft.

Isotherm–more on him in a bit–punched his first ticket to the Breeders' Cup as a 2-year-old with a narrow win in the 2015 GIII Pilgrim S. at Belmont Park. The $120,000 KEESEP yearling purchase was unplaced in that year's Juvenile at Keeneland.

And the story behind all those weather-related names and lightning bolt on Schera's light blue-and-yellow silks?

“Even before Penn State I was a complete weather fanatic as a kid,” Schera said. “I was out measuring snow and recording weather casts on my Fisher-Price tape recorder. I really had a passion for it growing up. I was very good at forecasting and won various contests in college.”

He began his professional career forecasting for AccuWeather, then worked for an energy company-also forecasting the weather as well as working with traders–in Baltimore, Md. Schera left that post 12 years ago for his current role at the Tudor Investment hedge fund in Greenwich, Ct.

Racing for as low as a $50,000 tag last term, the front-running Glorious Empire will line up for the Breeders' Cup Turf for trainer James “Chuck” Lawrence off consecutive wire-to-wire victories at Saratoga–a dead-heat tally at 22-1 in the Bowling Green July 28 and a 15-1 decision with a career-best 106 Beyer Speed Figure in the Sword Dancer last time Aug. 25.

Schera embraces the underdog role for his 7-year-old gelding, who has battled his way through a well-documented history of bleeding.

“It's sort of the Rocky angle,” Schera said of Glorious Empire, listed at 12-1 on the morning line for the Turf. “That scene where he's punching the meat bag in the locker and they say that Apollo should come and watch him-that was Glorious Empire this summer. He was working like that and no one was paying attention to him.”

Although winless since a score in the 2017 GII San Marcos S. over the Santa Anita lawn, Isotherm, now trained by Phil D'Amato, cuts back in distance for the one-turn Breeders' Cup Dirt Mile following a pair of good efforts in defeat, including a third-place finish behind likely Classic favorite Accelerate (Lookin At Lucky) in the GI Awesome Again S. Sept. 29.

“It's hard in life to actually accomplish the things you dreamed about as a kid and it almost never happens,” Schera concluded. “But in my life, between meteorology to the family and kids, everything has worked out and I'm just thankful that I even have a shot.”