More Letters on Tracks Gone But Not Forgotten 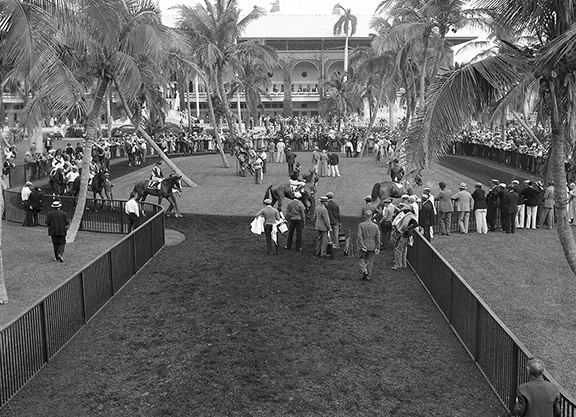 The paddock at Hialeah | Keeneland Library

In Sunday's TDN, we published Bill Finley's ode to shuttered racetracks, and asked others to try to beat his number of 28 at which he had attended live racing. The letters continue to pour in from readers sharing their own memories of their favorites. Here is a sampling.

Thanks for the article about all the race tracks that are now gone. I also grew up in Philadelphia and my parents were big horse race fans. I got my first exposure to horse racing at Delaware Park since they let children attend the races. Later I attended both Garden State Park and Atlantic City. When Pennsylvania legalized betting on horse racing I also attended Liberty Bell Park and got my first exposure to seeing winter racing. As noted those winter dates included some really cold days. When I became an adult I introduced my parents to some of the other racetracks around the country and made many trips to Hialeah as well as visiting Suffolk Downs, and the pre-fire-destroyed Arlington Park. I also visited on my own some of the other tracks mentioned such as Bowie, Bay Meadows and Hollywood Park. My job included traveling to other parts of our country and if there was a race track nearby I would always try to attend if live racing or simulcasting if it was offered. I have also visited the major tracks and attended all of the Triple Crown races. But as noted I preferred visiting the older, smaller, working-class tracks like Waterford Park now Mountaineer in West Va. As you can tell from all the old tracks I have visited I am an older fan. So I have seen first-hand how expanded gambling options and more tracks having longer meets have made it harder for any track to survive today. Let's hope we are not the last generation to enjoy the excitement of attending a live horse race near our hometowns.
-John Chambers

Having spent much of my wayward youth on the Cape in Mass., my recollections of the Marshfield and Weymouth Fairs hold a special place in the horse racing crevices of my heart. Wasn't there a Brockton Fair that had a one week meet, after Marshfield and Weymouth? Seems to me I recall going.. But it would be in the 60's, if my memory serves. Anyway, thanks for the memories
—Tom Mina

Bill,
You wrote an entertaining but bittersweet tale.
I've been to 116 tracks worldwide (counting harness) but you're way ahead of me on ones that no longer are running: Suffolk, Atlantic City, Hialeah, Hollywood Park, Bay Meadows, Portland Meadows, Greenwood (Toronto), Calder, Hippodrome de Montreal, Ladbrokes, DRC, Roosevelt. Just 12.

I'm sure if you counted harness that you'd have many more.
–Ed McNamara

Loved your piece that a friend passed on to me.

While my experience at North American tracks is not as extensive as yours, like you and your father, I've always tried to find new tracks whenever I traveled. I've done that throughout my travels, which fortunately have been extensive. I've even gone to a track outside of Paris that was later shut down: Evry.

Like you, I spent my formative tracks years in the U.S. in Massachusetts, when I was a graduate student at Brandeis in the 60s.

Two tracks that I went to then were Narragansett Park and Lincoln Downs. I guess by the time you were in Massachusetts, they'd been gone too. While Lincoln was still lively, Narragansett was on its last legs and was sad. I also went to Timonium once, visiting my parents in DC.

Like you in Philly, a colleague and I would pause our lab work in Waltham, drive the Mass Turnpike and then the tunnel to Suffolk. We arrived after the 6th, when it was free to enter. We'd pick up a program from someone leaving and bet four races. Then back to the lab the same way we came. Weekends were dedicated to Rockingham, easy to get to from Waltham: take 128 north to I-93, which led directly to the track. Lots of people there in those days.

I moved to Toronto in 1967 so my U.S. tracks days have been episodic since then. By the time I arrived here all the original tracks dotted around the city had been shuttered by EP Taylor as he consolidated racing at Woodbine, which then became Old Woodbine, then Greenwood and is now a park and housing. Fort Erie is only held together by political handouts, abandoned by the Ontario Jockey Club. It was a lovely summer track, not as grand as Saratoga, but with the same spirit.

All the best,
–Manuel Buchwald