Home » Archive » Shared News » From Maine to California, These Tracks Are Gone, But Not Forgotten

From Maine to California, These Tracks Are Gone, But Not Forgotten 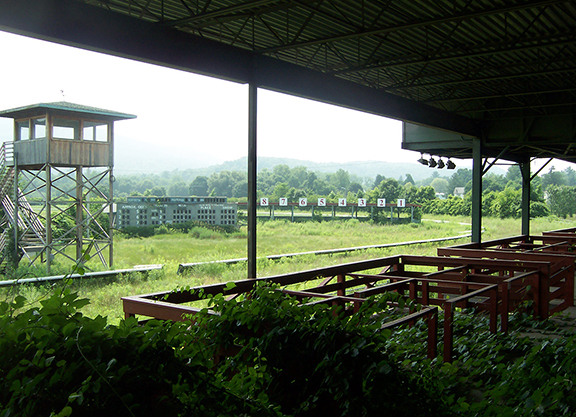 Do you remember Bowie? The Marshfield Fair? Or, how about Liberty Bell? I do. I've been to them all.

Someone sent me a link the other day to a list of all the defunct racetracks in the country and it got me thinking how sad it was that I had been to so many that have disappeared into the ether. That and whether or not I hold some sort of unofficial record of having attended more former racetracks than anyone else. I have been to 28 North American tracks that no longer operate Thoroughbred racing.

I started compiling the list when I was just a small child and my father would take me to the local tracks near Philadelphia and along on a lot of his business trips so that we could visit a new track in a new town. It grew when I attended college and picked up the Massachusetts fairs, Suffolk Downs and Rockingham, all of them now gone. My early years as a racing writer took me to places like Hialeah and Hollywood Park. One is a casino, the other a football stadium. There are so many that were unable to make it in an era where outside competition for the gambling dollar, real estate values and racing's struggles to expand its fan base have made staying in business hard to do.

In a few days, I will be able to look back on the 48th anniversary of the first time I saw Secretariat run in person. It was Nov. 18, 1972 and I lived in the Center City section of Philadelphia and, of course, our family was not going to miss the opportunity to see Secretariat run in person in the Garden State Stakes. He was on the verge of superstardom and his appearance at the Cherry Hill, New Jersey, track drew a crowd of 25,175. The great horse did not disappoint, winning by 3 ½ lengths in his final start as a 2-year-old, cementing his first of two Horse of the Year titles.

The track burned to the ground in 1977, but was resurrected in 1985 by Bob Brennan. The new Garden State was supposed to be “the track of the 21st century” but come the early 2000s, its days were numbered. Unable to compete with the Atlantic City casinos and with too many racetracks in the Mid-Atlantic region for horseplayers to choose from, it limped to the finish line and never ran again after a short meet that ended in May of 2001.

Today, over the hallowed ground over which Secretariat, Bold Ruler, Kelso, Dr. Fager, Citation galloped down the stretch you can find a Cheesecake Factory. Very depressing.

Through the seventies and eighties I made many a trip, as well, to Atlantic City Race Course. My brother worked for Philly's afternoon paper, the Philadelphia Bulletin, and, after his workday was done, we'd make the short trip down the Atlantic City Expressway to catch the last half of the card. Like Suffolk, Atlantic City limped along for years with short meets that allowed them to maintain their license, but ceased racing after 2014. The track still sits there, its owners trying to figure out what to do with the property.

The tracks I really miss are the ones in New England that were such a huge part of my life while I majored in Suffolk Downs and minored in economics while a student at Tufts University. There was a time when there were tracks in Massachusetts, New Hampshire, Vermont, Rhode Island and Maine. They are all gone, leaving an entire region of the country that once embraced racing without a single track.

I made it to the old Rockingham once, early on in my freshman year, before it, too, burned down, in 1980. It was rebuilt and reopened four years later, but the new Rockingham was one of those places where there was no there there. It ran its last Thoroughbred race in 2002.

My favorite track, maybe of all time, was Suffolk Downs. I had an affinity for a hardscrabble, blue-collar, unpretentious track nestled between oil tanks where much of the racing was conducted during the harsh New England winter. For those who prefer Saratoga, Del Mar, Santa Anita, I don't expect you to understand.

Suffolk Downs held on as long as it could, holding five or six-day meets to keep its license while ownership hoped to be granted a casino license. When Suffolk lost its bid, it was over. The track last raced June 30, 2019, and I was there to say goodbye. The property will soon be developed and include housing, stores, offices, you know, the usual stuff.

The Massachusetts fairs didn't make it nearly as far. Back in the day, there was nothing like them. With a Ferris wheel, carnival games and 4-H club exhibits as a backdrop, Marshfield, Northampton and Great Barrington were New England institutions. With the legalization of pari-mutuel wagering in Massachusetts in the thirties, a thriving fair circuit got going, a refuge for horses and jockeys that couldn't win any place else. Everybody who went to the fairs had a story about the fairs, like seeing 17-year-old Golden Arrow win at Great Barrington in 1978 or the time Zippy Chippy finished second at Northampton in his 98th attempt to break his maiden. And who can forget all the races that were fixed? There were hundreds of them over the years.

The fairs were so popular that a crowd of 27,048 once showed up at Great Barrington, which called itself “the Belmont of the Berkshires.” But they were a product of a very different time in racing. Northampton was the last survivor, running its last race in 2005. The fairs at Marshfield and Northampton continue to this day. Great Barrington has completely closed but there was talk before COVID-19 that it would be revived and run some of the dates normally reserved for Suffolk Downs.

I caught Ak-Sar-Ben near the very end. The same racetrack that once regularly drew 25,000 people Saturdays was crippled by competition from casinos in bordering states. It last raced in 1995

and the property has been converted to something called Aksarben Village, a development that includes part of the campus of University Nebraska-Omaha and a Godfather's Pizza shop. I imagine Ak-Sar-Ben was a great track in its prime.

Bay Meadows is gone. So is Beulah Park, the Woodlands, Bowie, Liberty Bell, Sportsman's Park, Manor Downs. I have been to them all. Green Mountain, which hadn't run Thoroughbreds since 1976, burned to the ground in a suspicious fire just this last September. I remember taking the short trip over from Saratoga to catch a card at what was one of the sport's most remote racetracks.
There was no saving most of these tracks. The exception is Hialeah. When it comes to sheer beauty and class, there was a time when it had no equal. To this day, the track's website refers to it as “the world's most beautiful race course.” Losing out on a war for the prime Florida dates, it became less relevant with each passing year until it ran its last Thoroughbred race in 2001. But still it sits there, kept somewhat alive by slot machines and fake quarter horse races. That the sport has never come together and found a way to bring Hialeah back to life is a failure that should have been corrected long ago.

There will be a new member to this list in just a few weeks. Calder/Gulfstream Park West is set to close for good after the Nov. 28 card. That will make my number 29. I'd be fine if it stopped right there.

Editor's note: Think you can beat Bill's Finley's visits for live racing to 28 (soon to be 29) defunct tracks? Email us at [email protected]