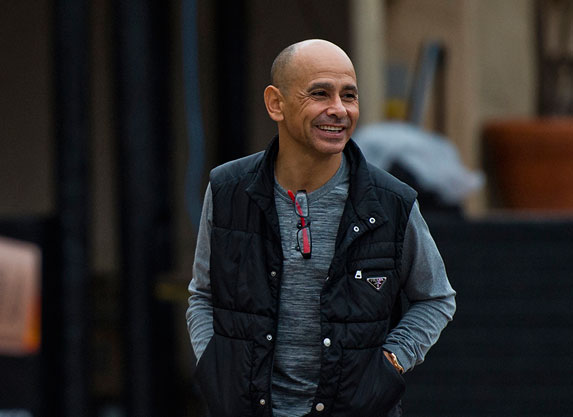 Back home in California after finishing second aboard Midnight Bisou (Midnight Lute) in the inaugural running of the $20-million Saudi Cup, jockey Mike Smith said the penalties handed down to him for excessive use of the whip were “absurd.”

Under rules enacted just before the running of the Saudi Cup card, riders were limited to striking a horse no more than 10 times during a race. The Saudi stewards ruled that Smith struck Midnight Bisou 14 times and also was guilty of hitting his mount with no regard for the horse's stride. The end result was a nine-day suspension and forfeiture of 60% of his fee for riding Midnight Bisou to a second-place finish. The fine adds up to a steep $210,000.

“I was extremely surprised,” Smith said. “It was so severe. I understand that if you go over that number you're going to get some sort of suspension. By the time they were done, they wound up suspending me nine days and that's about a month in California since we only race three days a week. Then to add in a 60% penalty as well, that's absurd. That's going way too far. A whole month off and then a quarter-million dollar fine, it's too much. This will be the biggest penalty against a jockey in the history of horse racing.”

Smith's suspension, which is recognized by U.S. racing authorities, is set to start Friday. In a statement on Twitter, the California Horse Racing Board said it is “reciprocating with the ruling(s) in Saudi Arabia suspending Mike Smith. We are seeking clarification on the precise dates of their suspension(s). The first date of their suspension, Mar. 6, is clear, so Smith is not named as a rider on the Friday program at Santa Anita.”

Smith said he is considering his options and may file an appeal. Before he does so, he said, he wanted to confer with Santa Anita racing officials to see if he would be allowed to ride in designated stakes races while otherwise suspended. He added that it has been difficult to communicate with Saudi racing officials because of the time difference between Riyadh and California.

“Right now, I am trying to figure this all out,” he said.

Among the things at stake for Smith is whether or not he will be permitted to ride on Saturday's rich card at Santa Anita, which includes the GI Santa Anita H. and the GII San Felipe S. If Smith does appeal, it's not clear what the path would be to having the penalties overturned or lessened since he is not claiming that he did not break the rules.

“I understand that when you pass a number you're going to get hit with a suspension, but to get fined a quarter-million dollars and get a month off in the States, that is it kind of mind-blowing,” he said.

Midnight Bisou was last in the early going before making her move on the far turn while saving ground. She wound up losing to Maximum Security (New Year's Day) by three-quarters of a length. Smith said one of the reasons he felt he needed to keep using the whip on his mount was that she distracted by a car that was running in front of the field with a camera.

“I'm trying to get through down on the fence and they have a car driving in front of us filming us,” he said. “She's looking at that car and trying to get out. I'm trying to get her to focus and go forward because I have a chance to win this thing. She's busy looking at the car and trying to get out. She's in behind another horse's heels. I certainly don't want to clip heels. You lose count [of how many times he used the whip]. When that happens, what do you do? Just give up? By no means was I abusing her at all. Matter of fact, I flagged her most of the times. I wasn't even hitting her, I was just waving my arms, showing her the stick. She had her eyes fixed on that SUV up in front of us.”

Smith said he would never intentionally abuse a horse and did not feel he did so aboard Midnight Bisou.

“With me, the horse comes first and foremost, always,” he said. “I would never put a horse or any human in harm's way. I didn't do that. I went over a number and that's it. It's very frustrating. I understand they have rules and that I went past that number, but that's all I did. It is crazy. I was floored. They went way beyond.”

Smith received another suspension of two days for failing to weigh in after an earlier race on the card. He said that was a result of confusion among Saudi racing officials.

“This was very confusing,” he said. “I was asking, Do I unsaddle here?' They said, 'No, unsaddle down there.' Next thing you know I got another two days because I didn't weigh out. I told them I asked an official where I was to go to and they sent me to wrong place. Their answer was that I should've known better.”

Irad Ortiz, Jr. was also hit with a severe penalty by the stewards as he was given an eight-day suspension for overuse of the whip during a race on Friday and another two days for excessive use of the whip aboard Mucho Gusto (Mucho Macho Man) in the Saudi Cup.