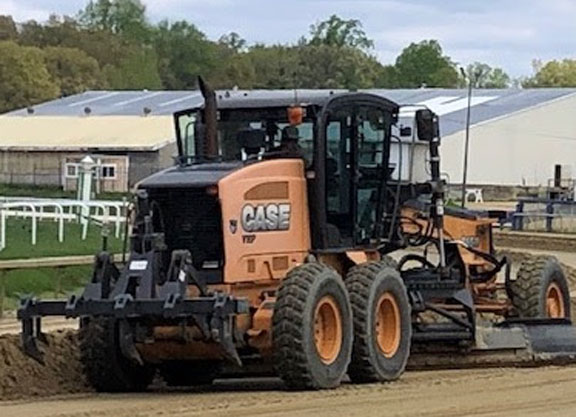 Difficulties with the dirt track base repair and cushion resurfacing project at Laurel Park continue to mount, with the loose-ended timetable for the work now expected to extend at least until the start of July.

Executives with The Stronach Group (TSG), which owns both Laurel and Pimlico Race Course, said during a Friday tele-meeting that they now need to pause work on the problematic and expensive project at Laurel until management can relocate of all horses stabled at Laurel to other facilities in Maryland.

This news was delivered two weeks after TSG came under fire at a Maryland Racing Commission (MRC) meeting for an alleged “accumulation of bad decisions over time” that led to Laurel's main track safety concerns not being addressed sooner by track management.

At that Apr. 22 meeting, TSG's senior vice president of racing, Steve Koch, told commissioners that Laurel would tentatively be back up and running by the start of June, with limited training allowed at the facility and horses vanned to Pimlico for timed workouts. That plan changed last week when TSG announced all horses would instead have to vacate the property.

The cumbersome logistics of orchestrating such a large horse and worker migration on short notice couldn't come at a worse time for TSG and Maryland horse outfits, with the GI Preakness S. week on the cusp of getting underway at Pimlico.

During the May 7 meeting, Koch projected a new, albeit hazy, timeline for the completion of repairs.

“At the moment, we've requested of the racing commission that the race meet remain at Pimlico through the end of June, so returning early July to be back at Laurel,” Koch said. “There's a lot of unknowns as we get into this racetrack [project and] we'll know more as this thing unfolds.”

Although Butler's words were meant to be figurative, as Friday's meeting evolved, it became clear that felines and rodents were literally involved in the ever-widening scope of the project.

That's because TSG will use the opportunity of having a vacant barn area to launch its most thorough rat extermination attempt to date.

Back in January, TSG executives confirmed to the racing commission that spending $20,000 monthly to try and eradicate rodents while horses remained stabled on the grounds wasn't working, largely because of the abundance of unsecured or spilled horse feed kept the rats well satiated.

Dionne Benson, TSG's chief veterinary officer, said during Friday's meeting that in addition to everything else, that means backstretch outfits will have to attempt herd their barn cats and bring them along once they get stall reassignments at either Pimlico or the Timonium fairgrounds. This is because of concerns that the cats could be poisoned by eating either the rodenticide or a rat that has consumed it.

Then MRC commissioner David Hayden suggested that all hay and straw should also be removed from the backstretch to eliminate another readily available food source for the rats.

David Richardson, the executive director of the Maryland Thoroughbred Horsemen's Association, said that hay and straw removal would be done if the exterminators recommended it.

Richardson asked trainers to expediate getting their requests in to the Laurel racing office about their preference–either Pimlico or Timonium–for being relocated, and to note if their stable help will need living accommodations at either venue.

TSG will provide a shuttle service to those tracks for employees who wish to remain in their Laurel living quarters, and trainers can still keep tack and other personal property secured at Laurel, so long as nothing gets stored in stalls.

To date there have been 789 stall requests: 502 for Pimlico and 287 for Timonium, meaning the majority of outfits will not make the cut for the preferred stabling at Pimlico.

Richardson said that the day after the Preakness, construction will begin on three new 40-stall barns at Pimlico, and that temporary stabling there will also be made available.

As for the housing of backstretch workers, those who opt to live on the grounds at Timonium could end up relegated to either the jockeys' quarters or some other areas that have access to bathrooms and showers, because there are currently no dorm facilities there that meet fire code requirements.

“There are still a lot of items that are outstanding,” Richardson said, underscoring the difficult nature of the transition.

TSG executives also addressed the implications of turf racing in Maryland because of the  extended meet at Pimlico.

Koch said the grass course at Pimlico–which is only half as wide as the one at Laurel–will, per usual, get used “very, very heavily” on the Friday and Saturday of Preakness week.

“So yeah, there are [future] constraints on that course in the sense that, you know, how much [use] can 70 feet sustain compared to the 140 feet that we have at Laurel?” Koch asked rhetorically.

Butler then picked up the topic: “If it's usable we will use it. Once it's through the big weekend…we're going to use it as often as we can.”

Even before Laurel's main track woes arose this winter and spring, TSG executives were on record as contemplating the addition of a synthetic racing surface there.

Butler said on Friday that with the base now exposed, TSG has the opportunity to assess what the scope of that project might look like. But he added that the synthetic option won't be contemplated until a later date–which will eventually mean more logistical headaches.

“Because there is a very high likelihood of us putting in a tunnel at Laurel, there is no way to drill under the track,” Butler said. “That will have to be a section…cut completely down through the substructure. That means later, when we come to replacing and putting in tunnels and replacing surfaces, or having new surfaces, I should say, there is unfortunately going to be some more disruption.”