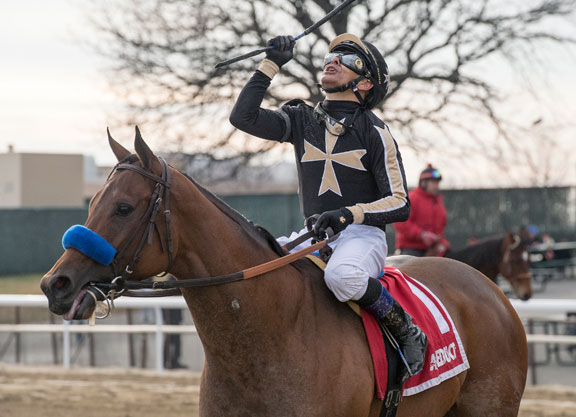 Victorious in six of her last seven trips to the post and arguably unlucky to have lost on that one occasion, Cicero Farms' Marley's Freedom (Blame) looks to hold all the aces in Saturday's GI Beholder Mile S. at Santa Anita.

Transferred to the Bob Baffert shedrow last May, she won her first three outings, capped by a tons-the-best 3 1/4-length tally in the GI Ballerina S. at Santa Anita Aug. 25. Saddled with a difficult draw in gate 13 for the GI Breeders' Cup Filly & Mare Sprint, she raced much further from the pace than is her custom, was fanned very wide into the lane and came running, but could do no better than fourth, beaten a length. Stretched to Aqueduct's one-turn mile for the GIII Go For Wand H. Dec. 1, she prevailed by a hard-fought neck and most recently easily accounted for 'TDN Rising Star' Selcourt (Tiz Wonderful) and Mopotism (Uncle Mo) in the GII Santa Monica S. Feb. 16.

Like the favorite, Selcourt tries two turns for the first time in her career, although in her case, it is her first race beyond seven furlongs. The chestnut handled Marley's Freedom in the 2018 Santa Monica, but didn't see the starting gate again until the Breeders' Cup, where she finished 12th after setting the early pace. She was a disappointing second in the Jan. 13 Kalookan Queen S. and was no match for Marley's Freedom in defense of her Santa Monica title.

'TDN Rising Star' Paradise Woods (Union Rags) posted giant figures in winning the 2017 GI Santa Anita Oaks and GI Zenyatta S., but is winless in six tries since the latter event in September 2017. The bay was most recently a weakening fifth in the Santa Monica, but could improve with a stretch-out to the two turn mile.