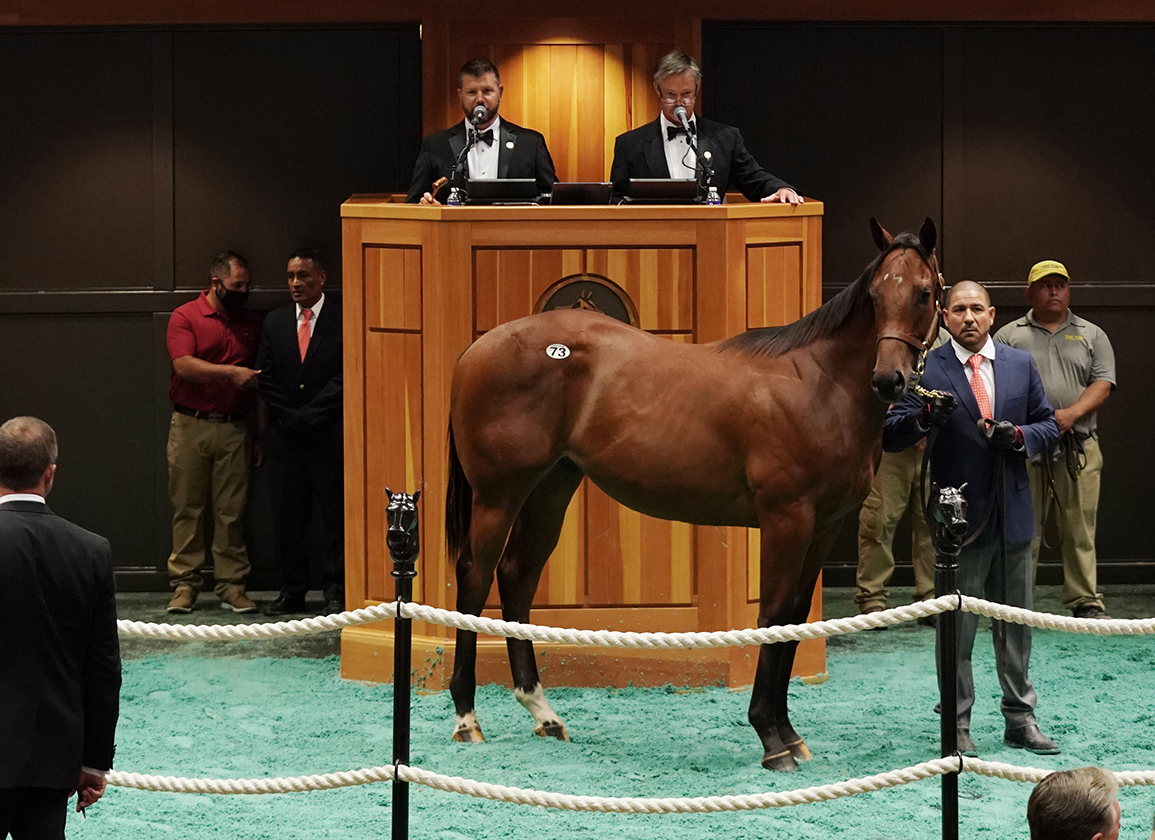 Lynn Hancock takes the reins in running the Stone Farm consignment to a successful finish at the Fasig-Tipton Saratoga Sale. | Fasig-Tipton

Lynn Hancock breezed through the Fasig-Tipton sales grounds early Tuesday morning last week, heading for Barn 1 wearing a baseball cap and a smile. After a long stretch of days running a successful consignment at the Fasig-Tipton Saratoga Selected Yearlings Sale, Stone Farm's Director of Racing and Sales had enjoyed a night of celebration when her consignment sold the highest-priced yearling of the auction's first session.

“I didn't want to get out of bed this morning, but the horses needed fed,” she said with a grin, nodding toward the pair of stalls that had recently been vacated. The youngsters had shipped out shortly after their morning feed.

There was plenty of cause for Hancock to savor all festivities the Saratoga Sale is known for. The youngest daughter of Stone Farm founder Arthur Boyd Hancock III had successfully sold both yearlings at the first Saratoga consignment she had brought up on her own.

“Dad has always been here,” Hancock said. “This was my first consignment coming up here by myself. Even though my dad was guiding me from afar, it was very rewarding to come up here and put in a lot of work. It's not easy to get these horses to this point from the time they're foals up until now. To bring them up here and get the results that we had, it's exciting.”

When Hancock, alongside a few of her farm's best horsemen and the two sale-bound yearlings, arrived in Saratoga, she knew the colt out of Dame Dorothy (Bernardini) could be something special.

“I wasn't sure what to expect, but we knew it was a nice horse,” she said. “He has done everything right since the day he was born.”

Dame Dorothy has been a special horse for breeder and celebrity chef Bobby Flay, taking him to the winner's circle in five stakes including the GI Humana Distaff and giving him two successful yearling sales already in Spice Is Nice (Curlin), a $1.05 million yearling who went on to earn graded stakes status this year for Robert and Lawana Low, as well as a 2-year-old colt named Principe d'Oro (Medaglia d'Oro) purchased for $650,000 by Juddmonte, Bridlewood and Winchell Thoroughbreds last September.

“He has always been an easy keeper,” she explained. “I would say he was a gate hugger. My dad always said that's a sign of a good horse. When you turned him out, he would turn back around and come hang out at the gate, curious and interested. When you ask him to do something, he does it. Horses like that you keep an eye on because you expect something from them. I've always really liked him.”

Buyers liked the colt as well and when the son of Uncle Mo was the consummate professional in the sales ring, bids flew. The hammer dropped with a $1.6 million winning bid from Jacob West, agent for Spice Is Nice campaigners Robert and Lawana Low.

“He did everything right and when he came up here, he showed well,” Hancock said. “It's fun to bring one that you feel a bit of connection to and get those results. It's very rewarding and it's not easy to do. Breeders will know that you can have a well-bred horse and have all kinds of issues, or things will go right and all the stars align and you can bring them here and have some fun.”

The stars had aligned two years earlier in Saratoga for Stone Farm and Flay when their Curlin colt out of GSW American (A.P. Indy) was the co-topper of the sale, going for $1.5 million. Now known as First Captain, the promising Shug McGaughey trainee took the GIII Dwyer S. in July and is now pointing towards the GI Pennsylvania Derby.

“First Captain was similar in a lot of ways to this Uncle Mo colt,” Hancock said. “He was very laid back. Those well-bred horses, it's really fun to bring them up here and do well with them. You want them to sell well, but the most important thing is that you want them to go on and run. So it's been really fun to watch him become a graded stakes winner. The hype surrounding him has been fun to watch and I think there's more to come.”

While Stone Farm is certainly no stranger to success at the Saratoga Sale, the family behind the legendary surname has been connected with the Fasig-Tipton auction since its inception.

“My great-great-grandfather, Captain Richard Hancock, sold up here in the very early days of Fasig-Tipton,” Hancock noted. “It's been exciting to be up here at the 100th sale as the fifth generation of Hancocks. Everyone was like, 'Oh, your dad left you to do it yourself,' and I told them he may have misguided faith in me, but it worked out okay.”

When she's not running a sales consignment, Hancock stays busy working alongside her father as Stone Farm's Director of Sales and Racing.

“People ask me what I do on a daily basis a lot and it is kind of ever-changing,” she said. “I look at the horses and I technically do our racing, bloodstock and sales, but a lot of it is just whatever my dad tells me to do. I call him my father boss and what he says, I do.”

While the light-hearted, teasing side of Hancock's relationship with her father is evident, she is also clearly appreciative of the wisdom the renowned horseman has to offer.

“My dad went out on his own and started Stone Farm and it's something that we're all really passionate about because he built it,” she said. “One thing I respect a huge amount about my dad is that he'll tell you what he thinks and he's not afraid to shy away. People might not agree, but he's always going to do what he thinks it the right thing. He always says that all you can do in life is the next best thing.”

She continued, “We're all very proud of him and the work that he has put into a lot of different fronts to better the industry. I think that's what we all want to do is to see the industry continue to grow, try to get young people involved and continue to have the horse racing we all love.” 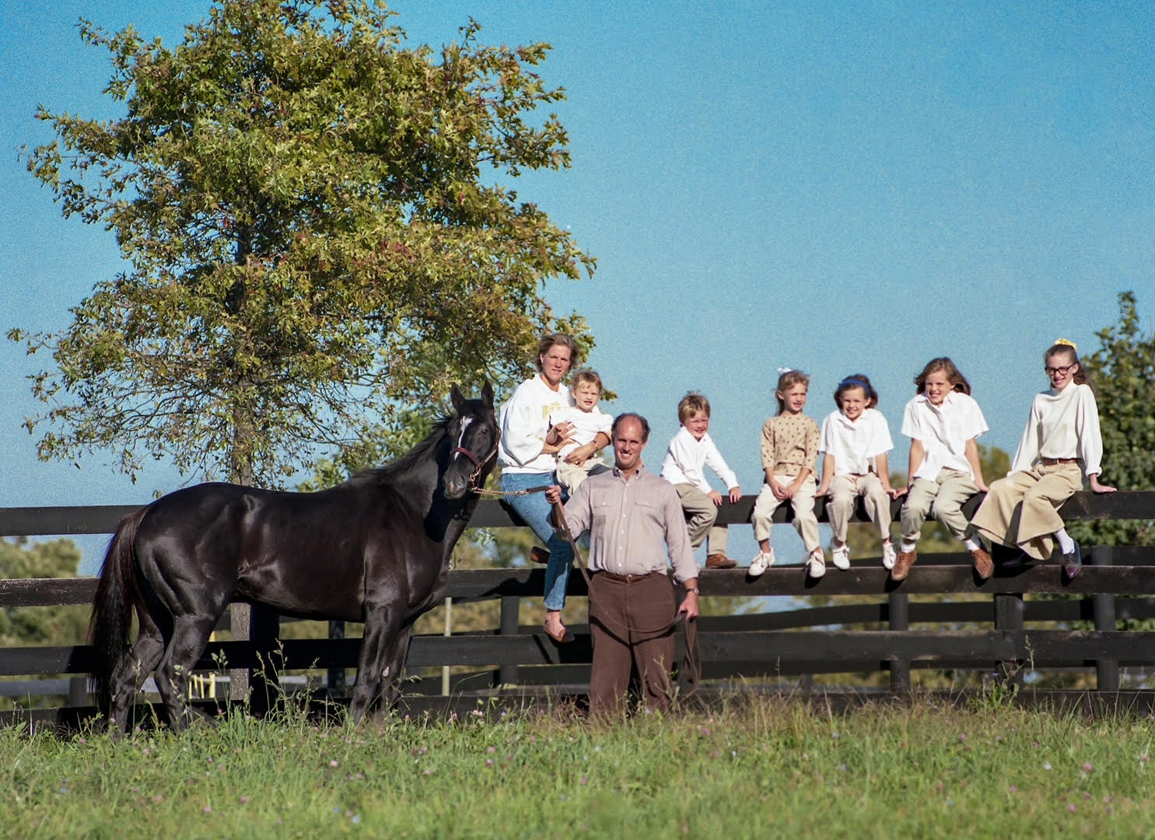 The Hancock family with Horse of the Year Sunday Silence. | Tony Leonard

Growing up on Stone Farm's stunning acreage in Bourbon County, Hancock and her five elder siblings developed an appreciation for their land and a respect for their horses early on from parents Arthur and Staci.

“It was so much fun growing up on the farm and it was always a little bit of a zoo,” she admitted. “But I think we all have a really strong place association with the farm. Another thing my dad always says is that we're farmers and the product that we grow is Thoroughbred horses. We all love the farm and want to see it thrive and continue to produce runners.”

“I love working with my family,” Hancock said. “My dad and I work well together and my mom is very involved with the farm. My sister Alex just had a baby so she's on a hiatus, but she works at the farm and all of my siblings are very involved and interested. I send out alerts so everybody knows what's happening with the horses that come off the farm-not just the ones that we breed and raise, but horses like the Dame Dorothy colt. It's exciting for everybody.”

Lynn Hancock was just a few years old during Sunday Silence's dominating 3-year-old campaign in 1989, but nevertheless, the six-time Grade I-winning son of Halo co-owned by her father is still one of her all-time favorites.

“Sunday Silence was kind of our banner horse and really solidified the future of the farm,” she said. “There's a picture of us kids lined up with him and his story is just amazing. I was two years old so I don't remember, but to go back and watch that Preakness race with Sunday Silence and Easy Goer, that was something that kind of hooked me into the industry and into wanting to do this.”

While Arthur Hancock continues to gradually dole out responsibilities to the next generation of leaders at Stone Farm, his youngest daughter hopes to build on the firm foundation he has already constructed for their farm.

“We're very lucky to have good land, good water and good clients,” she said. “We have large pastures and that has built into how we raise the horses in letting them be horses and develop into the best versions of themselves they can be. We just hope to keep Dad's legacy going. He has had so much success, especially in the '80s and '90s in the early days, that I want to get some graded stakes winners for us too.”