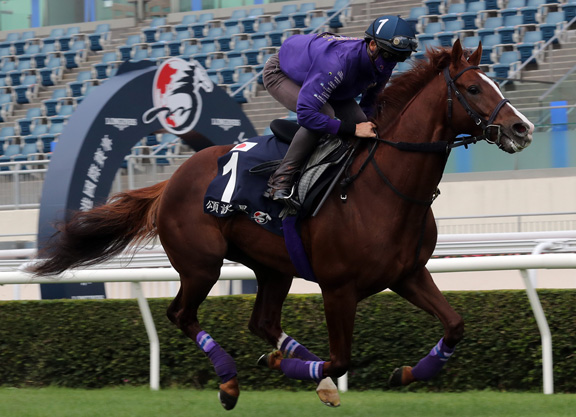 One of the more anticipated mornings leading up to the Longines Hong Kong International Races comes midweek, when the horses representing Japan are allowed to flex their muscle. Four of the six runners that will fly the Japanese flag in three of Sunday's four races did just that Wednesday morning at Sha Tin.

Japan fields three of the eight entrants for the G1 Longines Hong Kong Cup, a race won by its team in three of the last five years. Danon Premium (Jpn) (Deep Impact {Jpn}) will try to give his sire a second Cup winner (A Shin Hikari {Jpn}, 2015) and was more focused than he was Tuesday with his blinkers on, as he clicked off a final 400 metres in :23.7. He exits a pacesetting fourth to Almond Eye (Jpn) (Lord Kanaloa {Jpn}) in the G1 Tenno Sho (Autumn) at Tokyo Nov. 1.

Normcore (Jpn) (Harbinger {GB}) makes her second visit to Sha Tin, having finished a sound fourth to her compatriot Admire Mars (Jpn) (Daiwa Major {Jpn}) in last year's G1 Hong Kong Mile. She is up in trip for the Cup and breezed home in :21.7 Wednesday, while getting a reminder or two to keep her mind on business.

The aforementioned Admire Mars is back to defend his title in the Mile and will need to bring his very best facing the likes of local favourite Golden Sixty (Aus) (Medaglia d'Oro) this weekend. The blaze-faced chestnut, a good third to superstar filly Gran Alegria (Jpn) (Deep Impact {Jpn}) in the G1 Mile Championship at Hanshin Nov. 22, galloped on his incorrect lead in his work Wednesday, but picked up speed once switching over and was home in :22 flat. Christophe Soumillion will emerge from quarantine later this week and has the call in the Mile.

Danon Smash (Jpn), a son of two-time G1 Hong Kong Sprint hero Lord Kanaloa (Jpn) and eighth in last year's Sprint, was most recently second to Gran Alegria in the G1 Sprinters' S. Oct. 4. With Ryan Moore in the saddle, the 5-year-old finished off 800 metres of work in :22.2.