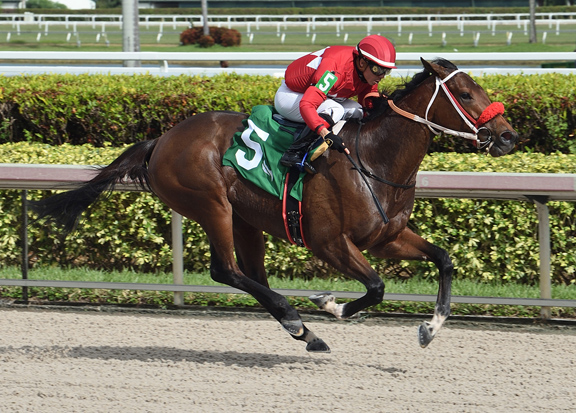 Letruska (Super Saver) made it a perfect three-for-three in front-running fashion over the Gulfstream Park main track in Saturday's GIII Rampart S.

Racing without blinkers for the first time, the pride of Mexico shot out to the front and held a narrow advantage through an opening quarter in :23.92. Emisael Jaramillo hit the gas on the far turn and Letruska responded, kicking for home in control. She increased her advantage to the wire in a sharp performance.

Letruska began her career with six straight victories in Mexico, including a pair of Group 1 tallies. She was tabbed as the country's champion 3-year-old filly of 2019.

The bay's U.S. campaign has so far included victories in Gulfstream's Copa Invitacional del Caribe S. last December and the Added Elegance S. in late June; an optional claiming tally at Oaklawn in the spring; and a win in Saratoga's GIII Shuvee S. Aug. 30. She was last seen tiring to a well-beaten last of four in Belmont's GI Beldame Invitational S. Oct. 4.

“I had a big question mark about today, because after her last race in New York, I decided to remove the blinkers,” winning trainer Fausto Gutierrez said. “I came to the conclusion that all the time she runs she never saw the other horses. It's important how she responds when she feels the competition near her. It was a very good performance.”

As for what's next, he added, “We'll stay here and we'll decide what's possible. I think we'll stretch her out next time.”

Winner of the GI Kentucky Derby a decade ago, Super Saver now has seven crops of racing age with 27 black-type winners. He stood the 2020 season in Turkey. While Eclipse champion Runhappy is the most well-known of Super Saver's 12 graded winners, Letruska has taken the road less traveled to graded status, having started her career as an undefeated six-time winner in Mexico and being named champion 3-year-old filly in that country last year. Super Saver also had this fall's GI Jockey Club Gold Cup winner in Happy Saver. Letruska hails from an active female family: her dam is a full-sister to GISW J P's Gusto and a half-sister to the dam of dual Canadian champion Miss Mischief (Into Mischief), as well as a part of the immediate family of Eclipse champion and MGISW Proud Spell (Proud Citizen). In additional to Letruska, Magic Appeal also produced MSW & GISP Trigger Warning (Candy Ride {Arg}) and additional SP American Doll (Tiznow). The daughter of Successful Appeal–whose 24 stakes winners out of his daughters include GI Belmont S. winner Tapwrit (Tapit)–had colts by Hard Spun and Arrogate the last two years before visiting the court of Malibu Moon for next term.