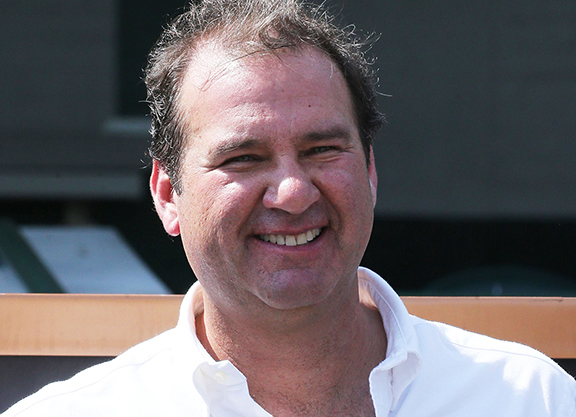 Fausto Gutierrez is not well known in U.S. racing circles and neither is his owner, St. George Stable. That may be about to change.

Mexico's dominant trainer and owner have set up a U.S. division based at the Palm Meadows training center and, after a handful of starts in 2019, are ready for what they hope will be a successful 2020 season. It starts Saturday at Fair Grounds, where the star of the barn, Kukulkan (Mex) (Point Determined) will go in the GIII Louisiana S. and the well-bred first-time starter Maddox (Into Mischief) will face eight others in a maiden special weight.

Gutierrez has been among the biggest winners in the Clasico Del Caribe series, which has been run at Gulfstream since 2017 and is restricted to horses from a handful of Latin American and Caribbean countries. After the 2018 event, Gutierrez returned to Mexico, but kept Kukulkan in the U.S. After winning two more Clasico Del Caribe races in December, he took the next step, establishing a Florida base with 15 horses.

He doesn't know quite what to expect.

Much of his future success will depend on his owner and how committed he is to winning in America. St. George is owned by German Larrea. Larrea is the majority owner of Mexico's largest copper mining company and is, according to Forbes, worth $16.3 billion, making him the second richest person in Mexico. Because Larrea shies away from the spotlight, a lot is not known about him. However, he clearly likes racing.

According to Gutierrez, St. George has about 120 horses in Mexico and has had as many as 160 at times. He said that about 30% of all Thoroughbreds born each year in Mexico are bred by Larrea. Prior to 2019, Larrea had had a small presence in U.S. racing, campaigning a few horses with trainer Efran Loza Jr.

“He has been my main owner for the last 15 years and he has had horses here,” Gutierrez said. “About a year ago, he said he wanted to move some horses here to try to win in the U.S.”

While Gutierrez says he's still not sure where his horses fit in the U.S., Kukulkan has given him some answers. Among the best horse ever to race in Mexico, he was 13 for 13 there and won Mexico's Triple Crown. Since coming to the U.S. he has won two Clasico Del Caribe races and shown that he can be effective at the Grade III level. His best performances have come in an allowance race at Churchill and a second-place finish in the GIII West Virginia Governor's S. at Mountaineer.

“After his last start versus the Carribean horses, he looks strong and I think the race for him Saturday is the right level where he belongs,” Gutierrez said. “I think this is a good race for him. I think he is one of the best horses to come out of Mexico, but he was racing at a very different level from what they have in the United States.”

Another horse he feels can win here is Letruska (Super Saver). She was undefeated in six starts in Mexico before winning a Clasico Del Caribe race. She ran poorly in her next start, finishing 13th in the Tropical Park Oaks. That was her grass debut and Gutierrez blamed himself for the defeat, saying he never should have run her on the turf.

Many of the horses in his U.S. division are 3-year-olds that have not started yet. That includes the filly Maddox. She was bred in Kentucky by St. George Stable and is by a potent sire in Into Mischief.

“She is a good filly and has a nice pedigree,” Gutierrez said.

This is Gutierrez's second stint in the U.S. The racetrack in Mexico City, Hipodromo de las Americas, was closed for three years starting in 1996, before the trainer had gone to work for Larrea. With no place else to go, he wound up on the Texas circuit, winning 20 races between 1998 and 1999.

Though the purses are small in Mexico (Kukulkan made only $10,146 when winning the Derby Mexicano), Gutierrez said that his owner enjoys racing there and does not see him cutting back on his numbers. That means he will not have a massive stable in the U.S. any time soon, but Gutierrez said he wouldn't be surprised if Larrea eventually built the U.S. string to about 50 horses.

“We have won all the big races in Mexico,” he said. “Here, I hope to have a chance to be competitive.”