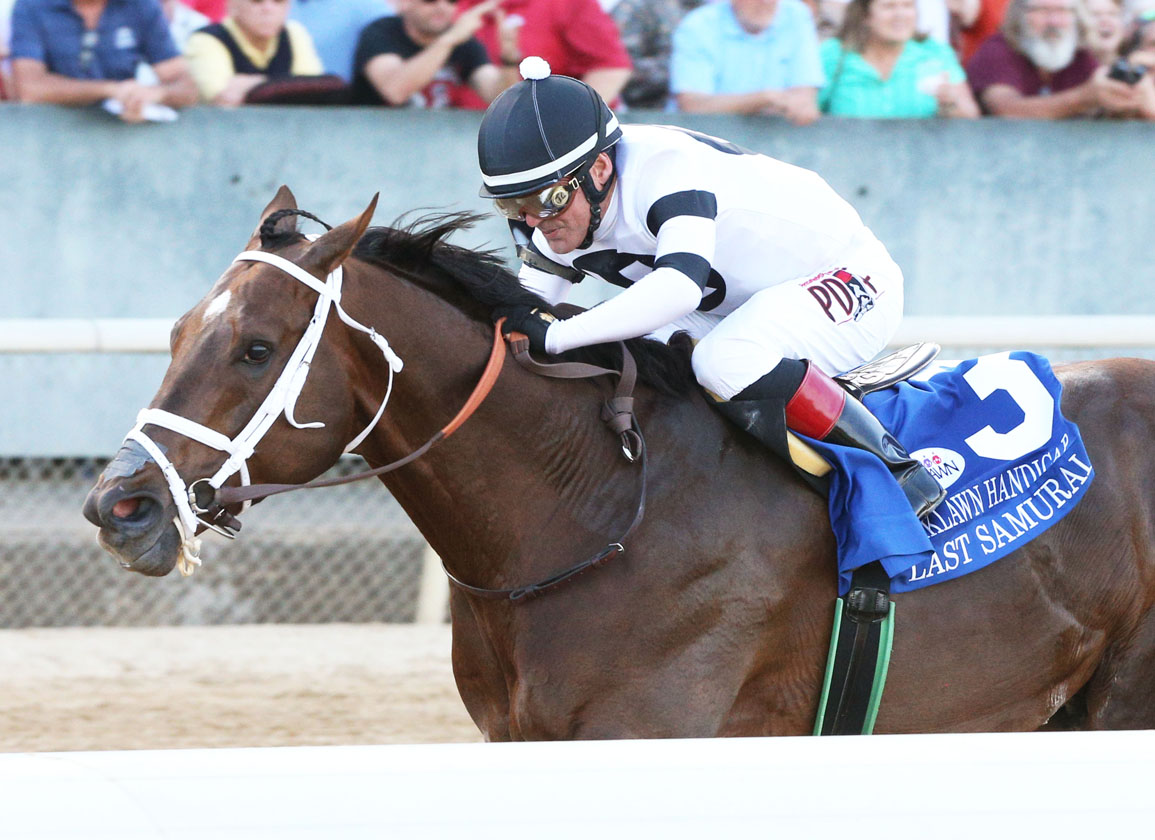 Arkansas' own Willis Horton celebrated yet another big-race success right in his backyard, as Last Samurai (Malibu Moon) re-rallied at the fence beneath veteran reinsman Jon Court and ran away late to cause a 12-1 upset in Saturday's $1-million GII Oaklawn H.

Drawn two in a field reduced to seven by the early scratching of Thomas Shelby (Curlin), Last Samurai had good speed from the inside and shared the lead with second choice Plainsman (Flatter) under the wire for the first time, as favored Fearless (Ghostzapper)–runner-up to the Horton part-owned Silver State (Hard Spun) last year–tracked the duo from out wide. Court, still thriving at the age of 61, took Last Samurai in hand as they turned up the backstretch, allowing Plainsman to edge to the front, but held his spot at the fence as the field reached the half-mile peg. Last Samurai appeared to be struggling three-eighths of a mile out, but–busily ridden by Court–was back into the bridle and on the attack inside of Plainsman, Fearless and 2021 GI Arkansas Derby hero Super Stock (Super Saver) on the swing for home. Vigorously ridden, Last Samurai began to get away at the furlong grounds and was punched out to score impressively. Fearless was up on the line to touch Plainsman out of second.

“He's been training really well,” said Court. “He's been fun to work with from the time the Hortons gave me the opportunity to work with Last Samurai. He's just been a joy in the mornings. As you may have noticed, I broke away from the pony because he's just so fun to ride in the morning. In the afternoon, he gives it his best effort and things set up perfectly for us and he was willing to take on the challenge. What a blast it certainly was.”

Fifth in last year's GIII Southwest S. and in the Arkansas Derby, Last Samurai took a Colonial turf allowance in August, but was only ninth in the Dueling Grounds Derby at Kentucky Downs the following month. The chestnut, a neck second facing his elders in the GIII Greenwood Cup over 12 furlongs Sept. 25, bested Super Stock in the Dec. 11 Poinsettia S. at this venue, but was seventh to Plainsman in the GIII Razorback H. Feb. 12 and a latest near-miss second to marathoner Lone Rock (Majestic Warrior) in this track's Temperence Hill S. going a mile and a half Apr. 3.

Already one of 129 worldwide black-type winners for the late Malibu Moon, Last Samurai becomes the 52nd to succeed at the graded or group level and is his 20th male to do so.

A stakes winner and third in the GII Molly Pitcher S., Lady Samuri was sold for $130,000 at the 2013 Keeneland November Sale, then was knocked down to Stonestreet for $280,000 in foal to Union Rags at KEENOV the following fall. The mare is the dam of four winners from as many to the races, a number that also includes Candy Raid (Candy Ride {Arg}), who upset the Apr. 2 Bourbonette Oaks and worked Saturday towards an expected appearance in the GI Longines Kentucky Oaks May 6 (see related story).