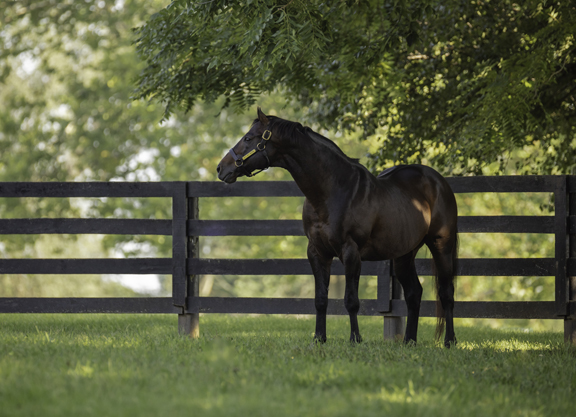 Spendthrift Farm's foundation stallion Malibu Moon (A.P. Indy–Macoumba, by Mr. Prospector) passed away Tuesday in his paddock at the Lexington farm he has called home for the past 13 years. The 24-year-old, who was still in active stud duty, died of an apparent heart attack.

“It's a sad day for us. This is our first loss of this kind. It's tough,” said Spendthrift owner & president, Eric Gustavson. “You really develop a love for these beautiful, majestic animals. Even with Into Mischief taking over the mantle as 'top stallion' at the farm, Malibu Moon has always been 'the man' among our stallions. It can't be overstated how important he has been to the development of our farm. To say he will be missed just doesn't cover it. It's hard to imagine Spendthrift Farm without Malibu Moon.”

Bred and raced by Spendthrift owner B. Wayne Hughes, Malibu Moon made just two starts as a juvenile for trainer Melvin Stute. Second on debut at the now defunct Hollywood Park in April of 1999, he rallied to an impressive victory going five panels at that oval a month later and was subsequently retired.

Malibu Moon began his stallion career the following year at the Pons family's Country Life Farm in Maryland for an introductory fee of $3,000. In 2004, he was relocated to Castleton Lyons as property of that operation, Hughes and Country Life and his fee was increased to $10,000. Thanks to the exploits of his son Declan's Moon, who was named champion juvenile colt in 2004, Malibu Moon's fee was increased to $30,000 in 2005 and $40,000 in 2007. In 2008, Hughes brought Malibu Moon home to Spendthrift, which he had just finished renovating and he was the farm's kingpin stallion until the meteoric rise of Into Mischief. The son of G1SW Macoumba stood the 2021 season, his 22nd season at stud, for $35,000.

“Malibu Moon did so many things for so many people,” said Ned Toffey, Spendthrift general manager. “Our partners, Castleton Lyons and the Pons family, were so instrumental in helping develop his career and he rewarded them, and us, handsomely for it. He has truly been the horse of a lifetime.”

Malibu Moon is currently responsible for 126 black-type winners and 51 graded winners, 17 of which were Grade I scorers. His progeny excelled at a variety of distances and surfaces. In addition to his Eclipse winner Declan's Moon, some of the stallion's other standout runners include GI Kentucky Derby hero Orb; dual Grade I winner and fellow Spendthrift stallion Gormley; three-time Grade I scorer Devil May Care; and MGISW Moonshine Memories.

“Malibu Moon–'Boo Boo' to me–will be sadly missed by all of us at Spendthrift. Personally, the 18 years I had the pleasure to care and work with Malibu Moon have been a journey I believe we both enjoyed immensely. He was most definitely the boss, I just followed his lead,” said Spendthrift stallion manager Wayne Howard, who moved to Spendthrift from Castleton Lyon with Malibu Moon.

Gormley is one of three sons of Malibu Moon currently standing in Kentucky. SW & MGISP Mr. Z and two-time Grade I-winning sprinter Ransom the Moon are both located at Calumet Farm. Orb started his stallion career at Claiborne, but was recently relocated to South America. However, Orb was represented by a Derby runner this year in fifth-place finisher O Besos.

Malibu Moon is also the broodmare sire of horses such as champion Stellar Wind and Grade I winners Girvin, By the Moon, Bellafina and recent Preakness-G1 runner-up Midnight Bourbon.