Lady Eli Up in Time to Capture Diana 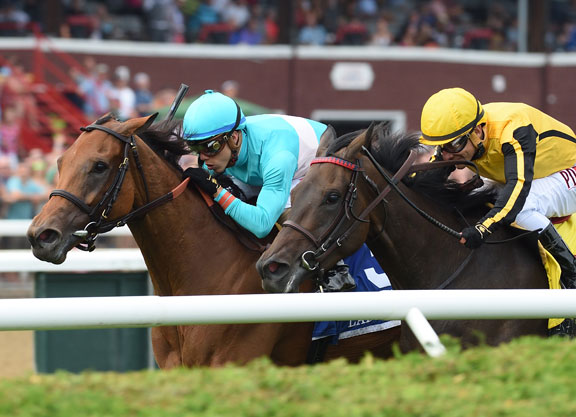 The undisputed darling of the American turf, Lady Eli was back to her tenacious best in Saturday's Diana S.–the first of 17 Grade Is on the flat at Saratoga this summer–as she looked pacesetting Quidura in the eye with about 40 yards to race, pinned her ears and stuck her head across the wire first.

The start of the Diana was delayed by a few minutes when Antonoe broke through gate two and jogged off some beneath Javier Castellano, while Lady Eli, drawn right to her stablemate's outside, pushed open her stall, but was held onto by her gate attendant. Once reloaded, Quidura jumped best of all and was kept company by Dickinson (Medaglia d'Oro), while Antonoe box-seated from third. Lady Eli raced in fifth in the wake of the Juddmonte runner and the pace up front was honest enough. Guided out into the clear down the backstretch, Lady Eli was patiently handled by her regular rider Irad Ortiz, Jr., but Quidura was enjoying a reasonably easy time of it on the engine through a half-mile in :47.51. With Antonoe, so impressive in winning the GI Just A Game S. last time, committed to an inside run and hoping for the gaps to come, Lady Eli went for an overland passage as the two chief protagonists made their moves simultaneously nearing the entrance to the stretch. Four wide at the top of the lane, Lady Eli kicked hard and was more or less on even terms with Quidura at the eighth pole. The German-owned runner was in for the fight as the two raced in lockstep for most of the final furlong, but Lady Eli proved the slightly more determined competitor on the day. Antonoe had her chances up the fence, but did not quicken the same way she did last time and was checked short of room in deep stretch. The stewards looked into the incident, but the result was allowed to stand. Lady Eli gave Quidura eight pounds and covered an additional 23 feet per Trakus.

“Today was one of her greatest races to date, maybe her best,” said trainer Chad Brown, winning the Diana for the second year in a row and third time overall. “Giving eight pounds to the horse she ran down late in the stretch after breaking through the gate, going a little wide, she just overcame everything. Today she proved she's one of the all-time greats. It was her determination. Proud she didn't hang there in the end. She's always drove past another horse as long as she can see them. She might have been undefeated, three times she's gotten beat late in the stretch from behind. That said, I think she's one of the all-time greats.”

Winner of the GI Breeders' Cup Juvenile Fillies Turf at two and the GI Belmont Oaks at three, Lady Eli bravely fought a winning battle with laminitis, soothing any pain there may have been when she suffered her first career defeat in the GII Ballston Spa S. last August. Victorious in the GI Flower Bowl S. in her next appearance, she called it a season after a near-miss second in the GI Breeders' Cup Filly & Mare Turf in November. Caught on the wire by Dickinson in Keeneland's GI Jenny Wiley S. on seasonal debut Apr. 15, she made it Grade I wins in four straight seasons, racing handy to a swift pace before taking the GI Gamely S. by a half-length May 27.

Pedigree Notes:
A half-sister to this breeder's MGSW Bizzy Caroline (Afleet Alex), Lady Eli is also a half-sister to the unplaced 3-year-old colt Electro (Ghostzapper), a $400,000 Keeneland September yearling acquisition by Juddmonte Farms. Sacre Coeur, a Catesby Clay homebred and winner of a grassy maiden special weight at Aqueduct from three career starts, did not produce foals in either 2015 or 2016, but is represented by a filly from the first crop of Triple Crown winner and Horse of the Year American Pharoah (Pioneerof the Nile). Lady Eli's second dam Kazadancoa (Fr) was purchased by Clay for $30,000 at the 1989 KEEJAN Sale. Her female family includes 1995 GI Kentucky Derby runner-up Tejano Run and the Nureyev sire Alwuhush. Divine Park was exported to Korea and covered 55 mares in his first year at stud in that country in 2016.