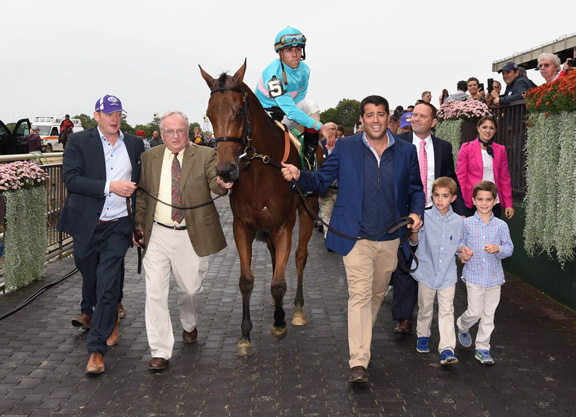 A standing ovation at Belmont Park? Sure, nothing new there. But this one wasn’t for the first Triple Crown winner in 37 years.

The diminutive but adoring ‘Super Saturday’ crowd had every reason to get on its feet to applaud Lady Eli (Divine Park)’s triumphant return to the winner’s circle following the GI Flower Bowl S. Oct. 8. Already a fan favorite after beginning her career with six straight electrifying wins, including the 2014 GI Breeders’ Cup Juvenile Fillies Turf, she made even bigger headlines after successfully overcoming a well-documented battle with laminitis following her victory in the 2015 GI Belmont Oaks Invitational. Lady Eli will line up next as the likely favorite in Saturday’s GI Breeders’ Cup Filly & Mare Turf at Santa Anita.

“It just about brought me to tears walking the horse back to the winner’s circle with my father next to me and Sol [Kumin] and his two boys on the other side,” said Jay Hanley, principal of the Nantucket, Massachusetts-based Hanley Construction & Development, who, along with Kumin and two silent partners, operate as Sheep Pond Partners. “It was just a flood of emotions, and to look up and to see that [ovation], it was just overwhelming. Such appreciation. We’ve received letters from breast cancer survivors and the people that this horse has inspired to fight disease and to come back from a place where they feel down or beaten–she’s a horse for the fans and for the people. We are both super thankful to the horse, to [trainer] Chad [Brown] and [assistant trainer] Cherie [DeVaux], [podiatrist] Bryan Fraley and all the folks who have touched her and for seeing her through this.”

Kumin added, “She has such a huge following and obviously what she’s done has been very special. It’s just amazing to see that people notice it and care so much. I couldn’t be more excited or happier for her to be back.”

It was a much different scene the previous time these connections celebrated a big victory by their star filly at Belmont Park. Shortly after getting her picture taken in the Belmont Oaks, Lady Eli stepped on a nail on her way walking back to Brown’s barn. Days later, she developed the aforementioned life-threatening hoof disease in both of her front feet.

“It’s almost overwhelming to think about it going back from the start,” Hanley reflected. “We were the highest of highs. It couldn’t get any higher. We had what we thought was going to be an undefeated filly at the end of her 3-year-old year–she would’ve run the table was our thought right on through and been 9-for-9. We didn’t immediately think the worst. It wasn’t until a couple of days later that we understood it to be the worst and we didn’t really know how to react. It’s kind of like when a family member gets really sick.”

But Lady Eli wasn’t going out without a fight. She made remarkable progress by the fall and was already back jogging in December. The well-built dark bay returned to the worktab in late February, including a pair of four-furlong breezes, but was given some more time after “there were some things Chad didn’t like,” said Kumin, following her fourth breeze at Palm Meadows Mar. 21. Brown began to tighten the screws once more in early July and she returned from nearly a 14-month absence to finish a valiant second after briefly leading in the stretch–her first career defeat–in a race featuring a blistering early pace in the GII Ballston Spa S. at Saratoga Aug. 27. If there were any doubts whether Lady Eli could compete at that same upper echelon level, despite posting a previous career-high Beyer Speed Figure of 101 that day, they were quickly erased with a sensational victory in the Flower Bowl, once again showcasing her exceptional turn of foot in the stretch.

“We really felt like she didn’t get to finish what she started,” said Kumin, CEO and founder of Folger Hill Asset Management. “When it all happened, you really go through every emotion. First, of course, just worried for her health and safety. Then you go from, is she going to be okay? To, is she ever going to run again? To, is she ever going to be elite again? We always held out hope. And that little bit of doubt of, is she ever going to come back to that elite place? I think she showed us and everybody else that she has and it makes her even more special and really is a testament to how tough she is.”

And to think that it all began on just a single bid of $160,000 by Hanley for the daughter of the winning Saint Ballado mare Sacre Coeur at the 2014 Keeneland April 2-Year-Olds in Training Sale. What stood out about Lady Eli–a half-sister to multiple graded winner Bizzy Caroline (Afleet Alex) bred in Kentucky by Runnymede Farm Inc and Catesby W. Clay–at the time?

“This goes back to Pete Bradley and Eddie Woods–they bought her as a yearling [$160,000 KEESEP] and saw something in her physicality,” Hanley responded. “I had my notes on the breezes–she had a standout breeze–and Chad [Brown] came to me and said, ‘Hey, look at these three or four horses.’ She happened to be one of the first ones we looked at. As a 2-year-old filly in April, she looked like a 3-year-old colt. She just looked powerful. That, combined with the breeze and after talking with Chad about it, gave me the confidence to go ahead and bid.”

Sheep Pond has certainly hit the ground running since its inception in 2014, also campaigning the likes of fellow Grade I winners Beach Patrol (Lemon Drop Kid), Dacita (Chi) (Scat Daddy), Slumber (GB) (Cacique {Ire}) and Wake Forest (Ger) (Sir Percy {GB}), as well as this year’s GI Blue Grass S. runner-up and GI Kentucky Derby starter My Man Sam (Trappe Shot). Kumin, who has since launched three other partnership groups, including Head of Plains, has also been represented by GI Breeders’ Cup Filly and Mare Sprint victress Wavell Avenue (Harlington), GI Preakness S. winner Exaggerator (Curlin), and Grade/Group 1 winners Sharla Rae (Afleet Alex) and Undrafted (Purim). Kumin said that he has interests in a total of nine pre-entries for the upcoming two-day Championships, but is quick to acknowledge where it all started from.

“This was the horse that really got us into this sport,” said Kumin, who was recognized as New Owner of the Year by OwnerView in January. “When we think about how big horse racing is as a part of both of our lives–in terms of what we think about, where we spend our free time, where we bring our kids, our wives, our parents, etc–before Lady Eli, it was a pretty small piece. Even smaller for me than Jay. She’s the one that gave us the bug.”

But could the ride be coming to an end? Lady Eli is consigned at Keeneland November as Hip 466 as a racing/broodmare prospect by Hill ‘n’ Dale Sales Agency four days after she takes on an international cast at the Breeders’ Cup.

“After the Breeders’ Cup, Jay, Chad and I will talk about what we think is best for her and then make a decision,” Kumin concluded. “We’re primarily a racing program and you’ve got to recycle dollars into it to be able to continue to race at a high level. We’re not sure if we’ll sell her this year–we put her in the sale because we always want to have our options open. We will sell her [eventually], but we’re under no pressure or time to do it.”