Lady Eli Back on Top in Gamely 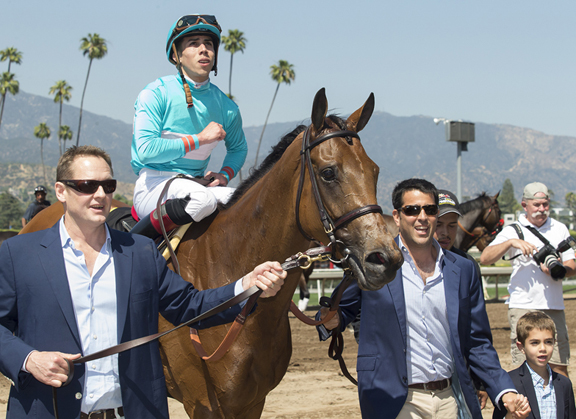 Lady Eli (Divine Park)'s feel good story continued with an ultra- game half-length victory over Goodyearforroses (Ire) (Azamour {Ire}) in Santa Anita's GI Gamely S. The stretch-runner was taken out of her element by Irad Ortiz Jr. in the early stages and didn't let second choice Avenge (War Front) out of her sight through fractions of :23.23 and :46.46. Lady Eli wrestled command from the pacesetter on the far turn, took off at the top of the lane and dug down deep in the stretch when challenged by Goodyearforroses to deliver as the 3-5 favorite.

“Chad [Brown] had spoken to Irad and told him about getting her in the clear,” assistant trainer Cherie DeVaux said. “He didn't want him to take too much hold of her because he didn't want her to have too much to do. He was concerned about Avenge getting an easy lead. Because of everything she's been through, it's way more emotional when she runs. Her tenacity is what makes her great. The [GI] Breeders' Cup [Filly & Mare Turf Nov. 4 at Del Mar] is the ultimate objective.”

Winner of the 2014 GI Breeders' Cup Juvenile Fillies Turf and a painful narrow runner-up in the 2016 GI Breeders' Cup Filly & Mare Turf in her prior two trips to Santa Anita, Lady Eli faced the starter three times in 2016, including an emotional win in Belmont's GI Flower Bowl Invitational S., after making a miraculous comeback overcoming a well-documented battle with laminitis.

“It feels good, this is a special horse,” winning co-owner Sol Kumin commented. “She's got us super hooked on this sport and she's been through so much. I can't say enough about Chad Brown and his assistant Cherie. This is all thanks to them. It's been such a journey.”

Co-owner Jay Hanley added, “The fact that she can come back and do this… it's amazing, it's absolutely amazing. All we can do as owners is try to be good stewards and that's our job. We try to make good decisions, but for the most part we just try to put our faith in Chad and his team.”

A half-sister to this breeder's MGSW Bizzy Caroline (Afleet Alex), Lady Eli is also a half-sister to the unplaced 3-year-old colt Electro (Ghostzapper), a $400,000 Keeneland September yearling acquisition by Juddmonte Farms. Sacre Coeur, a Catesby Clay homebred and winner of a grassy maiden special weight at Aqueduct from three career starts, did not produce foals in either 2015 or 2016, but is represented by a filly from the first crop of Triple Crown winner and Horse of the Year American Pharoah (Pioneerof the Nile). Lady Eli's second dam Kazadancoa (Fr) was purchased by Clay for $30,000 at the 1989 KEEJAN Sale. Lady Eli's female family includes 1995 GI Kentucky Derby runner-up Tejano Run and the Nureyev sire Alwuhush.