Lacy Named VP of Sales at Keeneland; Russell To Retire 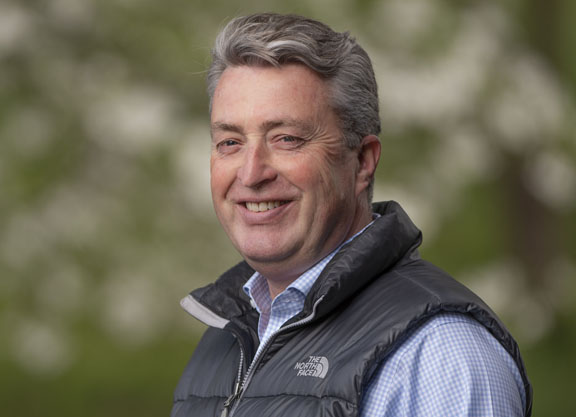 Internationally respected bloodstock adviser and consignor Tony Lacy will join Keeneland as the company's vice president of sales. Keeneland has simultaneously announced that Geoffrey Russell, who has served the auction house for 25 years–the last 20 as director of sales/sales operations–is retiring from the company, but will remain as a consultant through 2021.

“Tony possesses a well-rounded knowledge of the Thoroughbred industry, bolstered by valuable insight and a unique skill set gained from having worked on the ground in the U.S., Europe and the Middle East,” Keeneland President and CEO Shannon Arvin said. “He is an established presence globally and connects to a vast network of owners, trainers, consignors and buyers. We are excited to welcome Tony to Keeneland, and look forward to his leadership as we prepare for the future.”

A fourth-generation horseman, Lacy began his career as an assistant trainer to his father T.F. 'Tom' Lacy, a steeplechase jockey who nearly defeated Arkle in the 1964 Irish Grand National. Tony Lacy was an accomplished amateur jockey in Ireland for 11 years on the flat and over jumps while competing against the likes of Aidan O'Brien and Willie Mullins.

In 2001, Lacy helped establish the Four Star Sales consignment along with Kerry Cauthen, eventually becoming a partner and helping the company become one of North America's leading sales agencies.

“Since the inception of Four Star, Tony has always been far more than just a partner,” Cauthen said. “Though his daily presence will be sorely missed by us all, we are tremendously excited for him and all the great things he will bring to Keeneland in this very important industry role. We look forward to a continued long-working relationship together.”

Lacy has also managed a number of breeding and racing programs and most recently aided owner Scott Heider, breeder of GI Kentucky Derby hopeful King Fury (Curlin), in building a boutique racing and breeding operation. Lacy has also counseled and represented Emirates Racing and the Dubai World Cup in the U.S. He has also advised the French racing industry's marketing arm, French Breeding and Racing Committee (FRBC) as well as France Galop.

Lacy is the incoming president of the Thoroughbred Club of America and will be the first foreign-born president in the organization's 89-year history. He also serves on the Board of New Vocations.

“I am extremely honored to be named Vice President of Sales for Keeneland,” Lacy said. “Keeneland is a pillar of the global horse industry, and I have a high level of respect for Shannon, the team she is building and her vision for the future.

“I believe my background as a consignor and bloodstock adviser will allow me to understand the needs of our sales participants, continue to build on the best of our traditions and pursue innovations that will keep the company dynamic in a changing environment. Keeneland is an iconic brand, and we remain committed to protecting and growing its premier operations for the future health of the industry as a whole.”

Born in Ireland, Geoffrey Russell first attended the races when he was five years old, and later frequented the races with his best friend, whose family owned racehorses and taught Russell about pedigrees and other industry insights. While attending a bloodstock auction in the 1970, Russell watched as Sir Philip Payne-Gallway bought a full-sister to English Horse of the Year Shirley Heights (GB) for a then-record price in Ireland.

After graduation from the College of Marketing and Design in Dublin, Russell worked at Coolmore Stud in Ireland and as a bid spotter at Goffs. He came to the U.S. in 1982 on a summer internship at Fasig-Tipton, but admitted that he never expected to stay. Following a time at Elmendorf Farm, Russell accepted a position as the vice president of appraisals and director of sales administration at Fasig-Tipton.

“I think it chose me more than I chose it,” Russell said about his career in Thoroughbred sales. “I have a love of pedigrees, and I love horses. The atmosphere and the theatrics of an auction are captivating. Then you put your other hat on, and you see the sales are people's livelihoods and you realize how important your job is to do it right.”

Russell's service to the Thoroughbred sales industry includes two terms as Chairman of the Society of International Thoroughbred Auctioneers (SITA), and he has been Keeneland's representative on the North American International Catalogue Standards Committee (ICSC). He also serves on the board of the Grayson-Jockey Club Research Foundation.

“I have never met anyone more devoted to Keeneland or Thoroughbred racing than Geoffrey Russell,” Arvin said. “Keeneland sales achieved new heights globally under his watch, and he indelibly shaped the future of sales operations domestically and abroad through his years of leadership and service. I am grateful to Geoffrey for his integrity, his tireless work ethic and his dedication to Keeneland.”

Russell's friendship with Arvin began while she was Keeneland's counsel with Stoll Keenon Ogden and they worked together on Conditions of Sales and legal issues.

“It has been a great honor and privilege to work at Keeneland,” Russell said. “I appreciate all the opportunities that Keeneland has given me over my 25 years here. I never thought I would work at Keeneland–and never as Director of Sales nor being the longest-tenured one.

“With Shannon at the helm–and I firmly believe she is the right person to lead Keeneland–I feel that this is a good time for a transition as Keeneland looks to the next 20 years. Keeneland is putting the right people in place for the future, and the appointment of Tony as Vice President of Sales is an example of that foresight. Tony is a trusted and respected horseman, well-liked by his peers, who has conducted his racing and bloodstock career with quality and integrity. I am confident in Tony's leadership and look forward to the exciting future of Keeneland sales.”

Added Lacy: “I have admired Geoffrey from the first time I met him,” Lacy said. “He has always been very knowledgeable, decisive and fair in managing the sale process. He helped Keeneland navigate varying economic environments and his counsel will be heavily relied upon going forward. It is important to maintain the consistency Geoffrey has skillfully managed over the years to allow a smooth transition to the next Director of Sales Operations, and I am very grateful he will assist in this process. He has set a very high standard and I congratulate him on an incredible career.”

For his accomplishments in the Thoroughbred industry, the Irish Thoroughbred Breeders' Association (ITBA) honored Russell with its 2016 Wild Geese Award. ITBA Chairman Stephen Collins said the award acknowledges “one of our own who has flown the Irish flag with pride on an international stage.”