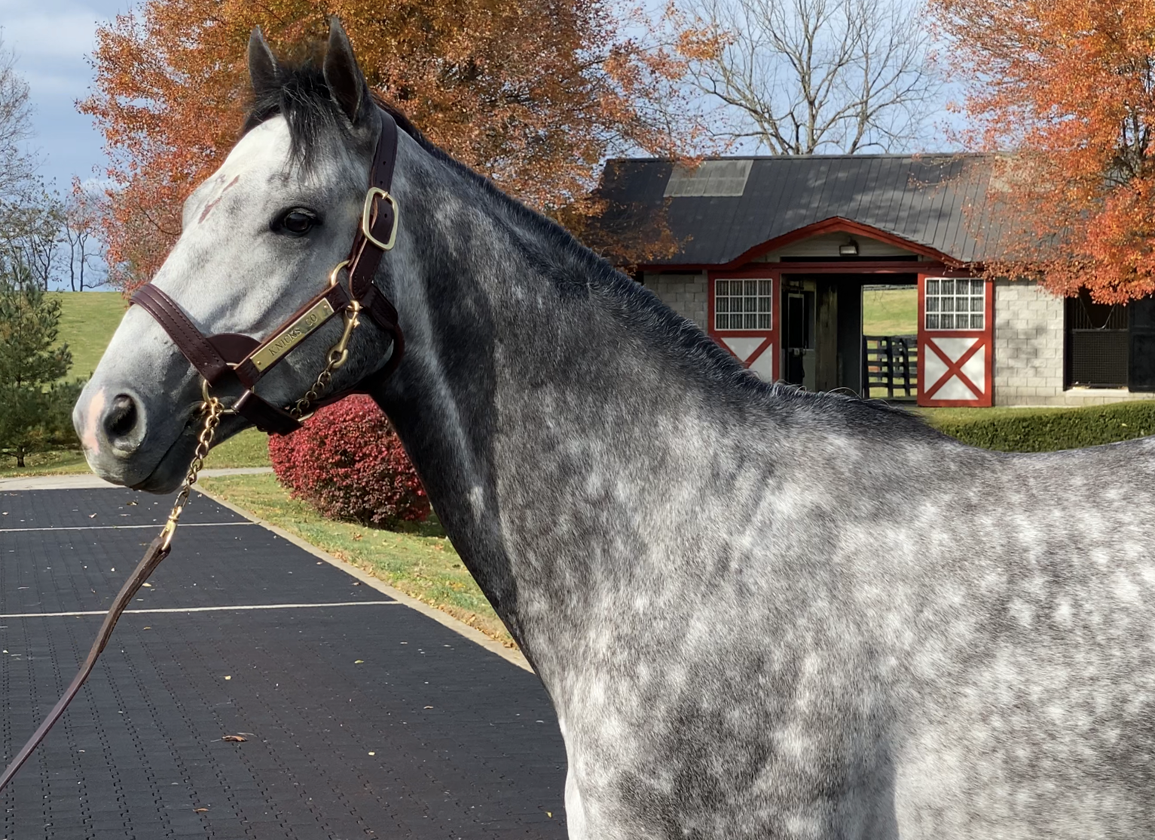 Knicks Go received a week-long hiatus from training this month at Taylor Made as breeders visited the two-time Breeders' Cup champion.

Following his emphatic triumph in the 2021 GI Breeders' Classic, champion Knicks Go (Paynter -Kosmo's Buddy, by Outflanker) enjoyed a brief interlude from training as he spent about a week at Taylor Made Farm, where he will soon begin his stud career, before he returned to the Brad Cox barn at Churchill Downs.

The colorbearer for the Korea Racing Authority cemented his status as the top older dirt male in the country with his gate-to-wire Classic victory. Now, the favorite for Horse of the Year honors is preparing for one last dance to defend his title in the GI Pegasus World Cup Invitational S. before he takes up stud duty in 2022.

Meanwhile, the team at Taylor Made is counting the days until they can welcome the famed grey back to their stallion facility.

Knicks Go was able to get an early taste of his future career during his short stay at Taylor Made as a steady stream of breeders dropped in to visit the new stallion.

“I think his conformation is definitely a plus,” Taylor said. “He reminds me a lot of Blushing Groom and Awesome Again. They're not overly big horses, but they're very well-balanced and have plenty of hip. I think those types of stallions cross well with a lot of different mares. He's very correct and he's one of those horses that have that look in their eye.”

The Taylor family is familiar with their new addition's sireline through their involvement with now-pensioned stallion Tiznow, whose female family is also responsible for Grade I-producing sires Paynter, Oxbow and Awesome Patriot. 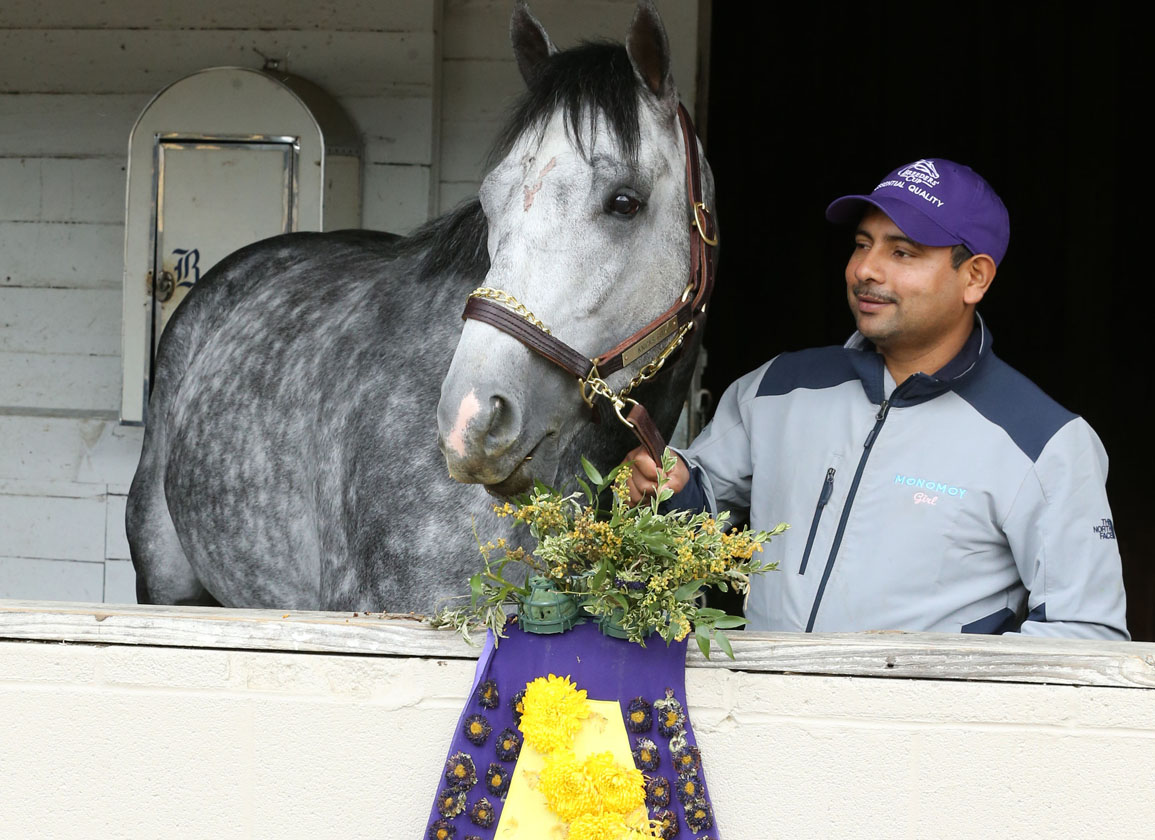 Knicks Go takes in the scenery upon his arrival at Churchill Downs on Nov. 17 | Coady

“If you look at this year's Breeders' Cup, you have [Filly and Mare Sprint contestant] Bella Sofia, who is by Awesome Patriot, [Classic contestant] Hot Rod Charlie by Oxbow and Knicks Go by Paynter,” Taylor explained. “So this sireline can get you a runner. We had Tiznow and everybody thought, 'A son of Cee's Tizzy. Why do you want him?' But he turned out to be a great stallion for us.”

Bred in Maryland by Angie Moore and daughter Sabrina Moore, Knicks Go is out of the stakes-winning mare Kosmo's Buddy (Outflanker). A debut winner at two, the colt went on to win the GI Claiborne Breeders' Futurity and was runner-up in the GI Breeders' Cup Juvenile.

“Sometimes when horses race until they're five, you sort of forget about their 2-year-old career,” Taylor joked. “But the fact that he won a Grade One at two, that says everything. Everybody's looking for that.”

At three, Knicks Go failed to make it to the winner's circle and was transferred to the Brad Cox barn for his 4-year-old season. He ran undefeated in three starts that year by over 20 lengths combined, with his season culminating in a record-breaking performance in the GI Breeders' Cup Dirt Mile. 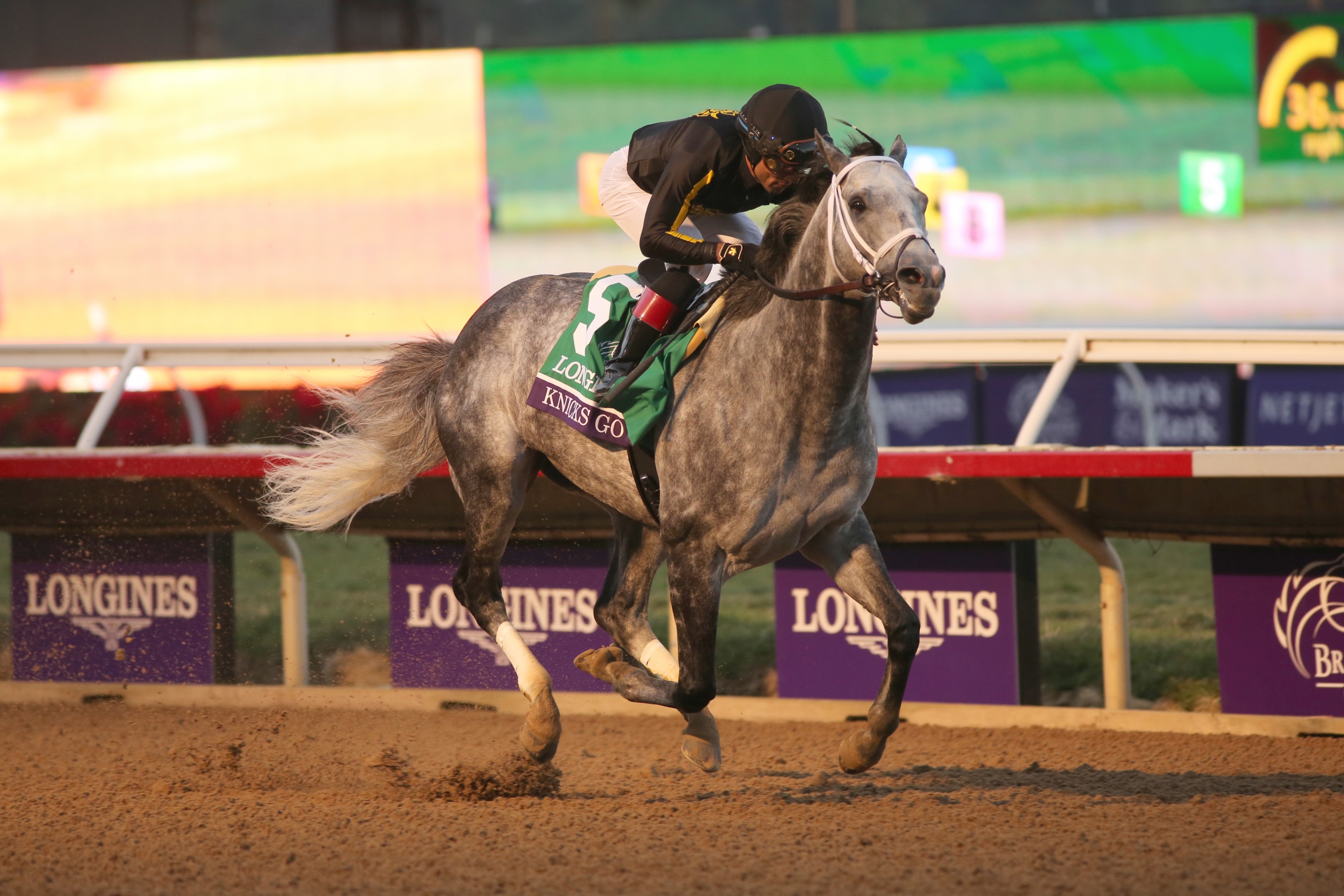 “Knicks Go's best quality as a racehorse is speed,” Taylor said. “I remember Mr. [John] Gaines used to say that we're trying to breed the horse that has the most speed, that is the best looking and that can carry the speed the farthest. That's the kind of horse everybody is looking for. Not only can Knicks Go run fast, but he can carry the speed. Setting the track record in the Dirt Mile, that was quite an accomplishment that shows he has the speed. Then to go under two minutes for a mile and a quarter [in the Classic], that takes a special horse. Those two achievements set him apart from other racehorses.”

Taylor said that their team first started speaking with the Korea Racing Authority regarding their superstar's stud career as the colt was training up for the Whitney S. this summer.

“We knew they weren't wanting to sell part of the horse and they knew we do good marketing and work hard,” he explained. “When we started doing our research, we found that he was a perfect fit for us so we went for it.”

Knicks Go will begin his stud career with a $30,000 stud fee. He joins the growing Taylor Made roster alongside MGSW Tacitus, a regally-bred son of Tapit who will stand for $10,000.

“For us, it's hard to go out and buy a horse like this,” Taylor said. “We have to have some breaks in getting our stallions. You haven't ever seen us standing 20 or 25 stallions because we don't have the financial power to do that. But we do have the hustle and we do a good job with our stallions. We're aggressive and we're always trying new things.”

At a farm once home to the likes of heralded Unbridled's Song, as well as Saint Ballado and Forestry, Taylor Made's stallion program has welcomed several promising new additions in recent years.

“When you run a stallion operation, horses help each other,” Taylor noted. “Now we have Not This Time, who has shown that we have a proven stallion on the rise, and then with Instagrand, Instilled Regard, Mshawish and Midnight Storm, we have new blood at Taylor Made. So we have faith and we think Knicks Go is going to be a good one.”