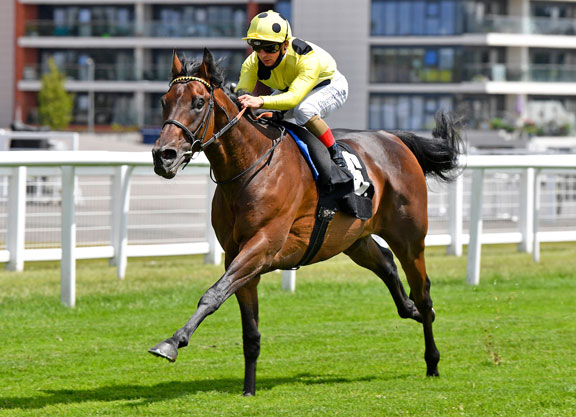 Sheikh Mohammed Obaid Al Maktoum's 350,000gns Tattersalls October Book 1 yearling Lord Campari (Ire) (Kingman {GB}) ran sixth behind the 'TDN Rising Star' performance of Palace Pier (GB) (Kingman {GN}) over seven furlongs in his Aug. 30 debut at Sandown and exploded onto the scene with a Rising Star of his own when upped to one mile in division one of Saturday's It's Not Rocket Science With MansionBet Novice S. at Newbury. The 15-8 second favourite was sharply into stride and on the front end from the outset. In command on the bridle for the most part, the response was immediate when shaken up approacing the final furlong and he bounded clear in taking fashion to easily account for previous winner Tsar (GB) (Kingman {GB}) by an impressive 4 3/4 lengths.

“He jumped on my foot when I was saddling him, so he has redeemed himself well and the win has made me feel better,” revealed in-form trainer Roger Varian. “We liked him last year, but he is a big, raw horse. He travelled nicely and quickened well and it was a nice seasonal debut. We will see how he is in the morning then take it from there.”

Lord Campari, half-brother to an unraced 2-year-old filly by The Gurkha (Ire), becomes the second scorer from four runners for Listed Boadicea Fillies' S. winner Blanche Dubawi (Ire) (Dubawi {Ire}), herself the leading performer out of G3 World Trophy victrix Dixie Belle (GB) (Diktat {GB}). The latter is herself the leading performer out of an unraced daughter of the dual stakes-placed Mareha (Ire) (Cadeaux Genereux {GB}), who in turn is a half-sister to G2 Futurity S. runner-up Chapel Crescent (Ire) (College Chapel {GB}).