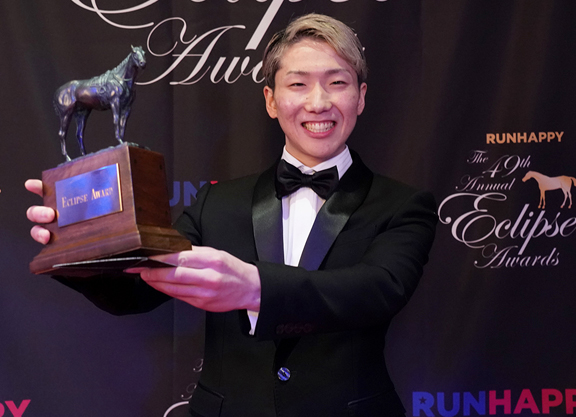 Grade I-winning jockey Kazushi Kimura, who was named the 2019 Eclipse Award Outstanding Apprentice Jockey, will spend the winter of 2020/21 riding primarily for Prince Sultan bin Mishal bin Abdulaziz in Saudi Arabia, he confirmed to the TDN on Sunday.

“Yes,” Kimura told the TDN regarding his Saudi Arabian posting. “I'm gonna ride in Saudi Arabia until the middle of March, then I will be back to Woodbine before the opening day.”

Kimura, who was also Canada's Outstanding Apprentice Jockey in 2018, celebrated four graded winners in 2020 led by Gretzky the Great (Nyquist) in the GI Summer S. His other graded victories include Lady Grace (Kantharos) and Artie's Princess (We Miss Artie) at Grade II level and Field Pass (Lemon Drop Kid) in the GIII Ontario Derby. From 2,152 total mounts, the Japanese-born reinsman has booted home 337 winners (16%) with an in-the-money percentage of 44%. His mounts' earnings stand at $11,163,055 in North America.

Through Jan. 3, Kimura has already had two rides at King Abdulaziz Racecourse in Riyadh. Kimura rode the unplaced G K Chesterton (Ire) (Poet's Voice {GB}) for Nawa Faihaan Almundeel on New Year's Day. His first run for his patron Prince Sultan bin Mishal was a 13th aboard Shuman (KSA) (Commissioner) in a local maiden on Jan. 2. However, it is surely only a matter of time before the young jockey returns to the winner's circle.

“Yes, I've been getting good experience [in Saudi Arabia] so far,” the 21-year-old added.