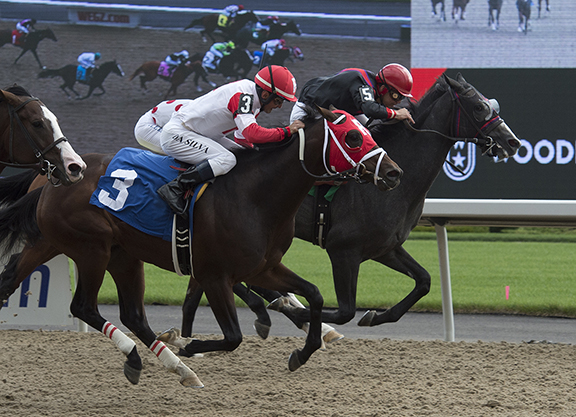 Kazushi Kimura winning one of five races on the Oct. 12 card aboard Insider Trading | Michael Burns

They come from all over the world to ride in North America and do so for obvious reasons–the racing and purses here are among the best on the planet. Jockeys from Latin American countries now dominate the sport and France has produced three of the top riders in the U.S. in Florent Geroux, Flavien Prat and Julien Leparoux. Now, a new country needs to be added to the list.

There's very little, if any, history of a young jockey from Japan coming here and being successful. But that's exactly what 19-year-old apprentice Kazushi Kimura is doing at Woodbine. After getting off to a slow start at the meet, he is now among the hottest riders on the grounds and riding for many of Canada's top outfits, including Mark Casse.

“We don't usually ride bug riders, but we have started using this one,” Casse said. “I think he's a good rider who could turn into a very good rider.”

The idea to come to Canada from Japan did not originate with Kimura, who won his first ever race June 9 at Woodbine. A year earlier, another apprentice, Daisuke Fukumoto, came from his native country to Woodbine to ride. Though he has not had nearly the success Kimura has had, he showed his fellow countryman that the transition from the Far East to Canada was something that could be accomplished. Both could have stayed in Japan, which has astronomical purses, but it is not easy to get going there. A jockey cannot just show up and say they want to ride; they have to be extended an invitation by the Japanese Racing Association in order to get started. Kimura decided not to wait.

“My family wanted me to stay in Japan, but I wanted a challenge, so my family said OK, go ahead,” said Kimura.

Kimura actually came to Canada in 2017 but was not able to get a license because he did not have the proper paperwork in order. Horsemen there remember the sight of the teenager spending his mornings sitting in the grandstand by himself watching workouts. He was 18, spoke no English at the time, was alone in a foreign country and couldn't gallop horses or do any work of any kind.

Most people in that situation wouldn't have lasted long, but Kimura got the break he needed when trainer Reade Baker took an interest in him.

“All that fall, you'd just see him sitting in the grandstand by himself,” Baker said. “Finally, one day he came over to me. He came over to me and introduced himself. Nobody understood anything after that as he didn't speak hardly any English. He showed me a video of himself galloping horses in Japan and I knew right then he was further advanced at the same stage than Daisuke was. I told him as soon as he got his papers in order we'd get him some work. He came back and he worked for me for the first four months this year.”

Kimura returned to Japan at the end of the 2017 Woodbine meet and returned in March. He had gained clearance to work in Canada, but still needed to pass several tests before he could get a jockeys's license. One included a 60-question exam that was in English. To prepare, he and a Japanese exercise rider left the track every morning after training hours and went to the library of a local college and read books in English. He learned enough to not only pass the exam, but to be able to communicate with trainers, and his language skills seem to be improving by the day.

Still, he struggled to get mounts at first.

“It was very difficult to get good mounts at first,” Kimura said. “Nobody knew me. And I needed more practice.”

What many Woodbine trainers probably didn't know was that he had already developed skills well beyond those of the normal apprentice. His parents own a training center in Hokkaido, Japan and he says he has been riding since he was six and preparing to be a jockey since he was 10. He is also a graduate of the JRA's riding academy.

“He's much better than what you see in the modern day bug boys,” Baker said. “They don't compare to what they looked like 30 years ago when they came up differently. He has a great future. He still has to go through that post-apprentice slump they all go through and we'll see how he responds to that. Now, he's a little too enthusiastic on the horses and is bumping into some people, but he's a good learner in the morning. Daisuke had trouble getting started because of the language barrier and this kid spoke much better English right off the bat.”

Heading into Friday's card, Kimura was sixth in the jockey standings with 55 wins from 377 mounts and a 15% win rate. He's also won 15 races at Fort Erie.

Kimura turned many a head Oct. 12 when he had five wins in a single day. Surely, the best is yet to come. He has momentum, has picked up mounts for Casse and is now riding regularly for the meet's leading trainer Norm McKnight.

He also will have the benefit of having his apprentice allowance for some time to come. Because there is no winter racing in Ontario, the off time does not count against a bug's allowance as long as they do not ride somewhere else. Kimura said he will again return to Japan when Woodbine closes Dec. 16. He will not lose his five-pound weight allowance until mid-October, 2019, which makes him the early favorite to be named Eclipse Award apprentice next year.

Kimura says he's here to stay, that he has no designs on riding in Japan. His long-term goal is to become a top rider in the U.S. He mentions wanting to win races at places like Del Mar, Saratoga and Keeneland. He wants to test himself.