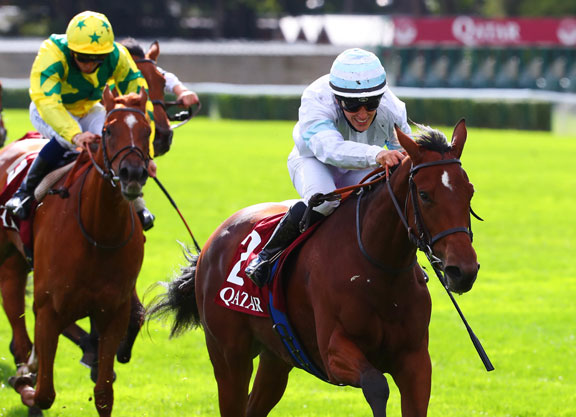 Saturday sees some leading Classic prospects for 2021 look to cement their claims, with intriguing 2-year-old action at Saint-Cloud, Doncaster, Newbury and Leopardstown. The French venue gets it all underway, with the G1 Criterium International playing host to Godolphin's unbeaten 'TDN Rising Star' La Barrosa (Ire) (Lope de Vega {Ire}) who tackles an extra furlong having gone through the motions in Ascot's “Future Stayers' Maiden” on Sept. 4 and the G3 Tattersalls S. at Newmarket on Sept. 24. Charlie Appleby said he has no concerns about the distance, with this race restored to its original trip from seven furlongs as part of a two-year trial.

“La Barrosa is stepping up to a mile for the first time, which we feel will suit,” he said. “He brings a nice profile going into the race, having won both his starts to date. It's going to be very testing ground at Saint-Cloud, but we are confident with his pedigree that should suit him. He did show his class to win from the position he was in at Newmarket, but he has got to improve again stepping up to a Group 1.”

O'Brien's day is expectedly busy and 10 minutes after the Criterium International the stable's Oct. 11 G3 Anglesey S. runner-up Lipizzaner (Uncle Mo) takes part in the six-furlong Listed Doncaster S. and then it is on to the G1 Criterium de Saint-Cloud. Rosegreen's representative in this 10-furlong contest is last Friday's impressive Leopardstown mile maiden winner Bolshoi Ballet (Ire) (Galileo {Ire}), who puts his 'TDN Rising Star' status on the line against some high-class domestic runners headed by Miguel Castro Megias's Aug. 16 G3 Prix Francois Boutin and Oct. 4 G1 Prix Marcel Boussac heroine Tiger Tanaka (Ire) (Clodovil {Ire}). “He ran green at Newmarket first time out, but then he won well at Leopardstown the next day,” O'Brien said of the full-brother to Southern France (Ire). “There's lots of stamina in the pedigree, so you wouldn't be too worried about stepping up to 10 furlongs. Hopefully he runs well.” Tiger Tanaka's now-famous jockey Jessica Marcialis told Le Parisien, “Apart from the Marcel Boussac, Tiger has often run against the colts,” she said. “We don't yet know her limits, so this will be an opportunity for us to learn more.”

His Highness The Aga Khan's unbeaten Makaloun (Fr) (Bated Breath {GB}) handled both nine furlongs and heavy ground with ease when registering a five-length success in the G3 Prix de Conde at Chantilly on Sept. 28 and will be a tough nut to crack attempting to provide Jean-Claude Rouget with a third renewal. Godolphin supply Botanik (Ire) (Golden Horn {GB}), who hails from the Andre Fabre stable successful six times and he looked one to relish this trip when scoring by three lengths in a mile maiden at the track Sept. 23. The operation's Lisa-Jane Graffard commented, “Botanik is in great form and his work has been encouraging leading into this. He seems at ease on this type of ground, but with young horses it is always less certain. We don't yet know if he has the level of ability to win a Group 1 race, but Andre has prepared him for this and couldn't be happier with his condition.”

Hot on the heels of the Criterium de Saint-Cloud is the G1 Vertem Futurity Trophy, which features another Ballydoyle-Godolphin clash as the Sept. 13 G1 Vincent O'Brien National S. and Oct. 10 G1 Dewhurst S. runner-up Wembley (Ire) (Galileo {Ire}) bids for compensation. One more win for Aidan O'Brien would see him tie with Sir Henry Cecil on 10 and the stable's sole representative looks well up to standard, particularly on his latest piece of form in what was rightly heralded as a top-class renewal of the Newmarket contest. “Obviously he ran a great race in the Dewhurst and before that the National S., so he's got Group 1 form,” the Ballydoyle handler said. “He seems to have been in good form since. He is stepping up to a mile for the first time, but we don't think that is going to be an issue. Hopefully the ground isn't that soft–the better it is, the more he'll like it.”

Charlie Appleby again provides the main opposition, with One Ruler (Ire) (Dubawi {Ire}) impressing when brushing aside Van Gogh in the aforementioned Autumn S. over this mile trip at Newmarket. “He has handled the juice well at Newmarket and will be going there as a serious player,” his trainer said. “He is out of a French family and generally they run on the slower side of good, so the ground wouldn't worry me. Getting the trip last time and seeing that improvement was key for me. On the mare's side she was a miler and he shows a lot of natural pace, but he saw that mile out well. I don't see him at the moment being a mile-and-a-half horse, at this stage, but we will let him winter away first. He did what he did at Newmarket and he did get beat on the flat track at Doncaster, but I think that was a bit of inexperience and tactically we rode a different race to what we had done on his previous starts.”

Few would rule out an Andrew Balding trainee and in Apollo Racing and DTA Racing's King Vega (GB) (Lope de Vega {Ire}) the Kingsclere handler has a live contender following his latest second in the G3 Solario S. over seven furlongs on Aug. 23. “I think he's probably the highest-rated maiden in the country, but I'm sure there are plenty of unraced horses that are pretty decent waiting to come out,” he said. “He's a horse we've always rated very highly. He ran a very decent race in the Solario and the extra furlong will certainly be to his advantage. It's going to be slow ground. Lope de Vegas tend to go well with dig in the ground. He was worked on the grass here in the last three weeks. He seems to enjoy a bit of ease and I don't think the ground conditions will be too much of a concern for him.”

There is no time to take breath, with Newbury coming in on the action five minutes after the Futurity as Normandie Stud's 'TDN Rising Star' Love Is You (Ire) (Kingman {GB}) takes aim at the seven-furlong Listed Racing TV S., registered as the Radley. The daughter of the G1 Coronation S. winner Fallen For You (GB) (Dansili {GB}) earned that tag on the same card as the Criterium International protagonist La Barrosa and looks very much a potential Classic prospect, but has heavy ground to deal with here along with Godolphin's Sept. 30 Nottingham maiden scorer Little Kitten (Ire) (Sea the Stars {Ire}). One who should handle the surface is John Fretwell's Gift List (GB) (Bated Breath {GB}), who should appreciate the step up from six furlongs having finished runner-up and beaten all on her side of the track in Newmarket's £150,000 Tattersalls October Auction S. on Oct. 3. Trainer Karl Burke said, “She's in great form. She came out of the race at Newmarket really well. She's fresh and well, she deserves the chance to get some black-type. That's what we're trying to do. I'm not saying she's definitely going to win, but she'll put up a good show.”

Also at Newbury, the G3 Molson Coors Beverage Company S., or Horris Hill as it is known, will see Sheikh Hamdan Al Maktoum's Laneqash (GB) (Cable Bay {Ire}) start a warm order having split the subsequent G2 Royal Lodge S. winner New Mandate (Ire) (New Bay {GB}) and One Ruler when second in Doncaster's Listed Flying Scotsman S. on Sept. 11. It may not be plain sailing, however, with three of the unexposed types being the unbeaten Percy's Lad (GB) (Sir Percy {GB}) from Eve Johnson Houghton's yard and a pair who scored at Salisbury at the start of the month in the David Menuisier-trained Autumn Twilight (Ire) (Buratino {Ire}) and Gary Moore-trained Champagne Piaff (Fr) (Le Havre {Ire}). Menuisier, whose career has taken off in the last month, said of Autumn Twilight, “He won first time out and he looked very professional. He seems to have come out of the race well. He's entered in the horses-in-training sales next week, so rather than take it steady, steady, I prefer to run him in a race like this and see how he goes rather than take the easy route. He'll be going to another yard, so I might as well see how he good he is now. He should really enjoy the ground. We've been happy with him, so we feel there's not much excuse really. We go there with no pressure. Let's hope he runs well.”

At Leopardstown, another Ballydoyle maiden winner with Classic pretensions is Carlisle Bay (Ire) (Galileo {Ire}) who scored with authority over nine furlongs at Tipperary on Oct. 3 and lines up in the G3 Eyrefield S. over the same trip. Shadwell's 'TDN Rising Star' Wuqood (GB) (Dubawi {Ire}) is in opposition, but needs to settle better than when seventh in the G2 Beresford S. over a mile at The Curragh on Sept. 26.

Of the other pattern races across Europe, the G3 Prix Perth at Saint-Cloud sees Gestut Schlenderhan's Alson (Ger) (Areion {Ger}) return to the scene of his emphatic success in the G1 Criterium International 12 months ago, while the fillies and mares take in the 10 1/2-furlong G3 Prix de Flore. The Aga Khan's unbeaten Zaykava (Fr) (Siyouni {Fr}), a prized possession as a daughter of Zarkava (Ire) (Zamindar), took the Oct. 9 Listed Prix Charles Laffitte over a mile and a quarter at Compiegne last time and is an exciting prospect on a day replete with them.