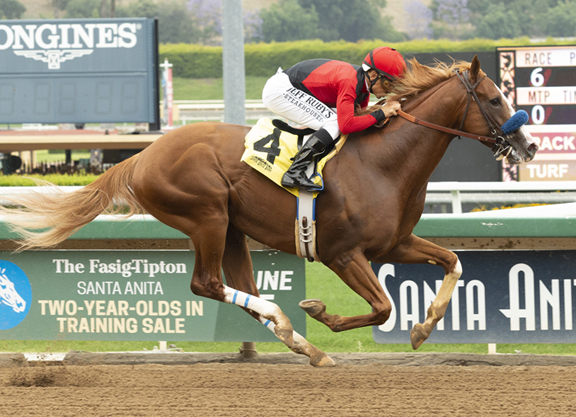 King Jack (c, 3, Jimmy Creed-Light Shine, by Tapit) stamped himself as one to watch this summer with a 'TDN Rising Star' debut performance, the second on the card at Santa Anita Saturday.

The 5-2 chance hinted ability in the a.m. for Hall of Famer Jerry Hollendorfer, led by a five-furlong bullet in :58 1/5 (1/9) at Los Alamitos May 10. He broke well and pressed from a three-wide third through an opening quarter in :22.17. The flashy chestnut ranged up with a good-looking, three-wide bid on the far turn, took over at the top of the stretch and bounded clear down the lane to graduate by three promising lengths.

Fellow firster Morning Snow (Morning Line), a $300,000 EASMAY graduate and 6-5 favorite for the Bob Baffert barn, stayed on for second after setting a pressured pace.

King Jack was acquired by bloodstock agent Tom McGreevy on behalf of owner Michael C. Stinson for $100,000 at the 2017 KEESEP Sale. The unraced mare Light Shine, a half-sister to graded winners Scrappy T (Fit to Fight) and Tar Heel Mom (Flatter), was a $490,000 KEESEP yearling purchase by Spendthrift Farm in 2011. She produced a Temple City colt in 2017, a Brody's Cause filly in 2018 and a colt by the latter sire this year.