Stinson, McGreevy on the Fast Track 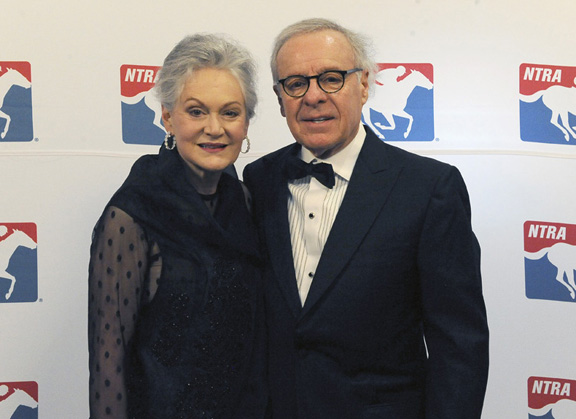 The 72-year-old native of Texas had already campaigned about a half dozen or so stakes winners in New Mexico, but is clearly playing at an entirely differently level now as he makes his way to Louisville with his first Breeders' Cup runner in 'Future Stars Friday's' featured Juvenile with impressive Santa Anita maiden winner Dueling (Violence).

“The only way that I would participate at the level that I am now is a result of partnering with Tom McGreevy,” Stinson said. “Tom is such a unique talent. It was a very big deal for us to be able to partner with him. In our first crop together to have a colt that is going to the Breeders' Cup is beyond a thrill for me and my family.”

A self-described “small business guy for his entire life,” the now-retired Stinson was one of the partners in the ownership group Taylor Made formed for two-time Horse of Year California Chrome. He also bought into New Mexico hometown hero Pepper's Pride after she concluded her brilliant racing career undefeated with 19 victories.

“I've been around it for a long time and love the sport,” said Stinson, who added that he shares his passion for racing along with his wife Linda of 45 years. “I lived in Texas my whole life and we spend summers in New Mexico, so that's where we've run horses for a number of years. I've been going to the races in New Mexico since I was six or seven years old. I love it and you have to, to participate in it.”

It was through Stinson's longtime relationship with Taylor Made that opened the door for him to join forces with Rick Porter's former right-hand man, who selected Fox Hill superstars such as 2011 Horse of the Year Havre de Grace (Saint Liam) and two-time champion and 'TDN Rising Star' Songbird (Medaglia d'Oro).

Dueling was the most expensive of six yearlings acquired at last year's Keeneland September Sale by McGreevy on Stinson's behalf, bringing $475,000.

Stinson has continued to add to his growing stable this year, purchasing six yearlings, led by a $410,000 Distorted Humor filly, at Keeneland September for a total of $1.91 million; a $410,000 Pioneerof the Nile filly and $210,000 Goldencents filly at Fasig-Tipton Saratoga; and a $725,000 Bodemeister colt at the OBS March 2-Year-Old Sale.

“We bought 10 yearlings last year and we've bought nine horses this year–that's sort of our model,” Stinson said. “We'll buy six to 10 a year. We're not the mega buyer–we have a range that we're trying to hit. The purchasing end of it from a decision standpoint is all Tom. His record speaks for itself. I'm just along for the ride. He's the guy and Jerry Hollendorfer trains our horses in California and John Servis currently has some horses for us back east.”

McGreevy added, “Mr. Stinson is not only a great owner, he's a great person. He's just a pleasure to work for and work with. He's so enthused about the racing industry. There will be nobody more excited than him to get to the Breeders' Cup. He followed all the horses that I've bought over the years and he wasn't trying to reinvent the wheel. He just wanted to give me a chance to do my job and see if we could get lucky enough to get a good horse.”

Dueling certainly looks like he could be a good horse. Second in his first two starts sprinting, including a runner-up finish as the 4-5 favorite behind unbeaten 'TDN Rising Star' and likely Juvenile choice Game Winner (Candy Ride {Arg}), he took a big step forward in his two-turn debut, graduating smartly by 2 3/4 lengths last time Sept. 28.

The long-striding gray is listed at odds of 20-1 on the morning-line while adding blinkers for the first time in the Juvenile.

“I think back years ago when Mr. Gaines had the brainchild of the Breeders' Cup-I'm not sure very many people could envision what it would evolve into,” Stinson concluded. “It showcases the things that are the very best about our sport-the people, the horses, the human interest stories, etc. It's just terrific. And of course, for a little guy like me to have an opportunity to have a horse participate, it's just a dream come true. I couldn't be happier. I'm a very lucky guy.”