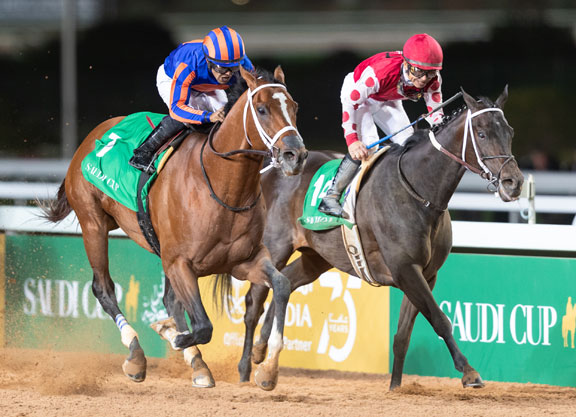 The Jockey Club of Saudi Arabia (JCSA) announced Monday that it will continue to withhold payment from the $20-million Saudi Cup to the connections of Maximum Security (New Year’s Day) as it continues to investigate the circumstances surrounding the horse and former trainer Jason Servis. While that money is being withheld, a decision has been made to go ahead and pay the owners who had horses finish second through 10th in the Feb. 29 race.

Shortly after Saudi Cup, Servis was among 27 people indicted on federal charges involving the doping of race horses. In April, Saudi authorities announced they would withhold paying out the purse to all connections while an investigation was ongoing. The Saudi Cup winner is due to collect $10 million.

Monday’s announcement revealed for the first time that there was an “objection to the participation” of Maximum Security after the race. It did not spell out who lodged the objection and when. The JCSA said the objection and the indictments were what led to the investigation.

It also appears that no final decision will be reached until the case against Servis is adjudicated in the U.S. courts, as the JCSA said their investigation has been hampered by not being a party to the legal proceedings that are ongoing.

The statement read: “That investigation remains ongoing but has been hampered by the Covid-19 crisis and the fact that the JCSA is not a party to the ongoing legal proceedings in the USA. Therefore, unless and until the evidence that supports the sealed indictment in the US Proceedings is placed in the public domain, that evidence is unavailable to the JCSA’s investigation and to any JCSA inquiry. The JCSA is bound to reach a fair and reasonable decision on the objection and circumstances of MAXIMUM SECURITY’s running in the race and it cannot do so without the consideration of relevant evidence that has been gathered by the prosecution authorities in the US Proceedings in respect of the sealed indictment. Therefore, the JCSA cannot properly conclude its investigation and any inquiry by its Stewards’ Committee cannot be commenced without consideration of all relevant evidence including that gathered by the prosecution authorities in the US.”

That could mean that the payment of the purse will be withheld until Servis’s case has made its way through the courts, something that could stretch on for a couple of years.

The JCSA said it would make no further comment until the conclusion of the investigation, which leaves a handful of questions unanswered, including the results of drug tests performed on Maximum Security before the race.