Japanese Horse of the Year Jungle Pocket Dead at 23 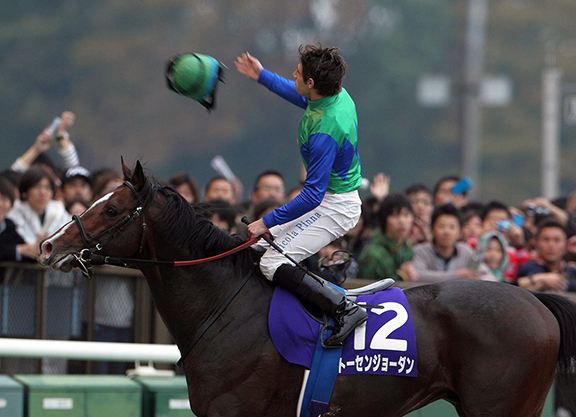 Tosen Jordan, one of the best runners by the late Jungle Pocket | Horsephotos

Bred by Northern Farm and campaigned by Katsumi Yoshida, the May foal won two of three starts at two including the Sapporo Sansai S. in September of 2000 before a second-place finish in the Radio Tampa Hai Sansai S. Back in the winner's circle in the Kyodo News Service Hai, he was third in the Satsuki Sho (Japanese 2000 Guineas) before rebounding to take the Tokyo Yushun (Japanese Derby) in May of 2001. Only third in the Sapporo Kinen that August and fourth in the Kikuka Sho (Japanese St Leger) that October, he claimed his Group 1 in the Japan Cup by a neck over T.M. Opera O (Jpn) (Opera House {GB}) that November. He was named Japanese Horse of the Year and Champion 3-Year-Old of 2001.

Shelved until March of his 4-year-old year, Jungle Pocket ran second in the G2 Hanshin Daishoten and filled the same spot in the Tenno Sho (Spring) in April. His final two runs were off-the-board finishes at Nakayama in the G1 Japan Cup and G1 Arima Kinen. The Katsumi Yoshida colourbearer was retired to stand at Shadai Stallion Station with a mark of 13-5-3-2 and $5,788,198 in earnings.

Besides standing at Shadai in the Northern Hemisphere, he moved to the Breeders' Stallion Station in 2013 and also shuttled to Rich Hill Stud in New Zealand for a few seasons. He sired 29 black-type winners, 16 of them at the group level. Among his best progeny were Group 1 winners Tosen Jordan (Jpn), Aventura (Jpn), Queen Spumante (Jpn), Jaguar Mail (Jpn) and Jungle Rocket (NZ). As a broodmare sire, Jungle Pocket's daughters have foaled 10 black-type winners, six at the group level. Although he does not have a Group 1 winner in that sphere yet, Group 2 winner Mikki Swallow (Jpn) (Tosen Homareboshi {Jpn}) ran third in the G1 Tenno Sho (Spring) and fellow Group 2 winner Solveig (Jpn) (Daiwa Major {Jpn}) was third in the G1 Sprinters S.